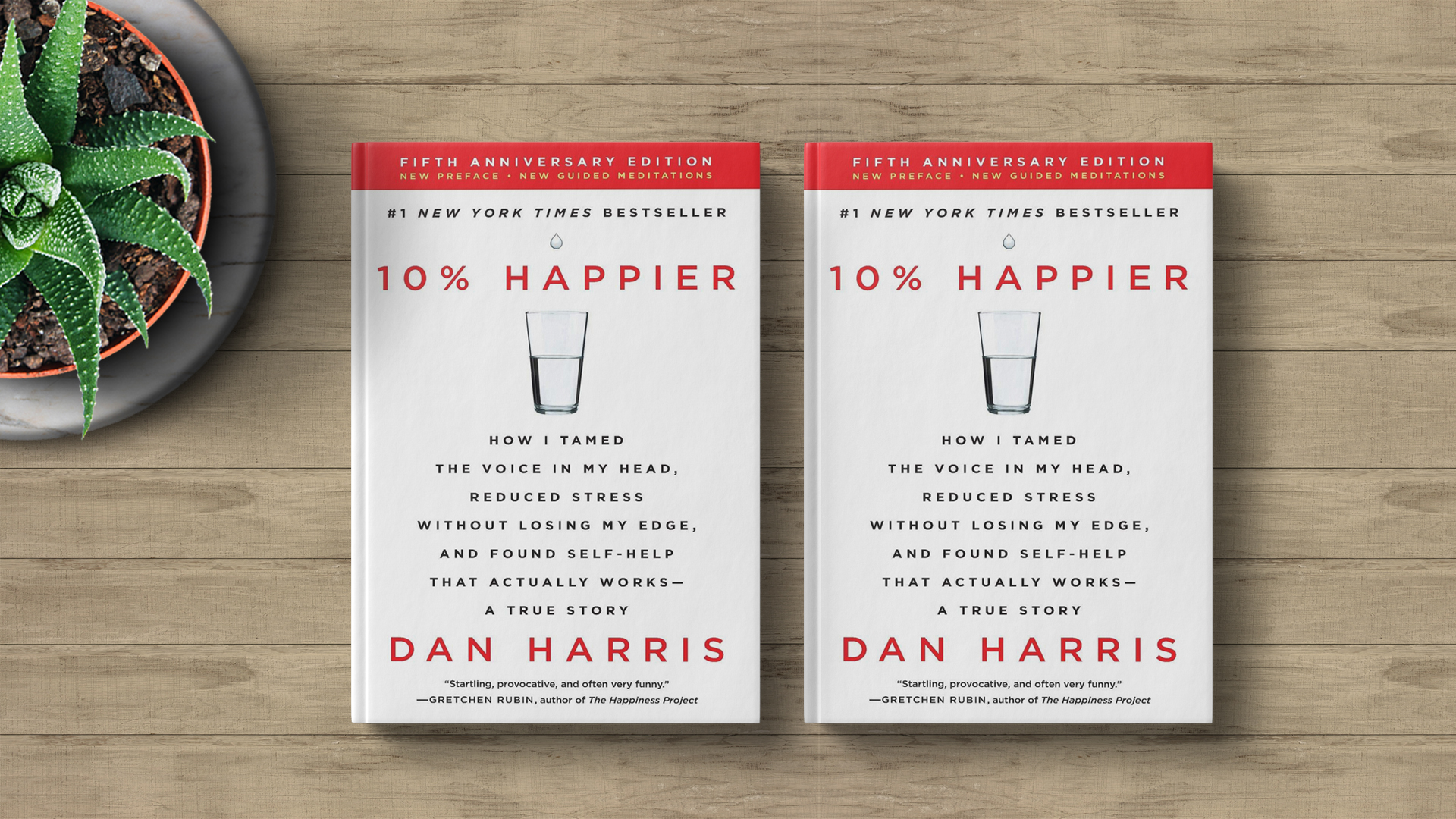 The Voice in My Head Is an A-hole was Dan Harris' initial title for this book.

He, like most of us, noticed that the voice in his brain began as soon as he opened his eyes in the morning throughout his profession as a writer and reporter. Then it bothers us with ideas of the past and future for the rest of the day, much to the disadvantage of whatever we are doing in the present.

He didn't uncover the route to enlightenment. Still, he did discover that a lot of activities he performed, when done collectively, made him 10% happier.

Where does a tenth of a percent originate from? In short, what you're going to discover made Harris a considerably happier and more productive individual. However, he didn't have a life-changing encounter that put him in a state of complete pleasure.

Finally, to explain why he now devotes so much time to mindfulness and meditation, he claims it makes him 10% happier. A completely arbitrary figure, yet one that perfectly illustrates why he does what he does.

Join me on a quest to become 10% happier in everything you do if you can silence the noise in your brain for the next 12 minutes.

The Voice in Your Head

When Dan Harris had an on-screen outburst, it was one of the pivotal moments in his career. After years of killing his on-screen time at ABC, he suffered a full-fledged manic episode in front of millions of individuals.

It was the result of years of tension brought on by his mind's constant chatter. That week, how many stories did he have on the air? What was his current relationship status with his boss (the great Peter Jennings)? What else did he have planned to put him ahead of the competition for the lucrative positions about to become available?

That was the start of his journey of self-discovery. That he would have to find a means to silence the voice in his brain if it happened again, which would very certainly be the end of his on-air career.

He began to read the literature he had never considered previously, such as Eckhart Tolle's The Power of Now. He was so taken with the book's principles that he sought out Tolle for an interview.

The issue, according to Tolle, is our ego. Our inner storyteller is the ego, and it is never pleased. It constantly wants more, no matter how many creature pleasures we gather, how many gourmet meals we consume, or how many rungs we ascend on the employment ladder.

One of the most serious issues with our ego is that it is a comparison machine. It is always evaluating itself in comparison to others. That explains why we are always comparing ourselves to others' appearances, riches, and social standing.

Finally, and probably most importantly, it does so while reflecting on the past and future. We live almost solely via recollection and expectation, as Tolle puts it.

This is a serious issue since now is the only time we will ever have in the literal sense.

Harris' major takeaway from studying people like Tolle and academics conducting rigorous research on the human mind was that the brain can be taught.

Thus, happiness is a talent.

Once you've started along the path to happiness, you'll nearly always come back to the concept of mindfulness, and hence to Buddhism's precepts and concepts.

According to Buddha, we have three natural responses to whatever we encounter in our life: we desire it, reject it, or zone out.

Butter tarts: a delectable Canadian treat difficult to come by south of the border? It's something I want. Flies in the home because the front door was left open? Refuse it. What's the most recent celebrity rumor? I lose track of time.

Everyone reacts to things in their own unique manner, yet they all fall into one of those three categories.

But, there is a fourth alternative, awareness, that is far more beneficial than assessing an event. One of Harris' mindfulness teachers gave him a formula called RAIN, which stands for Recognize, Allow, Investigate, Non-Identification.

Let's imagine you've recently experienced a stressful situation, such as being passed over for a key promotion at work, to walk through this procedure and see how it works.

The first step would be to acknowledge that you've just had a stressful experience and you're experiencing all of the feelings associated with it.

The next stage is to immerse yourself in the experience. The purpose of mindfulness is to be completely present in the world rather than detached from it. Don't fight the feelings or experiences you're having. Allow them to take place.

We begin to pay attention to how the event is influencing us in the present time in this stage.

Begin by taking a look at your own physique. Do you have a blush on your face? Do you have a pounding headache? Is your breathing shallow and quick? Almost every emotion has distinct bodily manifestations; your task is to become acquainted with them.

We intentionally bring to mind the idea that although we feel angry and jealous now because we were passed over, it doesn't imply we are mad and jealous.

After you've completed the RAIN cycle of fully being present to your experiences and feelings, you may finally let it go. You can go on to whatever comes next, such as returning to work so that the next time a promotion becomes available, you'll be ready for it.

As Harris' voyage of discovery progressed, he began to delve further and deeper into what made him a happier and more productive person.

He condensed what he learned into ten principles he refers to as The Way of The Worrier.

The Way of the Worrier

One of the best aspects of Harris' work is that he gets to interview people with whom most of us can only dream about sharing the same room.

The Dalai Lama is one of the persons on that list. And one of the most important lessons he took away from him was that putting oneself first is a normal human trait.

It turns out that, as the Dalai Lama taught Harris, cultivating compassion for others makes you a happy person. Brain scans revealed that spontaneous acts of generosity towards others recorded in the brain are more like consuming chocolate than satisfying an obligation.

Don't be a jerk, then. It will make you happy, not because it is the right thing to do.

"Praise Allah, but also tie your camel to the post," Sufi Muslims say. In other words, while there are many practical reasons to be courteous to others, do not let the world trample all over you.

This is more difficult than it appears. It takes work to achieve deep inner calm while still getting things done in a competitive atmosphere.

Meditation has been connected to an absurdly lengthy list of advantages. It is currently being used to treat serious depression, drug addiction, binge eating, cancer-related stress, and ADHD.

The simplest approach to get started with mediation is to follow the directions provided to Harris when he initially began.

To begin, sit comfortably with your spine reasonably straight.

Second, pay attention to how you feel as you breathe in and out. Concentrate on one area, such as your nostrils or chest. Use a mantra like "in" and "out" if you find yourself easily sidetracked.

Even if you only do it for a few minutes a day, you will see a difference in your life.

TWOTW #4. The Price of Security Is Insecurity—Until It's Not Useful

Some things are worth being concerned about, while others are not. Separating them from one another, according to Harris, is one of the most important jobs you'll face when you begin your 10-percent happiness path.

This is where he departs from the wisdom of some of the gurus from whom he learned. And this is where you may take comfort in the idea that you don't have to live your life in joy to benefit from mindfulness and meditation.

Stop and ask yourself, "Is this useful?" whenever you find yourself worried about anything.

For example, you should be thinking about ways to get more consumers or cut costs when you need to make more money in business. You may leave worrying about things that aren't essential or that you can't affect the chumps.

TWOTW #5. Equanimity Is Not the Enemy of Creativity

You will not become a blissed-out zombie in your pursuit of happiness. There's a popular misconception that all creative individuals are inspired by sadness.

There is no current study to support either side. Still, it may be argued that once you are free of unnecessary concern, you will be able to channel your creativity more frequently and efficiently.

When your mind isn't overwhelmed with fear and dread, it's much simpler to develop innovative solutions to difficulties.

You'll learn that not everything can be addressed by steady, unyielding pressure sometime along your trip, and you'll make time for meaningful pauses.

You can't open a jar with all of your muscles strained, and you can't solve every difficulty in your life with brute force, either.

When your inner voice isn't scaring you to death, it's telling you how wonderful you are.

This leads to just as many poor choices as fretting about things you can't change. As a leader, this may easily get in the way of achieving the outcomes you desire.

So, if you have those kinds of ideas, go through the RAIN process and let them pass right past you.

Apart from worrying and assuring you how awesome you are, the ego's third key task is to beat you up with self-criticism.

Many individuals believe that following their inner cattle prod is the only way to attain greatness in business and life.

People who practice self-compassion meditation, on the other hand, are more likely to follow a diet and quit smoking, according to Harris. Why? They are considerably better at recovering from setbacks.

Learning from your mistakes rather than berating yourself is a far better strategy.

Have you ever noticed that life does not always go the way you expect it to?

This is about realizing that striving for goals is good, but the end result is out of your hands. Make every effort to achieve, and then relax and let the chips fall where they may.

This means that if you fail (which you will definitely), you can pick yourself up and move on to the next round.

TWOTW #10: What Matters Most

When you are crystal clear on what you want in your business and life, this entire list gets a lot simpler. Get your mind straight on what's most essential to you. Do that instead of merely following your ego, which is always looking for "more."

What are your true desires?