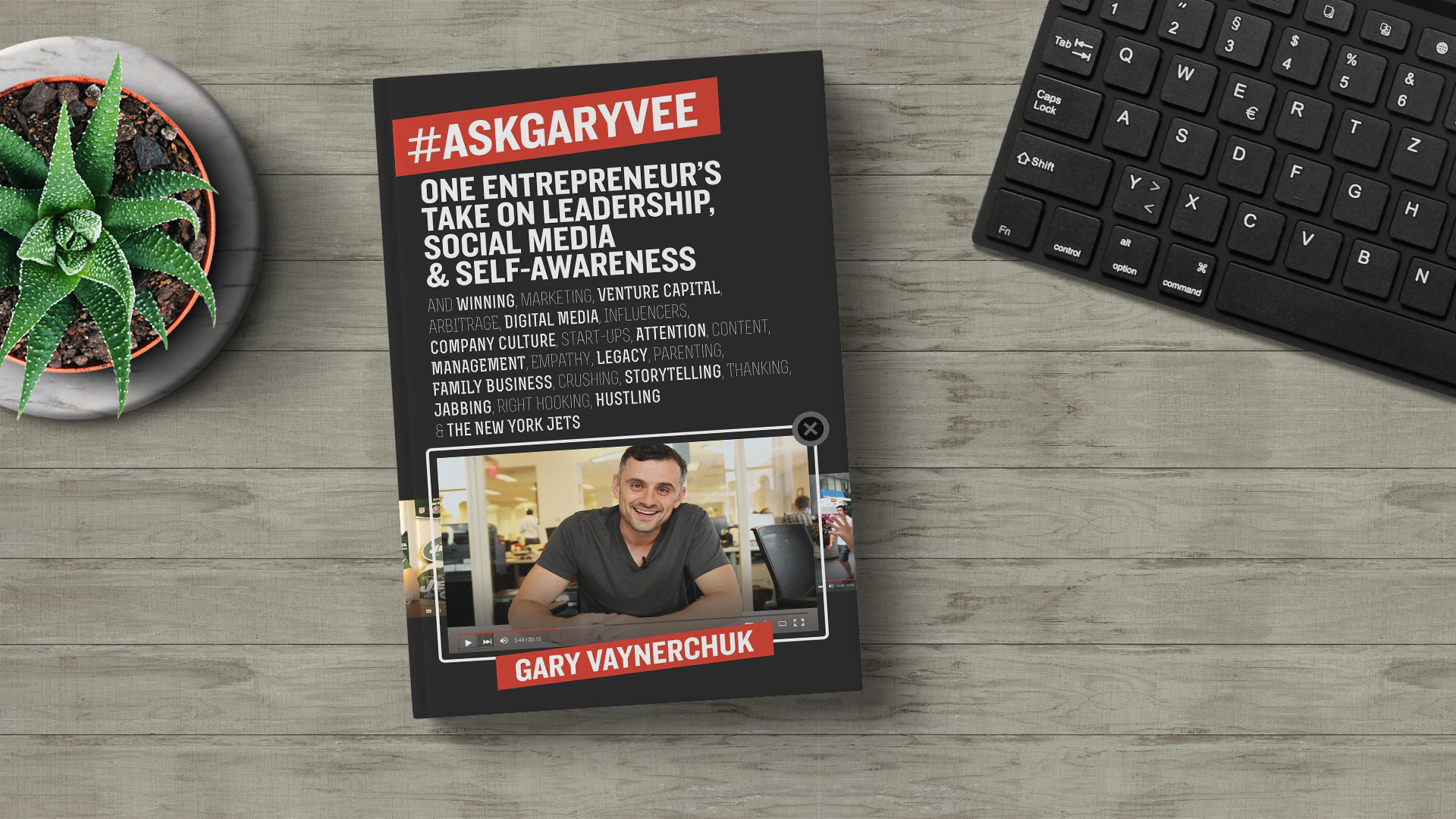 The book #AskGaryVee was written by Gary Vaynerchuk to put his sensational advice from his online video program of the same name into book form.

Why should you pay attention to what he has to say?

He's established two firms worth $100 million a year, and he's arguably the only person to become "Internet famous" only by giving business advice.

VaynerMedia, his current company, is a digital advertising firm that has swiftly risen to revenue of $100 million. That's a remarkable growth trajectory for a company that usually takes a long time to build up.

Here are some of Gary's best tips for becoming an entrepreneur.

Keep Your Head in the Clouds.

This is all about maintaining a 30,000-foot vision of your business and ensuring that every move and decision is guided by a set of principles.

Gary claims that if you devote all of your effort to a few fundamental business ideas most important to you, everything else will fall into place.

You should have your own thoughts and views, but here are Gary's rules to help you get started:

Some of them are only understandable if you are familiar with Gary's work. For example, he doesn't mean actually going out of business. Rather, he suggests always looking for new methods to innovate on "what's next," so you're never left behind by the latest or current competition.

Keep Your Nose in the Dirt.

You must keep your head in the skies while keeping your nose in the mud. The execution aspect of your business is the dirt.

To illustrate this notion, here's an example from Gary.

Understanding the nuances of Gary's company means knowing that an Instagram conversation has a 15-person limit and that infographics are the way to garner attention on Pinterest.

He is a world-class practitioner at the "stuff" his company creates because he immerses himself in the intricacies. Gary claims that by doing so, he can sit down with potential clients and tell them they are working with the finest social media practitioner at the top social agency in the country.

Understanding and delivering on your company's details is a huge distinction.

So, how should you divide your time between clouds and dirt? This is a personal choice that may vary depending on the situation. Still, you should usually stick to a 70/30 split in either direction at any given moment.

Also, keep a watch on cash flow, which is the negative side of the equation. Cash is like oxygen to your business, as Gary puts it. It's a major mistake to ignore customer service or business culture. Still, no mistake will ever damage you more than getting your cash flow incorrect. You will never run out of money.

Gary is renowned for hustling, which is one of his qualities. While he's always talked a great game about being one of the world's hardest workers, he's lately established a video blog capturing his day-to-day existence to back it up.

He is basically in "go" mode from dawn to dusk, frequently returning home at midnight following his last meeting. And he's not only working hard, but he's also attempting to work efficiently.

He describes hustle as putting all of your efforts into your business and making every minute matter.

While the rest of the world laments the "always-on" mentality, Gary sees it as a competitive advantage. He claims that any entrepreneur worth their salt is ecstatic because the Internet allows us to work. At the same time, everyone else plays video games or watches Netflix.

As an entrepreneur, the simplest way to succeed is to work harder. How much of your day is spent idly browsing through Facebook or watching television? Work for an hour or two instead of watching TV.

It may not seem like a huge problem for that day or that week, but over time, those hours might mean the difference between tremendous success and massive failure.

It's straightforward: if you want to expand your business, work hard every day until you've used up all of the juice. Then get back to it the next day.

According to Gary, we're all in sales now, according to best-selling author Dan Pink, and we're all media makers. It's no longer news that we've moved on from the days when television, radio, and print were the only avenues for businesses to reach large audiences. The ability to generate amazing content, on the other hand, hasn't altered.

According to Gary, there are a few basic guidelines for producing high-quality content.

It must first appeal to the heart. Emotion, as usual, takes precedence over intellect. You must generate material that elicits an emotional response from your viewers.

Fourth, it must cut through the clutter. The simplest approach to achieve this is to "respect your audience." For example, if you wanted to sell wine, a blog article on "Five Bottles Under $10 That Help You Get Through the Day When You Have 8-Year-Old Kids" would certainly draw more attention than "Five Reasons My Wine Is The Best!""

Engage with Your Community

The real work comes now that you have amazing content that is helpful or entertaining to your audience.

This is when you can use some of that extra time you saved by not watching Netflix and start connecting with the people you're aiming to target.

Unless you're already a star, the key to success is to provide high-quality material daily and communicate with your audience. "It really is that simple and difficult," Gary explains.

What methods do you use to interact with your audience? You may follow Gary's lead when it comes to leveraging social media for your wine company. He'd go on Twitter and look for individuals asking questions about wine, then respond to them. Those individuals would look at his profile, which included a link to his website, and eventually begin purchasing wine from his online store.

Is engagement a time-consuming process? It is, of course. But, as we've already mentioned, that's simply the way things are these days.

Gary is still the one who sends out all of his tweets, posts on Instagram and creates his Snapchat videos, despite having built and scaled two firms to $100 million in annual sales. So, if Gary can do it, we can definitely do it as well.

In business, self-awareness is crucial, and there are a few things you can do to make it work for you.

The first step is to establish an environment in which individuals around you may tell you the truth. You must understand what you're excellent at, what you're not so good at, and what works and doesn't.

More importantly, you want your staff to feel comfortable doing this, or otherwise, it won't happen. This may include hearing things that irritate you. Still, it is your responsibility to listen to the input and appreciate them for bringing it to your attention.

After you've listened to and considered the input, start focusing your attention and energy on the areas you excel at. Delegate the tasks that you aren't so good at to others.

You've probably given this advice previously (for example, in Now Discover Your Strengths), but it's worth repeating. No one is an expert in every field. The sooner you recognize and realize this reality, the better.

He knew early on that he'd have to do it through video if he wanted to generate magnetic material for his audience. Instead of improving his writing skills, he focused all of his efforts on making the finest video material he could.

Gary sits down and expresses himself orally when it's time to write, including the four business books he's authored and any blog articles he writes for his blog. He delegated the writing to his team, who merely assisted him in putting his thoughts into words.

Likewise, when it comes to your own company, you should devote all of your attention to areas where you can bring the greatest value.

But how do you know what you should delegate to another employee or outsource to a third party? As Gary points out, when you require A-level work, and you're an F, it's a simple option. When you're a B, it's a lot more difficult to make that decision.

If you do an honest evaluation of the circumstance and realize that you won't be able to execute at an A-level on a certain aspect of your business, assign it.

Well, you have it - a couple of Gary Vaynerchuk's best pieces of wisdom. If you want to learn more about this world-class entrepreneur, go to his YouTube account. Watch the video program on which this book is based, or pick up a copy of the book wherever books are sold.