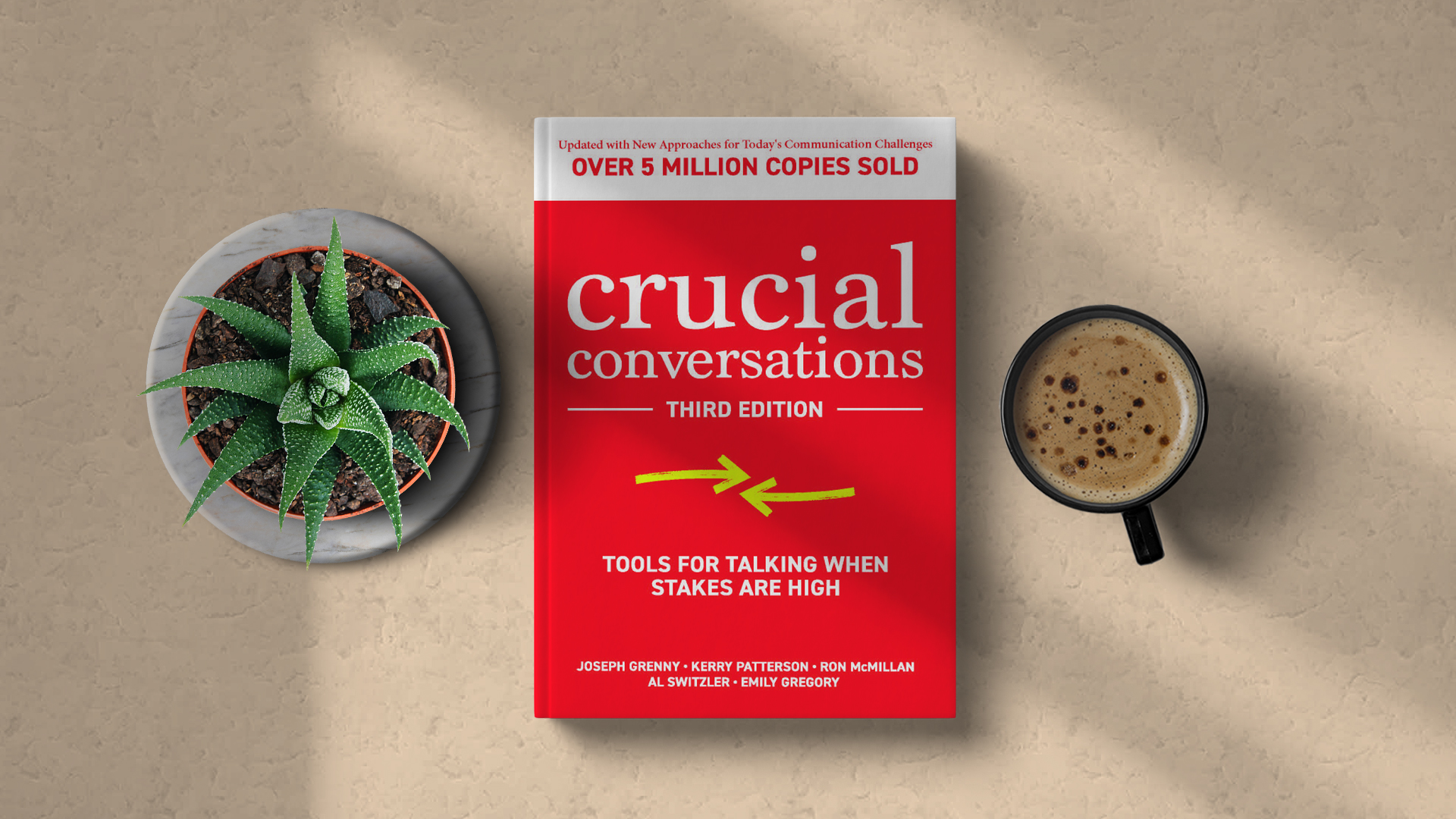 "The single biggest problem in communication is the illusion that it has taken place," George Bernard Shaw reportedly stated.

According to the authors of Crucial Conversations, most human problems stem from how individuals react when others disagree with them on significant and sensitive subjects.

The outcome of these events typically determines the course of your life. That's why having a plan you can count on to provide results in certain situations is so important.

You'll discover the seven principles for having important discussions in this overview. But first, we must define what a critical dialogue is and why it is important.

What's a Crucial Conversation? And Who Cares?

The authors point out that the more important the talk is, the less likely we will handle it successfully.

It's logical. They don't happen frequently enough to become a habit. They are very emotional. Therefore we try to avoid them if possible. As a result, we don't take the time to plan out how to execute them properly.

This, of course, has ramifications in every aspect of our lives. Our ability to manage these talks deftly affects our professions, homes, and even our emotional well-being.

Consider what the writers refer to as "The Fool's Choice," in which we feel that the only option is speaking the truth or maintaining a buddy.

Dialogue and the Shared Pool of Meaning

So there you have it, the terrible news.

The good news is that there is a reliable set of tactics demonstrated to work in practically every circumstance and context. It is based on two people's free flow of open conversation, which the writers refer to as dialogue.

The authors refer to the "Shared Pool of Meaning" as the center of discussion. Suppose you and I begin a conversation with differing perspectives, sentiments, and theories about the subject at hand. In that case, we each have our own "Personal Pool of Meaning."

People who are great at discussion provide a secure environment for everyone to add their meaning to the shared pool. That contains ideas that we may not have explored otherwise. The group's decision is better than any one member's alone.

So, how are we going to get there? With the Crucial Conversations' seven principles.

"How to Stay Focused on What You Really Want" is the subtitle of this chapter.

There are three phases to accomplishing this.

Remember that you are the only person you can directly manage in each conversation as the first step to attaining what you really desire. As a result, you begin this journey by altering your mindset and committing to the 7 principles.

Focus on What You Really Want

The second stage is to maintain your concentration on what you truly desire. In a high-stakes circumstance, it's simple to change your motivations on the fly - perhaps to save face, for example.

Your fight or flight response is also likely to appear in an emotionally intense conversation. Frequently resulting in negative effects. Slow down and pay attention to your reasons if you find this happening.

Examine your actions to see what they reveal about your motivations. Then, determine what you truly desire for

Finally, consider how you would act if you truly desired that outcome.

Then, as you analyze your options, you'll find that you're persuading yourself into making a Fool's Choice.

Your mind will begin to suggest that you must choose between honesty and relationship tranquility. Or the difference between winning and losing.

It all starts with a simple method to get out of the Fool's Choice.

This is easier said than done, but you'll notice that crucial conversations in your life begin to flow much more smoothly if you start there.

Recognizing when you're in a vital discussion is one of the keys to having them. That's because most important talks don't begin that way.

People feel protected and can maintain their composure when interactions are regular. When interactions become emotional, though, that feeling of security vanishes. Most individuals fall back on their "Style Under Stress," which is how they've always dealt with challenging situations (and it is typically ineffective).

Silence (withholding meaning from the pool) or violence (attempting to force meaning into the pool) are common examples.

People frequently use silence for one of three reasons:

When individuals use violence, they generally do one of three things:

People who are good with conversation search for indicators of these issues. These issues can manifest in either themselves or others. They can also do so in both the discussion content and the situation.

This concept explains how to make it safe to talk about anything. Furthermore, you'll know what to do if you or your discussion partner chooses silence or violence as a response.

You can only return to the topic at hand and resume the conversation once safety has been restored.

Decide Which Condition of Safety Is at Risk

To do so, you must first determine whether the condition of safety is jeopardized: shared purpose or mutual respect.

When others in the conversation don't believe you care about their goals or don't trust your motives, there is a breakdown in mutual purpose.

Staying in a critical dialogue requires mutual respect. Other individuals will leave you as soon as they sense you don't appreciate them.

So, when anything goes wrong, the first thing to do is figure out what's wrong.

Then you may use the following three abilities to bring everything back on track.

First and foremost, apologize if you've made a mistake that has caused others to suffer. Keep an eye on whether this has helped restore the conversation's safety.

Second, you may re-establish safety by employing the skill of contrasting when you believe the other person has misread your goal or meaning. It consists of a don't/do statement that addresses the portion where they think you don't respect them (the don't part) and the part where you confirm your regard for them (the do part).

"The last thing I wanted to do was signal that I don't appreciate the job you've been doing," you may remark.

Third, you may take a step back and use a four-step method to develop (or recreate) a shared purpose:

When experiencing powerful emotions like wrath or fear, this idea explains how to stay in dialogue.

The first step in gaining control of your emotions is to recognize that they are not something that happens to you; rather, they are something that you make. And, in many situations, they are motivated by the desire to provide your own interpretation of events that may or may not be accurate.

You see and hear something (someone significant doesn't respond to your email), you create a narrative about it (they must no longer like me), you feel an emotion (hurt or concern), and then you act on those feelings through silence or violence.

Once you've acknowledged that you've generated your emotion, you have two options: acting on them or controlling them. Those who are skilled in conversation choose to handle them. Here are some strategies for accomplishing just that.

Slowing down and analyzing your tale is the first technique.

Examine what you believe is causing you to feel this way. Then consider if you have any actual evidence to support your judgment - you probably don't.

Consider different explanations for what happened next. There are generally several reasons why something happened or didn't happen. It's up to you to know that your tale is merely one of many possibilities.

Tell the Rest of the Story

After that, you'll decide whether or not to share a valuable narrative. A good story elicits emotions that lead to positive behavior, such as conversation.

First, consider your part in whatever has occurred or has not occurred. You may make a difference by recognizing your position in the circumstance.

After that, consider why the other person acted the way they did. If you start with the idea that they are sensible, rational, and good, you'll be able to come up with some alternate answers fast.

Finally, think about what you really want to get out of the circumstance, and then figure out what someone who sought that result would do.

As a consequence, you'll have constructed a buffer between the bad feelings you're experiencing and your reaction.

It's easy to let your emotions get the best of you while you're in the thick of a vital conversation. This might lead to you speaking abrasively without you even realizing it.

To avoid this, remember to STATE your way by sharing, telling, asking, talking, and encouraging.

Share your information. Because you can't argue with facts, they are the least contentious and most compelling aspects of any argument you're trying to make.

This is where you tell your tale. Then you'll start telling the other individual what you've come to as a result of the facts. Just keep an eye out for signals that your safety is being jeopardized while you're doing so. If that's the case, use the contrasting method to get it back on track.

Inquire about the paths taken by others. After that, encourage the other individual to express their perspective on the situation.

Talk cautiously. When you're delivering your tale about the facts, be careful to emphasize that you're telling a story, not presenting information as fact. Use kind words, but not to the point of becoming "wimpy," as the writers suggest.

Encourage others to try new things. Finally, create a safe environment for the other individual to express an opposing viewpoint. Make it apparent that you are eager to hear the different views if one exists.

This principle is concerned with your capacity to make the other person feel comfortable by assisting them in sharing facts, stories, and feelings.

Your purpose is to assist the other person in letting go of their "silence" and "violence" behaviors.

Four effective listening skills can assist you in returning to a secure location.

When You Are Responding

Remember your ABCs when it's your turn to react again.

The goal of all important dialogues is to get people to take action. Even when fantastic talks occur, taking action isn't always a given.

Uncertain expectations about how choices will be made and inadequate follow-through on judgments made are two reasons why talks do not lead to action.

Here are some ideas for dealing with both of those possible stumbling obstacles.

Decide How to Decide

There are four methods for making decisions, and you must choose the one that best matches your present scenario and make it clear how the decision will be made.

There are four things to ask oneself while determining which strategy to use:

Finally, to get the ball past the finish line, think about who has to act on the choice, exactly what they need to do, and when they need to do it, as well as a game plan to follow up.

We've covered a lot of territories so far, and the best approach to get started on having important discussions in your life is to, well, get started.

Keep this summary handy and refer to it frequently as you continue on your trip.