Book Summary: Do The Work 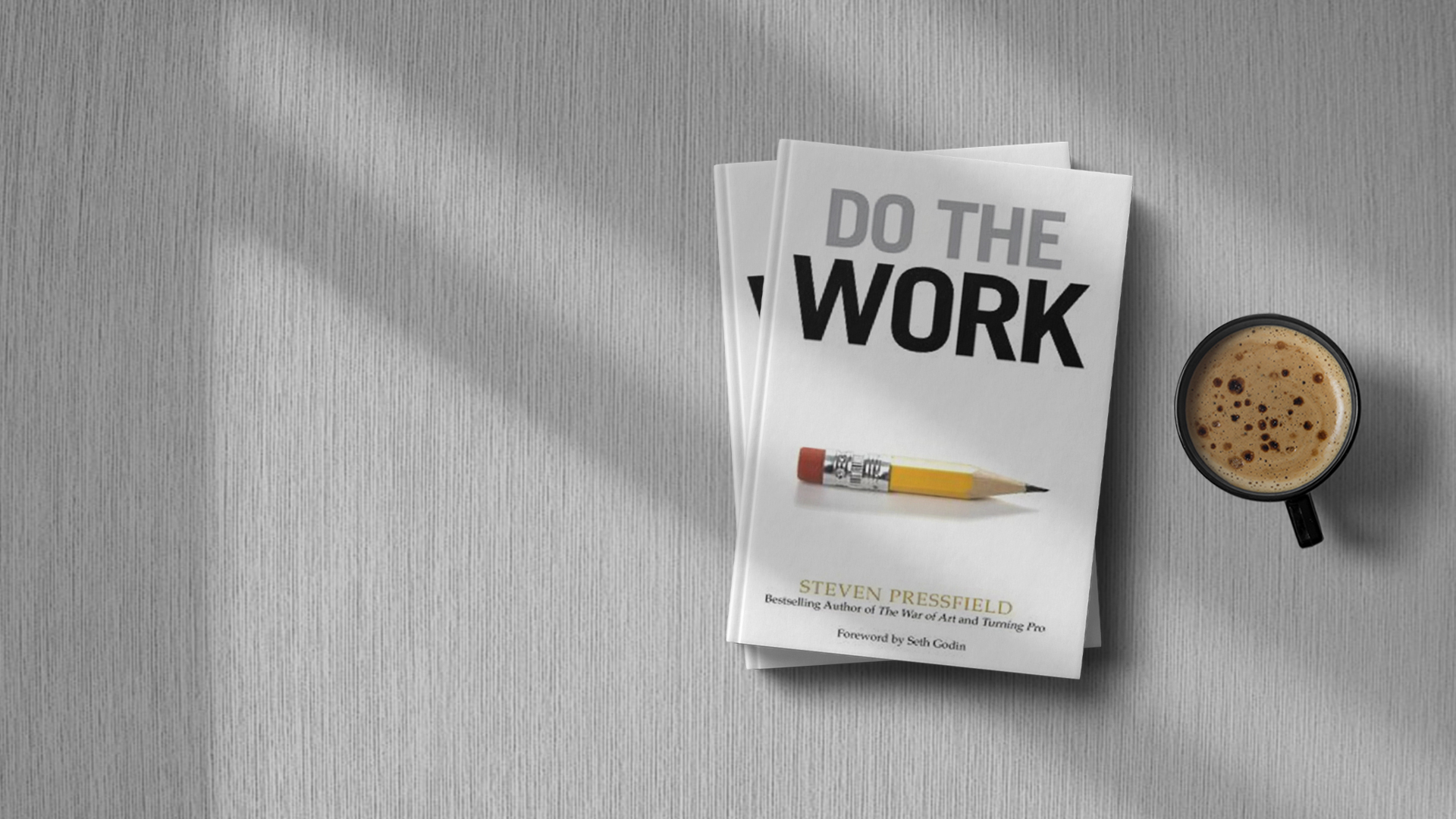 Have you ever paid attention to the voice in your brain while doing your work? Have you ever heard it say, "There's always tomorrow"? Have you ever been told, "You aren't good enough"? Or it might be warning you that "Your plans are insane."

When you want to shove your head into the mouth of a live alligator, that tiny voice in your brain may be a good thing and keep you out of danger.

However, as Steven Pressfield points out in his book Do The Work, this voice isn't always looking out for your best interests. It urges you to play it safe and abandon your ambitions for greatness in the process.

Finally, the reality of achieving greatness is that you must persevere and work hard to reach no matter what goals or ambitions you have. It won't be nice, but it'll be the only way to achieve big things.

Here's how to get started with, and finish a fantastic job.

Pressfield has worked as an author for years and learned a thing or two about persevering in the face of adversity.

Writing, like any worthwhile endeavor, has been idealized in several films and essays. Society has led us to believe that if we simply look hard enough, we can find a life free of anxiety, stress, and other similar ills. That, however, is not the case.

In reality, it's the polar opposite. As Pressfield has discovered, if you are up to anything worthwhile in life, you will encounter resistance — and resistance has some principles:

There is an enemy, and that is the resistance. The first step in combating resistance is to recognize its presence.

The enemy is unyielding. It is cunning and vicious, and its goal is to kill you rather than hurt or slow you down.

The enemy is within you. This indicates you can't get away from it. There is no safe haven from the resistance anywhere in the cosmos.

You are not the enemy. The enemy may be inside you, but it's not you. This means you aren't to blame for the voices in your brain. Nobody is holding you accountable for your faults, and you aren't a horrible person. You are hearing exactly what everyone else on the globe is hearing.

The "true you" must face off against the "resistance you." There is no getting around that. You can't ignore it or run away from it. You must fight the resistance.

Then there's resistance. The first thing that drives and frightens you is a concept or goal. What comes first is your enthusiasm and love for what you do.

Assistance is the polar opposite of resistance. There are forces in the cosmos working in your favor.

The most important of these is your unwavering devotion to completing your ambition, project, or life's work. You may now proceed to the phases of working your way through the project if you are completely committed to it.

Begin before you are fully prepared. That is some of the most insightful wisdom I've ever gotten. Why? Because the moment you come up with an idea, the resistance shows its face.

As Pressfield points out, the enemy isn't a lack of preparedness, a depleted cash account, or insufficient time. It's the resistance.

How many days have you begun the day behind the eight ball because you hit the snooze button a few times too often? If you're anything like me, you know that 28 minutes of light and disturbed sleep won't make you feel any better, yet we do it nonetheless.

To start, go on a research and planning diet.

Later on, the information can be filled up and modified. For the time being, the most important thing is to put your concept into action.

In the book, Pressfield recounts having lunch with his guru in Manhattan. He turned to Pressfield as he scribbled some notes on a pad of paper. And he said, "Steve, God made a single of yellow foolscap precisely the correct length to hold the outline of an entire novel."

If you can fit the outline of a novel on one page of the paper, your concept or business plan should be able to do the same.

Second, keep your thoughts as simple as possible.

The creative process is primal, like giving birth to a child. The baby is always delivered amid anguish, turmoil, and blood, no matter how clean the delivery is. Your brilliant suggestion will be implemented as well.

Third, your concept should swing for the seats (like Babe Ruth did every time he stepped up to the bat). This isn't baseball, though, and you can't strike out at this stage.

You may always tone down the absurdity of your concept afterward. For the time being, be loyal to your desire to alter the world and create something that will outlast you.

Fourth, begin by focusing on the final state. Every great artist or author starts with a clear vision of how their work will be received. From there, you'll be able to figure out what actions you need to do to get there.

That's all there is to it. Four steps to get you started on the path to greatness.

Now that we have the basic screenplay for our plan to transform the world, we can begin delving into the specifics and bringing it to fruition.

We'll begin by "covering the canvas," as Pressfield puts it. This indicates you should get to the "end" as soon as feasible. It's time to start writing your first draft. That seems very obvious if it's fiction.

The second thing you must do at this point is to put all self-judgment aside. You have plenty of space for mistakes unless you're constructing something where people's lives depend on you being 100 percent correct all of the time.

There's no need to listen to the voices in your brain right now because no one is going to criticize your first draft.

Third, utilize the act + reflect method. Ideas arrive when and where they want. In reality, creating a first draft or a prototype will drive you to your next concept.

As you go through these ideas, make sure you're flexible enough to include new ones and that you're keeping an open mind about them.

It's crucial to remember that you should never try to act and think at the same time. The reflecting stage is when you start to listen to the voices in your brain, and this is when most people get into problems. It's like committing creative suicide if you do this while creating your concept.

Fourth, understand that you will face the "big collapse" at some time during this middle period, just as you believe you are making tremendous progress and are almost done.

The worst aspect about the disaster, according to Pressfield, is that we can't plan for or avoid it. It will happen naturally, and it is generally the result of anything we did incorrectly in the early phase of the project.

We have two options at this point:

The only difference is that this time it's an issue with our goals and dreams, the things in which we've put so much time and effort. The only option for those who are genuinely devoted is to take on the problem and work it out.

This is what best-selling author and marketing expert Seth Godin refers to as "shipping." Why is he making such a fuss over it?

Because, at the end of the day, if you don't ship anything, every ounce of effort, time, and money you put into your project will be a complete waste of those resources.

It takes a lot of guts to ship. Some may even argue it requires steel balls, as Alec Baldwin wore in Glengarry Glen Ross.

Why is shipping so difficult? On a logical level, this is absurd. The final yard should not be any more difficult than the preceding 99.

However, this is where the resistance is fiercest and where it is making its goal-line stand. It's ironic because It's our fear of success that's keeping us from moving forward.

Marianne Williamson, a best-selling writer, is quoted in the book by Pressfield. This remark has appeared in many books and films, yet I never get tired of hearing it. As you make your final push to finish your job, have this handy:

"We ask ourselves, Who am I to be brilliant, gorgeous, talented, fabulous? Actually, who are you not to be? You are a child of God. Your playing small does not serve the world. There's nothing enlightened about shrinking so that other people won't feel insecure around you.

"We are all meant to shine, as children do. We were born to manifest the glory of God that is within us. It's not just in some of us; it's in everyone. And as we let our own light shine, we unconsciously give other people permission to do the same. As we're liberated from our own fear, our presence automatically liberates others."

When we're down to the wire, we'll have to pull out all the stops. Michael Crichton is reported to have gotten into the habit of waking up earlier and earlier each day as he neared the completion of work. He'd ultimately have to leave the house and hire a hotel room to keep from driving his wife mad.

Perhaps shutting your email program and putting your phone on vibrate for a few hours is the final push you need. Maybe renting a log cottage in the woods is the answer. Putting on your headphones and listening to classical music might be the answer.

Perhaps it's rereading Marianne Williamson's statement repetitively. Find out what it takes to slay your monster and ship your completed project, whatever it is.

The promise is enormous: once you've worked out how to slaughter your dragon and ship, you'll know how to accomplish it without fail time and time again.

Yes, you'll still have to fight the resistance every day; that isn't going to change. However, you'll have the key to triumph in your pocket, and the only thing standing in your way of outstanding work will be your failure to use it.

Now the only thing left to do is start a new project. Do it right now. Right now, before the opposition raises a million reasons not to.