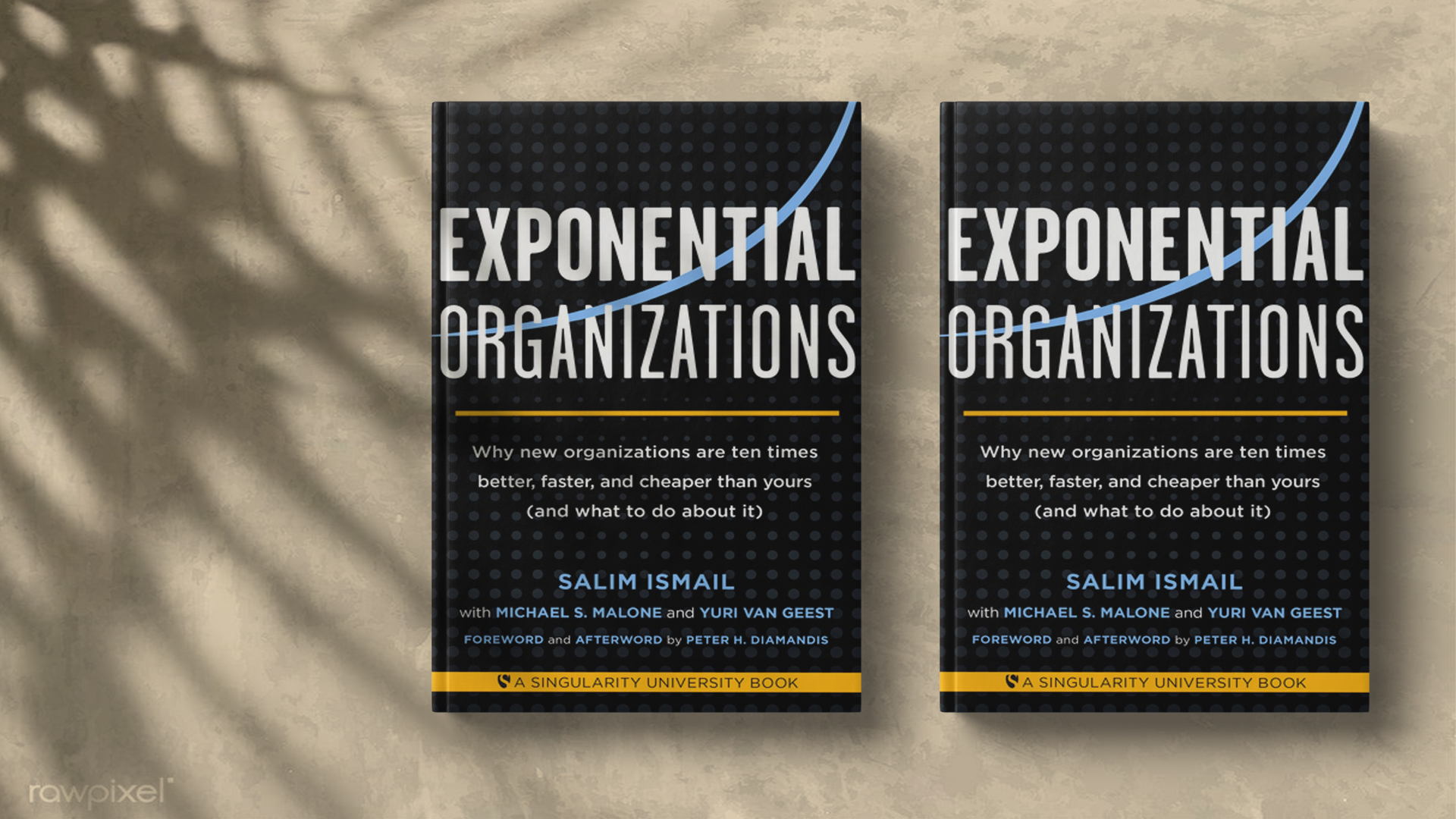 The book Exponential Organizations was written by Salim Ismail to teach us about firms that have a 10x greater effect than their counterparts and how they think differently than most others.

Angel investor David S. Rose remarked, "Any company designed for success in the 20th century is doomed to failure in the 21st."

This is your plan for preparing your company for the future...

Understanding Moore's Law and Its Corollary

What is Moore's Law, and what does it mean?

Moore's Law claims that the performance of computing doubles every eighteen months on average. For the past six decades, this has been the case.

Ray Kurzweil, a best-selling writer, innovator, and visionary, discovered an important corollary to this Law: the doubling trend applies to any information technology. When you go to an information-based environment, the rate of development accelerates exponentially, similar to Moore's Law.

The problem in the corporate world is that most experts predict linear growth in periods of exponential change. This becomes an issue in a world where everything, including your industry, is information-enabled.

However, the good news is that information-enabled settings provide fundamentally disruptive possibilities.

This shift is being fueled by two major factors:

So, what do we do about the change?

Have a Massive Transformative Purpose

The existence of a Massive Transformative Purpose (MTP), also known as the organization's aspirational purpose, was a consistent finding in each of the Exponential Organizations.

The most crucial thing to remember is that your MTP should be something that generates "The Power of Pull," as defined by organizational researcher John Seely Brown.

The Power of Pull is the capacity to build a movement through your work.

There are five external features of an Exponential Organization, which, when combined, form the acronym "SCALE."

Freelancers and contractors used to be difficult to discover and manage. Still, now that the cost of locating and tracking them is near free, there is no reason not to engage them.

Using a mix of "on-demand" platforms like oDesk, Elance, TaskRabbit, or any other available today, you can get nearly anything done in your organization. In 2020, there were five billion individuals online, ready to work from their cell phones, tablets, or Internet cafés whenever and only if they are needed.

"If you build communities and do things in public, you don't have to find the right people; they find you," Chris Anderson says. He is the former editor of Wired Magazine and now the head of DIY Drones (a community with 55,000 members).

There are three phases to creating a community around an Exponential Organization, according to the writers of this book:

Employees, customers, vendors, partners, users, and fans are among the individuals you will attract. Everyone else is the folks in the crowd if these are the people in your town. Getting people to work for you is one of the most apparent uses for the public.

"The smartest people in the world don't work for you," as Silicon Valley visionary Bill Joy famously quipped. As a result of the diversity and volume of the flexible workforce, the business will become more agile and better at learning and unlearning.

Machine learning may appear frightening, yet it is the way of the future in business.

In 2002, Google's income was less than half a billion dollars. They were producing that much every three days in 2012. The PageRank algorithm, which ranks the popularity of online sites, was at its heart.

The next wave of growth is being driven by two sorts of algorithms:

Deep Learning algorithms could also play video games by first determining the game's rules and then improving performance. The disruption of white-collar occupations, which will eventually be replaced by robots, is on the way.

Do you have any doubts?

According to a study on recruiting techniques undertaken by the American Psychological Association, a simple algorithm outperformed intuitive hiring practices by more than 25% in terms of successful recruits.

The key concept is to keep what is absolutely necessary for your business and outsource the rest.

Amazon Web Services is one of the most well-known instances. It allows businesses to lease on-demand computing on a variable-cost system. This drastically altered the technological environment in previously inconceivable ways.

Currently, rivals to your business are sprouting up that would have required hundreds of thousands of dollars simply to get started. They may now simply get started for a few bucks on a credit card.

Uber is the most well-known example, as it does not own any of the mission-critical assets it uses. The drivers own all of the vehicles that transport millions of passengers across the world.

Except when it comes to finite resources or goods, non-ownership is the key to owning the future. Ownership is a preferable alternative when the asset in question is uncommon or highly limited. If your asset is data-driven or commoditized, however, accessing it is preferable to owning it.

Sweepstakes and airline miles are examples of user engagement tactics that have been around for a long time. The power of involvement is being increased now that these tactics have been information-enabled and shared.

Any engagement program should include the following characteristics:

These programs can be utilized to interact with all of your stakeholders, including employees, the community, and the crowd.

There are five internal elements of an Exponential Organization, which, when combined, form the acronym IDEAS.

Uber, for example, manages its army of drivers using interfaces and automated procedures. Its algorithm, above all, matches the best/closest driver to a user's location to provide the greatest possible customer experience.

Interfaces are best thought of as aids in the management of plenty. When you're in charge of tens of thousands (or perhaps millions) of external partners, you need a system in place to keep everything in order.

The Exponential Organization cannot scale without these interactions.

You'll need a new strategy to measure and manage the company now that there's so much data accessible. This would be best done with a real-time, flexible dashboard that included all critical corporate and personal KPIs and was available to everyone in the organization.

According to scientific research in neuroscience, gamification, and behavioral economics, specificity and frequent feedback are important in generating behavioral change and impacting.

As a result, real-time tracking of your company's important growth drivers is crucial to its success. Because of the short feedback loops, you may reduce your susceptibility to mistake.

Sears, Kmart, and Walmart are excellent examples of how reducing feedback loops may benefit your company.

In the early 1990s, Sears and Kmart would batch all point-of-sale transactions daily, and the results would take several weeks to reach the main office.

On the other hand, Walmart developed a real-time inventory system that provided this data considerably more quickly. Sears and Kmart were eventually destroyed by Walmart, and they never completely recovered.

All business designs, as John Seely Brown points out, are designed to endure risk and change. All corporate planning initiatives aim to increase efficiency and predictability, implying they try to maintain a constant state.

You must fail quickly and frequently while minimizing waste to generate ideas that can assist define your company's future.

In a nutshell, you undertake research on your clients' demands before conducting an experiment to discover if a suggested product fits their needs.

According to best-selling author Eric Ries, "The modern rule of competition is whoever learns fastest, wins."

Adobe, for example, employs the 5x5x5x5 strategy of business innovation:

Five corporate teams, each with five complementary team members, compete for five weeks (one or two days each week) to generate one innovation while spending no more than $5,000.

Following that, each team presents their product and findings, with the most promising proposals progressing to the next financing round.

Allow your workers to perform their finest work. Autonomous teams are self-organizing, multidisciplinary, and have decentralized power.

Valve Software is an excellent example of "autonomous teams," with 330 employees but no traditional management structure, reporting lines, job descriptions, or regular meetings.

Instead, the organization recruits brilliant, self-motivated individuals who choose the projects they want to work on. They are also encouraged to begin new initiatives as long as they are compatible with its MTP.

Holacracy, a method of governance arrangement in which power and decision-making are spread among self-organizing teams rather than being vested at the top of a hierarchy, is a developing trend in Autonomy.

Zappos.com, an online shop specializing in shoes and clothes with 4,000 workers, is a well-known example of this. Everyone in the organization is encouraged to make their own judgments. Always with the best interests of their consumers in mind.

While figuring out how all of these aspects fit into your present and future company plan may seem intimidating, the business advantages you can expect from these elements include quicker dialogues, faster decision cycles, faster learning, and team stability through rapid expansion.

There is a massive shift taking on right now that will affect you and your whole business. It's not a question of "if," but "when," so learn everything you can today about how Exponential Organizations are adapting so you can be on the right side of history.