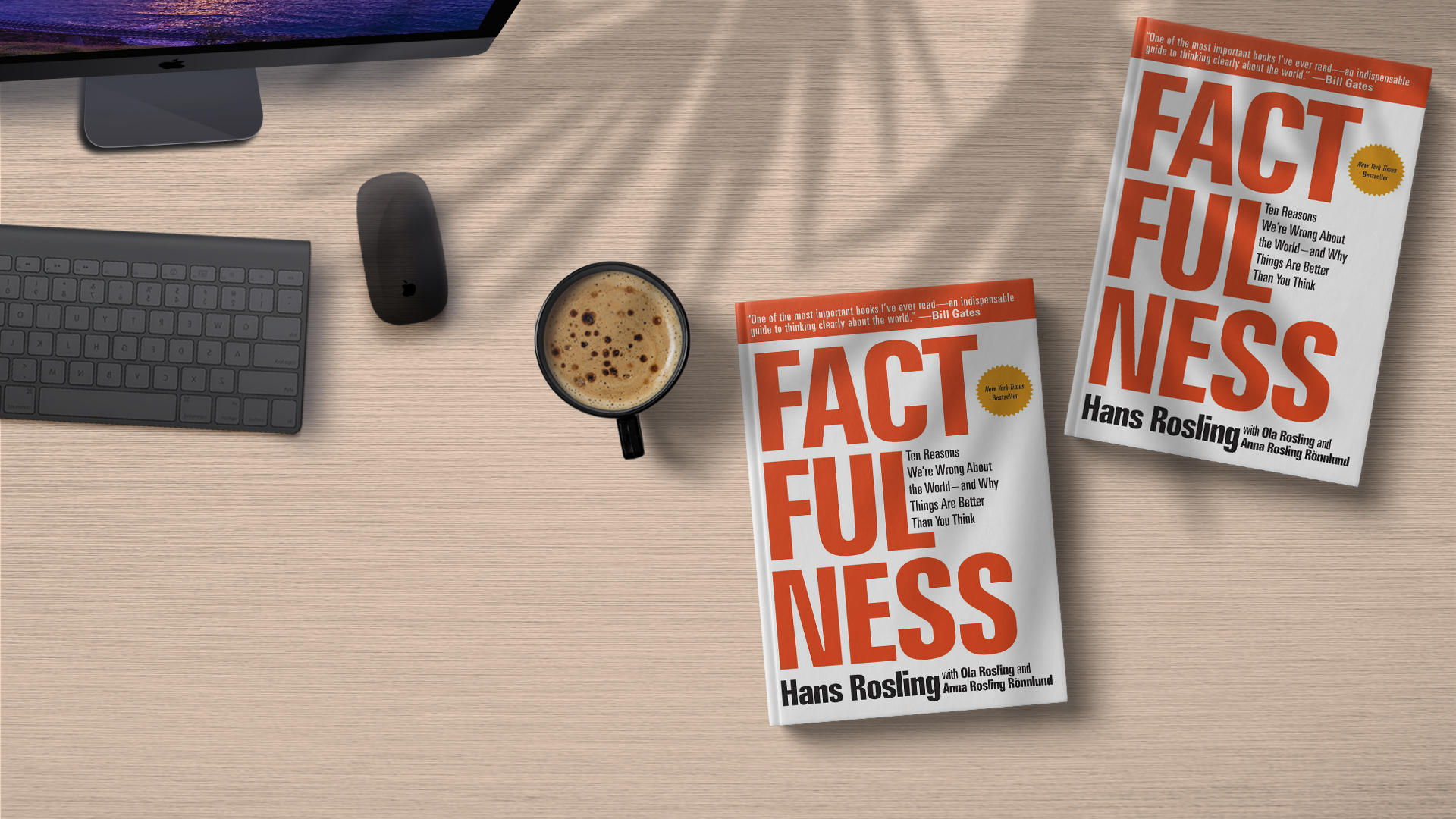 This book provides a fresh perspective on our world and how to comprehend it. Global correlations in poverty, wealth, population increase, births, mortality, education, healthcare, gender, conflict, energy, and the environment are all shown.

Many individuals believe that the world is more terrifying, violent, and dismal than it was in the past.

However, the world is becoming better. Our brains have evolved to desire drama, which leads to misunderstandings and a too dramatic worldview. We should instead build our worldview on facts.

In this overview, you'll learn about 10 human impulses that lead to incorrect thinking and how we may learn to distinguish between fact and fiction while formulating our beliefs.

We have a tendency to split things into two separate and frequently competing categories, such as good vs. bad or wealthy vs. poor, with an imagined gap in between.

We often use terms like "them" and "we," or "the West" and "the rest." In the 1960s, it may have been simple to categorize countries as "developed" or "developing," but this technique is now obsolete. The world has evolved, but not the viewpoint.

The majority of people nowadays reside in between. There is no distinction between developed and developing nations or between affluent and poor people.

We can't categorize the world into two groups. Instead, we should assign them to four levels, with one being the most impoverished and four being the most developed.

Although our gap instinct is powerful, three typical warning indicators activate it:

We also have a tendency to focus on the negative rather than the positive. The majority of individuals believe that the world is deteriorating. This occurs for three reasons:

People are typically hesitant to claim that the world is improving since awful things continue to occur.

The answer to the negative bias is to simultaneously believe two truths: the world can improve while still having issues.

Things can go in both directions. Another thing that helps is expecting negative news all of the time. Drama is used by the media and campaigners to get your attention.

Keep in mind that dramatic stories are more likely to be reported. Finally, don't look back on time with rose-colored spectacles on. Although the evidence of the past is painful, we cannot disregard the truth.

In actuality, things usually improve gradually, making it less apparent and notable. It's not always easy to hear about the advancements.

A common misunderstanding is that a line will always continue in a straight, linear path. In reality, a broad trend is influenced by a variety of elements.

For example, you can't assume that a newborn that grows seven inches in the first six months of life will keep growing that much every 6 months for the remainder of their life. Trends do not always follow a straight line.

Remember that curves exist in different shapes and sizes to help you regulate your straight line impulse.

Keep in mind that straight lines are far less common than we would believe. Any two linked locations appear to form a straight line, but correct conclusions can be drawn when a third point is added.

We can't see properly while we're scared. We have a propensity to create worst-case scenarios. When we are afraid, it isn't easy to think critically.

For evolutionary causes, our anxieties are encoded into our brains. Physical pain, imprisonment, and poison were previously used to help our ancestors survive, so our fear reflex is triggered when we see these risks. As a result, we tend to exaggerate the dangers.

The media is well aware of this and exploits it to get our attention. Even though the news frequently emphasizes the risks in our world, the truth is that it has never been less violent or safer.

Natural disasters still happen; however, since people can now afford to be prepared, they destroy many fewer people. Plane disasters, murders, nuclear spills, and terrorism account for fewer than 1% of deaths each year.

In 2016, 40 million commercial passenger flights arrived safely. Only 10 of them resulted in fatalities. But only 0.000025% of the total were covered by media.

Remember that anything you hear has been chosen exactly because it is frightening. When you're afraid of anything, consider how hazardous it is and how much you're exposed to it.

We have a tendency to exaggerate things. We inflate the significance of a single visible event or person, and we magnify the extent of an issue based on a single figure.

For example, when we witness physicians and hospitals save children's lives, it's simple to think they do so.

However, research reveals that virtually all gains in child survival rates are accomplished outside of hospitals through preventative efforts. Because fewer children become unwell in the first place, more children are now surviving.

The media, like most instincts, takes use of the size instinct. They exaggerate the importance of every particular event, information, or quantity.

You must compare if you want to manage your size instinct. Never imagine that a single number can be important on its own.

To keep everything in proportion, apply the 80/20 rule. The division is another method for regulating size instinct. We may often make a huge number more understandable by dividing it by a total, such as the entire population.

People are prone to categorizing and generalizing; it happens unintentionally. To organize our ideas, we require categories. This important and beneficial instinct has the potential to change our perspective on the world:

Traveling is the greatest method to overcome this tendency. If you have the opportunity, go to new nations and visit authentic residences.

Make sure to challenge your categories. Seek for differences and similarities within and across groups.

Be wary of the phrase "majority." The majority only refers to more than half of the population, which might be as low as 51%.

Exceptional instances should be avoided at all costs. Don't allow a single conclusion to be used to generalize a whole group. Keep an open mind about the likelihood that your experience isn't "typical." Be cautious in extrapolating from one group to another.

The destiny instinct is the belief that people's, countries', religions', or civilizations' fates are determined by their intrinsic qualities. It's the belief that things are the way they are for unavoidable reasons and will never change.

It leads us to assume that any gaps that exist are permanent and irreversible. Recognize that since change happens slowly, many things appear to remain unchanging. That isn't to say that change isn't taking place.

From an evolutionary viewpoint, the destiny instinct makes sense. Humans have always lived in rather stable environments.

Claiming a certain destiny for a group can also aid in unifying that group behind an ostensibly eternal goal. Societies, nations, religions, and civilizations, on the other hand, are not rocks. They change as they move, grow, and change.

Societies and civilizations are always changing, but we frequently don't notice since it happens so slowly. Slow change is not the same as no change. Keep track of your progress throughout time.

Over time, even a one percent yearly change adds up. Keep an open mind to new information and be willing to keep your knowledge up to date.

Try comparing your personal values to those of your parents or grandparents if you're inclined to declare that matters don't change. You are almost guaranteed to notice a radical change.

We have a tendency to focus on single reasons or solutions since they are easier to comprehend and make our issues appear to be simpler to address. However, this leads to a worldview that is misunderstood.

Instead, acknowledge that a single point of view might limit your creativity. And remember that looking at a topic from several perspectives will give you a more accurate grasp of it.

Always look for flaws in your ideas. Keep an open mind to new knowledge that doesn't seem to match.

Rather than simply talking to individuals who agree with you, seek out people with opposing viewpoints and utilize them as a valuable resource for learning about the world. Always keep in mind that specialists are simply experts in their specialty. A trustworthy doctor may not be well-versed in global poverty issues.

Look past the numbers. Data has limitations. Look for real-life confirmation of concepts whenever feasible. Simple ideas and solutions should always be avoided. Our challenges – and solutions – reflect the complexity of the world.

The impulse to discover a clear, straightforward cause for why something unpleasant has happened is known as the blame instinct. It's normal for us to assume that it's due to some nasty person with ill intentions when anything goes wrong.

Things happen because someone wants them to, we like to believe. Otherwise, the universe appears to be unexpected, perplexing, and terrifying.

The blame instinct causes us to overestimate the importance of people or groups. Because we stop seeking explanations elsewhere, this urge takes our concentration and hinders our learning.

Usually, it's more intricate than just one person making a mistake. It's nearly always about a system of interconnected causes. When things go wrong, we should look at systems rather than searching for someone to blame. Don't look for a scapegoat. Instead of looking for villains, look for reasons.

In the face of perceived impending danger, our urgency instinct drives us to take rapid action. This inclination:

One of the most damaging distorters of our perspective is urgency, which adds to high stress and anxiety levels. A global pandemic, financial collapse, world war, climate change, and extreme poverty are five global hazards worth being concerned about. These are issues that we should all work together to solve.

Take modest measures to control the temptation to rush. Request more time and information. Be cautious of future forecasts and extreme acts.

Hopefully, now that you're aware of how tough it may be to get the facts straight, you'll be able to spot the truth.

You'll be interested in new knowledge and willing to change your mind if new facts are discovered. For nearly every subject, accurate data is now readily available.

You can see that the world is not as awful as it appears now that you have a fact-based worldview, and you can understand what we need to do to keep improving it.