Book Summary: Getting to Yes 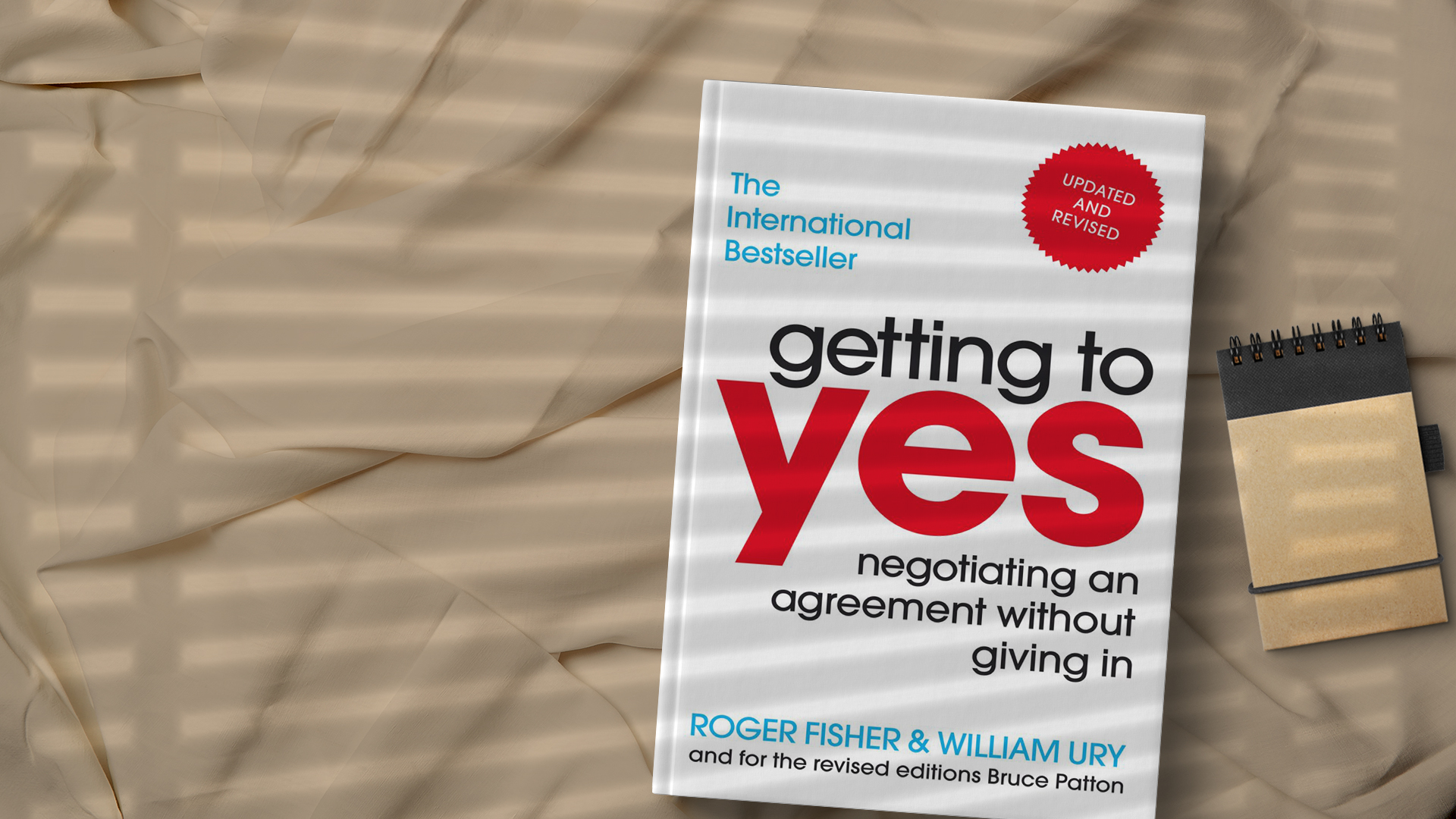 You're a negotiator, whether you like it or not. Day after day, you and everyone you know engage in negotiations.

You may be concluding a transaction with a new customer, dealing with a legal issue, or attempting to convince your children to tidy up after supper.

The book Getting to Yes can help you improve your negotiating skills no matter what you're doing. The Harvard Negotiation Project developed it, and it's termed principled negotiation.

The Problem - Negotiations Over Positions

Let's start by defining what constitutes an effective negotiating strategy. Three criteria are given by the authors:

When many of us negotiate by disputing over viewpoints, we end up with less-than-ideal outcomes. When it comes to negotiating, most of us will adopt one of two ways.

If you have to choose between these two techniques in a negotiation (which you don't, as we'll see in a moment), the hard approach typically wins out. Hard negotiators make soft negotiators vulnerable, and soft negotiators almost always lose.

Let's look at why both tactics should be avoided under all circumstances. We will save you from going down that path.

There is, however, a better technique, which is known as principled negotiation. It's a method that's both harsh and gentle at the same time. The qualities are intense, but the people are soft.

There are four fundamental ideas:

Just one brief note about negotiation timing before we go into the four aspects. These factors are important in all three levels of the negotiation process: analysis, planning, and dialogue. We usually see negotiation across the board from the other person, but that is only the first stage.

Separate the People from the Problem

First and foremost, keep in mind that the person on the other side of the table is also real. They have families, feelings, history, and points of view. They, too, are unpredictable and have prejudices and shortcomings, just like you.

When you join a negotiation, you and your opponent have two types of interests: content and connection. That's because most discussions take place with someone with whom you have a working relationship and with whom you will need to collaborate in the future.

This is one of the reasons why positional bargaining is so dangerous: it muddles the relationship with the negotiation's content.

The authors propose that we separate the connection from the content by addressing it head-on.

We must consider three things to achieve this.

As the writers point out, the gap between your perspective of the problem and the other person's view of the problem is the problem. Therefore, to go somewhere in a negotiation, you must put yourself in their place and do your very best to comprehend their thought process on a deep level.

This is one of those things that is simple to say but tough to do. Here are some pointers to help you succeed:

People make judgments based on emotion, not reasoning, as you've probably heard before.

The first stage is to notice your own and others' feelings. Then consider what is causing the emotions.

Run your replies through the lenses of what the authors refer to as "core concerns." They discovered that most feelings in negotiation are motivated by one of five interests:

The next stage is to discuss these feelings. Make it obvious that emotions are a valid component of the bargaining process and that it's fine to discuss them at any moment.

This will come in handy during the discussion when the other side needs to vent. Getting your anger or fury out is sometimes the greatest way to deal with it. If you assist the other side, they will have an uncommon and profound sense of feeling understood.

It's vital, though, that you don't succumb to angry outbursts yourself.

Finally, bear in mind that a symbolic act may go a long way when you're dealing with emotions. A little gift for a grandchild, an expression of sorrow, or even sharing a meal together might help to improve an unpleasant emotional situation without costing much.

Finally, we come to the most important aspect of interacting with others - communication. The oldest adage in communication is, "It's not what you say; it's what they hear."

Despite what you may believe or anticipate, there's virtually nothing to indicate that the opposing side pays attention to every word you say.

They analyze what you said a few seconds ago, preparing what to say next. In the current moment, only the tiniest amount of effort is spent truly comprehending what you're saying.

To say it another way, sometimes what you say isn't fully comprehended or even misunderstood.

The most straightforward approach to overcoming this natural desire is to practice active listening. You repeat the other side's comments in your own words.

Finally, when it's your turn to speak, make sure you're talking about yourself rather than them. It's far more powerful to describe a problem in terms of its effect on you rather than what the other side did or why it occurred.

The authors provide an excellent example in this chapter. Instead of stating, "You broke your promise," say, "I feel disappointed."

Finally, remember that some things are better left unsaid, especially when emotions run high. One ounce of prevention is worth a pound of cure.

It's not just about having a plan. Understanding how to deal with difficulties as they occur is beneficial, but dealing with them before they become an issue is much better.

Developing a working relationship is one of the finest methods to prevent perception, emotion, and communication difficulties from developing in the first place.

It's also easier to be a principled negotiator if you already know and like the person on the other side of the table. It will assist you in unpacking the problem from the relationship, which we've mentioned as one of the most significant problems in negotiations.

Focus on Interests, Not Positions

The main problem in negotiation is not a difference in positions, but a discrepancy in each side's needs, desires, worries, and anxieties.

When you take away the titles, you'll frequently discover that your interests are comparable. It doesn't imply that their hobbies are automatically opposed to ours because their occupations are contradictory.

So, how are you going to do it?

The English language's most striking one-word query is a decent place to start. You may begin to unravel the layers and get down to the core concerns by asking "why?" - maybe to yourself or out loud to the other party.

Simply ask yourself, "Why not?" while listening to their reasoning. Figure out why the other side doesn't agree to your request to see the big picture.

You'll immediately see that each side has a variety of interests, the strongest of which are fundamental human wants: safety, financial well-being, a feeling of belonging, acknowledgment, and authority over one's life.

Talking about your interests

The very next step is to discuss the hobbies you've discovered. When you convey your interests, the chances of them being met improve dramatically.

You'll almost certainly have to assist the opposing side because they aren't a principled negotiator like you.

Four main difficulties stifle the development of a plethora of choices in most deals. Let's look at them one by one and see what solutions they offer.

Nothing is more damaging than the attitude of hanging around to find flaws in the other side's case.

Searching for the single answer

This is a significant change in attitude that will make all the difference. Most individuals' negotiation goal isn't to come up with new choices; it's to narrow the gap between the two sides.

Remember that there is no single best answer. The greatest way to generate an excellent solution is by developing many alternatives.

The assumption of a fixed pie

Most of us think about negotiations as either/or: either I get what I want, or you receive it.

This isn't anything special, other than to point out that it is not helpful.

Let's go through how to clear the road now that we've covered what obstacles get in the way of generating many alternatives.

This is another issue that is simple to say but difficult to execute. But if you can categorize the process of generating possibilities from critiquing or analyzing them, both sides will profit.

Broaden the options on the table rather than look for a single answer.

There are many methods to do this, and they all appear to be brainstorming sessions.

For example, you and your negotiation partner may discuss how a certain expert could come up with several possibilities. How could an educator, a psychotherapist, an attorney, or a doctor come up with innovative solutions if the problem was child custody?

The trick is to go outside of yourself and place yourself in the shoes of a detached observer. More imaginative possibilities are available when there are less highly heated emotions.

Rather than looking for areas where your interests differ, look for places where they are similar.

One strategy is to develop multiple possibilities that are all entirely appropriate to you and then ask them which one they like (not necessarily good). Then take their pick, modify it a little more, and repeat the same process.

This will ultimately lead you along a route that will fulfill both your wants and desires.

Ultimately, suppose you want to get the other party to agree to an agreement. In that case, you have to think really hard about how to start making that choice easier for them.

Before you provide the answer, try to remove as much suffering as possible from the decision-making process.

Making judgments based on objective standards is the best and simplest method to focus on the problems and away from the concerns that lead to failed discussions.

Market price, precedents set in previous instances, what a court would rule on, professional standards, and anything else that permits you to make a judgment call on principle rather than pressure—those are all examples of standards.

Negotiation is not easy since confrontation is something that nearly no one enjoys. You can get whatever you want while maintaining a working relationship with the other side if you use your natural desire to avoid conflict: principled negotiation.

Apply it in all aspects of your life, and you'll find yourself happier and more likely to acquire what you desire. That's something we could all use a bit more of.