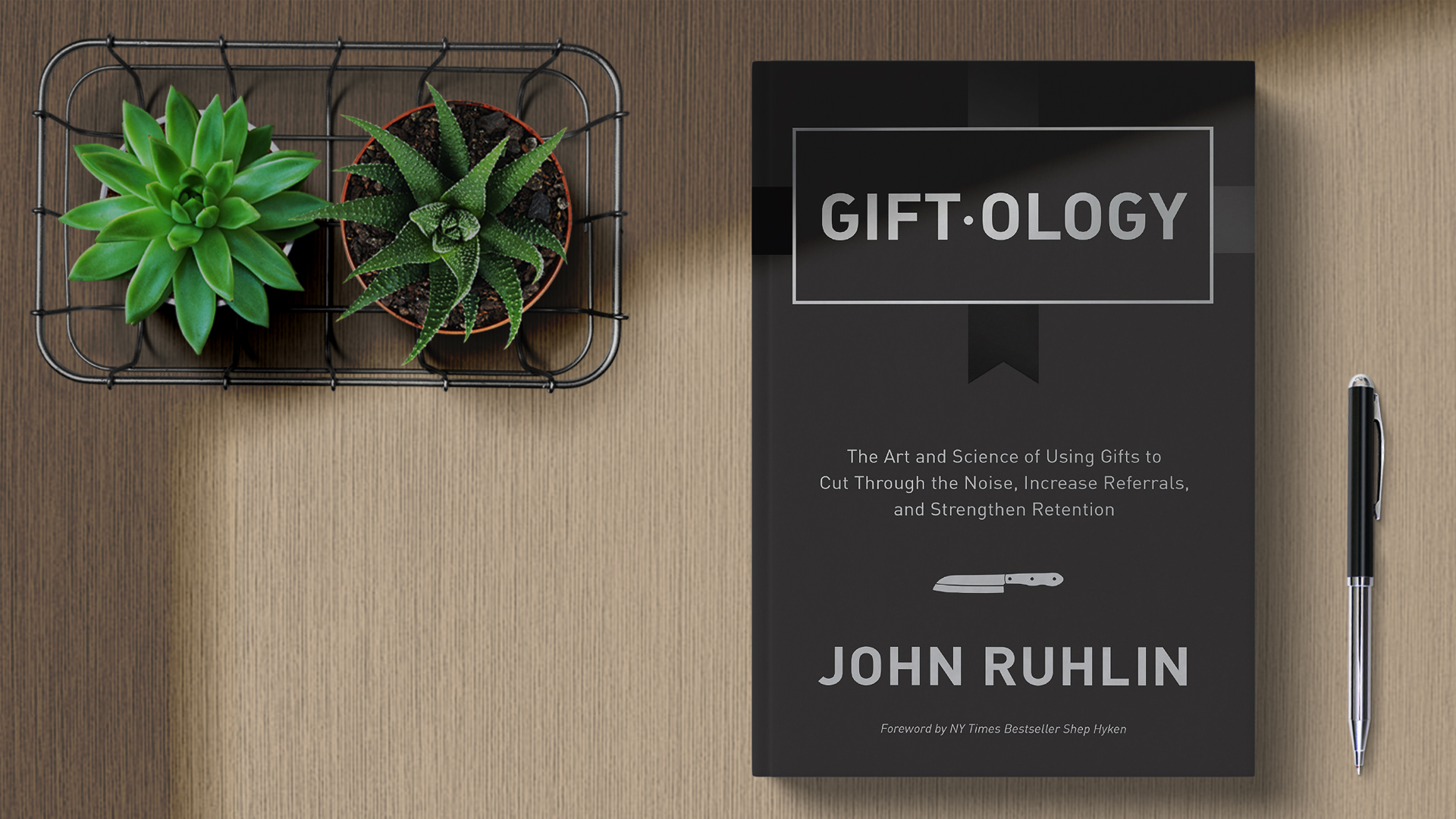 John Ruhlin had no intention of becoming the world's top expert on corporate gifting.

He grew up on a farm in Ohio. On the recommendation of a buddy, he became a Cutco distributor to help pay his way through university.

John began selling the largest transactions in Cutco history out of 1.5 million other representatives and distributors. That's after following the concepts of generosity he learned from "Attorney Paul" (the father of a lady he was seeing at the time). Yes. 1.5 million people.

At the age of 20, he created The Ruhlin Group due to his strategy's success.

He's since built a flourishing company teaching individuals how to present "practical luxury" things as a means to open doors, express appreciation for those around them, and create a fantastic return on investment.

Follow us for the next 10 minutes as we look at what makes a successful giving strategy and how to utilize it to promote your business.

Ruhlin is the type of person who follows his own advice.

Cameron Herold, the former COO of 1-800-Got-Junk?, was the primary driver behind the company's meteoric rise in sales from $2 million to $126 million in only six years—all without spending a single dollar on advertising.

Ruhlin happened to be at a conference where Herold was giving a talk. Ruhlin invited Herold to a Cleveland Cavaliers game, which coincided with a speaking engagement Herold had after spending an hour in line to talk with him. Knowing Herold's preferred clothes store was Brooks Brothers, he also inquired about his shirt size.

Once opening day began, Herold contacted Ruhlin to explain that his travel arrangements had gone awry and that he'd call him after checking into his hotel. Ruhlin hurried off to the next Brooks Brothers shop with a wild idea, fearful that Herold might back out once he arrived in Cleveland.

He told the sales clerk that he wanted everything in Herold's size from the new autumn range. He walked out of the store with $7,000 in his pocket. Then he went over to the Ritz Carlton where Herold was staying and persuaded the management to allow him to turn Herold's room into a Brooks Brothers showroom.

Ruhlin left a note for Herold, saying that he may take any goods he wished.

Fast forward to the current day, and no matter what customer Herold has, he always asks Ruhlin whether he wants an introduction or a gift. Keep in mind that these are billionaire CEOs who are difficult to reach for ordinary people.

According to Ruhlin in the book, this one connection has achieved more for him than $10 million in slick advertising and marketing ever could. Ruhlin considers Herold to be a mentor, champion, and friend. And that wouldn't have occurred if he hadn't been able to conjure up such a bizarre situation.

Yeah, and Herold did pay Ruhlin for all of the clothing he kept, so his extravagant giving approach was a complete waste of money.

This is, of course, an unusual scenario. However, as we will show you in the subsequent sections, you may build an effective gifting plan regardless of your budget.

Giftology is effective for a variety of reasons.

The first and most understandable reason is that giving helps you get rid of clutter.

Important individuals are assaulted with advertisements on social networking sites. And their inboxes are flooded with emails from other less imaginative suitors. Their secretaries are forced to deal with cold calls daily. If you want a chance, you must physically stand out.

Third, gifting satisfies a basic desire we all have to feel significant if done right. When you give someone a customized and meaningful present, they are hard-wired to appreciate it. They're also hard-wired to repay your kindness by offering you something in exchange - in your case, a few minutes of their time.

Fourth, many of the people who receive your gifts will become champions for you.

Ruhlin relates the story of how he sent a one-of-a-kind present to a Cleveland Indians official. The executive wrote a personal introduction and advocacy email to twenty MLB clubs that he had the deepest ties with after becoming a client of The Ruhlin Group.

In five weeks, the Arizona Diamondbacks became a client.

As Ruhlin explains, taking clients out to dinner may cost up to $1,500, and they usually forget about it. But a decade later, when he gives someone a nice, uniquely tailored present worth $200, they still appreciate him.

Simply said, Giftology is the closest thing you'll discover to a magic formula for getting on someone's schedule.

What Not to Give

Before we get into what to give and how to give it, let's spend a few moments talking about what not to do.

First and foremost, do not give out presents with your company's branding on them.

When a present becomes about you, as Ruhlin points out, it ceases to be a gift. You'd never show up to someone's wedding with a Tiffany & Co. crystal vase etched with your name.

So, why would you offer a corporate gift that bears your company's name? If you're going to have something engraved on your present, be sure it's the name of the receiver, not yours.

Second, send presents at a time when everyone else is doing so.

Sending chocolates (no matter how costly or how much you enjoy them) around Christmas and Thanksgiving, for example, is a bad idea. Why? Individuals are already 5 pounds overweight from the other fifty boxes they've gotten.

Let's move on to what we should offer now that we've addressed what not to give.

Ruhlin recommends providing practical luxuries, which are helpful to the present recipient, are finer than what they would buy for themselves, and are happy to use.

There are a few things you may ask yourself to ensure that what you're sending is appropriate.

Is your present the greatest in the class?

When selecting what to give, consider how you might offer the finest gift possible within your economic constraints. A handwritten letter is preferable to a cheap pen or mug bearing your brand.

Is it genuinely one-of-a-kind?

Ideally, you'll offer a gift that is one-of-a-kind and can't be found in stores - especially large box retailers.

People appreciate presents that don't add to their already-overburdened life. You should concentrate on items that they can use and enjoy regularly.

Is it going to be visible?

Your present should be a discussion starter, allowing you to linger on someone's mind for a long time. Preferably, you'll pick something that you'll use every day rather than just a few times a year.

Is it going to last?

Your present should be something that will be useful for a long time.

Is it universally appealing?

You'll be giving a present to numerous people if you use Giftology as a tactic. As a result, look for thoughtful, one-of-a-kind presents that anybody can utilize, aren't gender-specific, and are typically safe choices.

Gifts That Fit the Bill

If you answered yes to all of the above questions, you've discovered a gift on which to base a gifting strategy.

The Ruhlin Group relies on the following elements to do its work:

A Systematic Plan for Gifting

So now we've discussed what to give and what not to give. It certainly is time to bring everything together and make a gifting strategy.

Finally, you want to create a program that will help you grow your business, so you'll need to think carefully about a few things.

The first stage in your gift-giving strategy is to determine whether you can do it on your own.

After that, make a budget. Ruhlin recommends allocating between 2% and 10% of your current net income to the program, with donations ranging from $100 to $1,000. If you're on a budget, try writing a polite message on quality paper rather than sending a $25 trinket or gift.

Finally, select your key stakeholders and start looking for some universal practical luxuries (as described in the previous part) to give them as gifts.

The ultimate outcome is a phenomenon known as "designed randomness." Over a year, you'll know exactly what you'll be giving a customer or prospect. You'll be able to "surprise and please" the receiver since they won't know what's coming next or when.

Here are a few more questions to consider as you construct your strategy.

When do presents make the most difference?

The main idea is that people respond best when you give them gifts at unexpected times. This entails avoiding the holiday season.

On Valentine's Day, Memorial Day, the Fourth of July, and Labor Day—that's when The Ruhlin Group gives presents. They eliminate any attitude of entitlement by doing so because the gift is never expected. It's usually a pleasant surprise, and it leaves a lasting impression.

There are a million and one national holidays to pick from if you want to get even more imaginative. For example, on National Pizza Day, you might send a pizza together with a high-end pizza stone and slicer.

When should you send gifts?

Ruhlin advises giving as often as you can afford, with the proviso that giving on fewer times but with more special presents is preferable. His rule of thumb is to send no more than one gift every other month.

Giving a prospect a succession of presents over time with a similar theme (for example, one knife at a time rather than a complete set at once) makes sense in some cases, which leads us to our final consideration in the plan.

Is it possible to maintain a sense of continuity?

That's what we do with leather items. We might give a bag, then a portfolio, then a notebook, so there's some consistency to what we're sending—not just a bunch of random presents.

One of the most effective sales and marketing tactics you can employ to build your organization is strategic gift sending.

If you like this synopsis, you should purchase the book. Hire the Ruhlin Group if you're serious about developing a plan but don't have the resources to do it yourself.

You'll be able to thank me afterward - in exchange for a good luxury, of course.