Book Summary: How the Mighty Fall 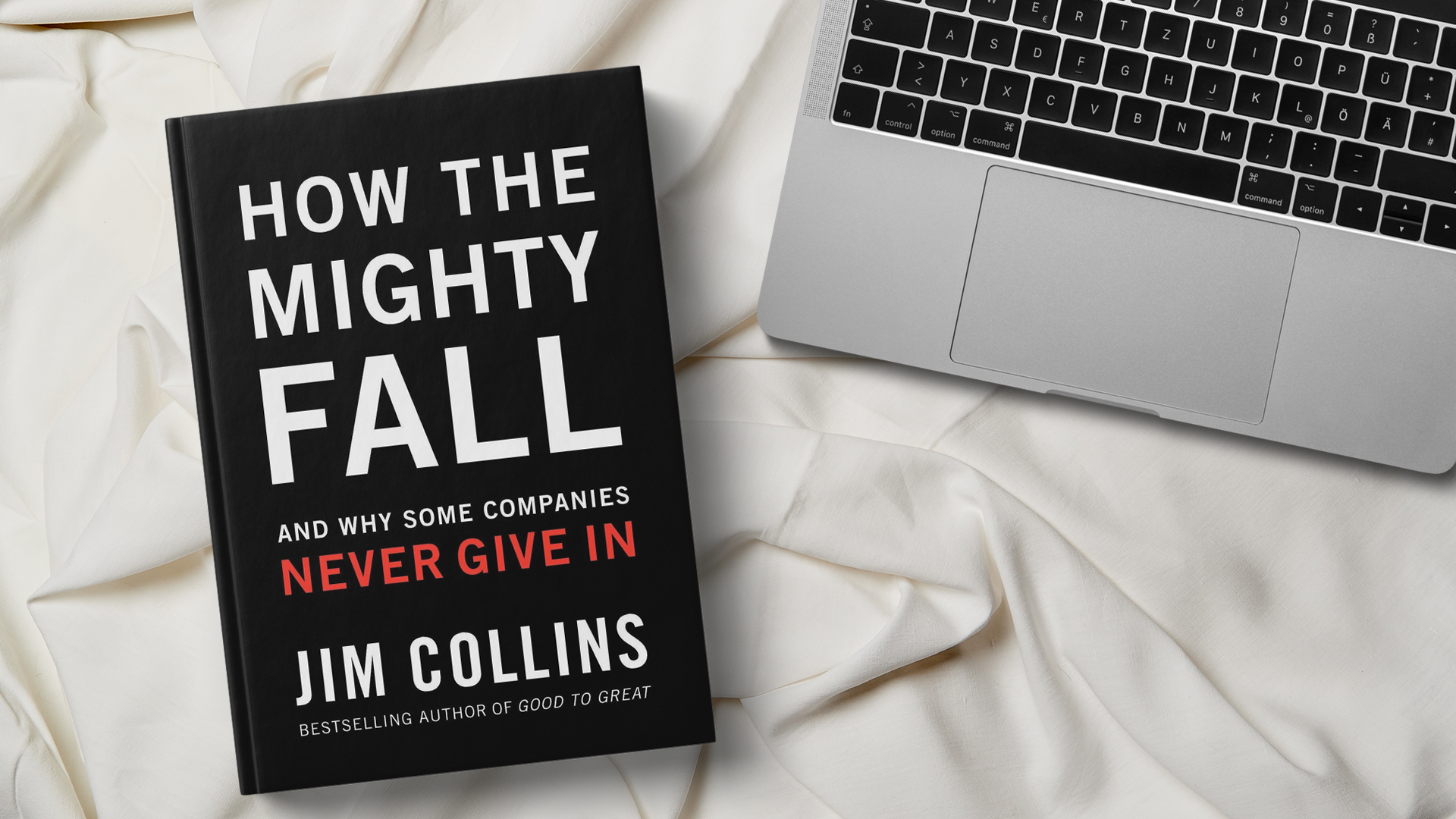 Companies, much like civilizations, flourish and fall. As the global economy collapsed in 2008, Jim Collins penned the foreword to this book while seated on a United aircraft watching the Manhattan skyline.

Bear Stearns went from #158 on the Fortune 500 to gone throughout the weekend. He'd just finished researching how (and why) some of history's greatest firms had failed, including some of the companies featured in Good to Great and Built to Last.

This book examines how the decline occurs in five phases and how we might escape a similar destiny by taking proactive actions to resurrect ourselves.

We'll go through each of the four phases of decline (step 5 is death, so there's no turning back), the markers for each stage because then you can figure out where you are now, and solid suggestions for climbing your way back out.

Let's get this party started.

Success hides many flaws and is frequently the start of a downward spiral. When businesses achieve rapid success, they lose sight of the fundamental reasons for their initial success.

When companies persuade themselves that they are successful because they do certain things and cease looking for new ways to understand and improve their business, they frequently experience a downturn.

That's because luck and chance significantly influence many successful results, which leaders sometimes overlook. Instead, they exaggerate their strengths and fall to arrogance.

The Markers for Stage 1

In the face of overwhelming obstacles, success is considered merited rather than lucky or hard-won. People who believe that no matter what the firm does, they will continue to be successful (or not do).

Neglect of a Primary Flywheel

Companies begin to pay attention to non-essential possibilities and risks due to the neglect of a primary flywheel. This causes people to overlook their major "flywheel," preventing them from approaching it with the same creative zeal that made it outstanding in the first place.

The language of success is preferred to knowledge and insight.

Leaders lose their development orientation, which was why they were successful in the first place. Great leaders and organizations never stop learning.

Discounting the Role of Luck

People often believe that if they had done something differently or worked harder, the outcome would have been different. Great leaders recognize that luck is a component of their success.

The transition from Stage 1 to Stage 2 is essentially invisible. At this point, leaders begin to do more and more of the things that they incorrectly credit to their success. They do so to achieve scale, growth, accolades, and whatever else the leaders define as "success."

Companies in this stage move away from the focused innovation that has propelled them to success and begin to investigate areas where they cannot be "great."

Furthermore, the organization expands beyond its capacity to fill crucial positions with the proper individuals.

While complacency may be a factor in the decline, Collin's study indicates that overreaching is more likely to be the cause of their demise.

The Markers for Stage 2:

Success often leads to pushing for additional growth, putting a lot of strain on individuals and organizational processes. This frequently results in a failure to produce tactical excellence.

The firm takes decisions that fail to:

Rather than concentrating on improving discipline, the firm increases costs due to rising expenses.

People start to think in terms of "jobs" rather than completing their obligations when the firm creates excessive bureaucratic restrictions because it doesn't trust its employees to make disciplined judgments.

The firm has poor succession planning that results in transition difficulties. Typically, this happens due to neglecting to develop leadership from the inside or poorly selecting successors.

When leaders prioritize short-term gains over long-term success, they give themselves more money and perks than putting money into the company's future.

Stage 3: Denial of Risk and Peril

When a company enters Stage 3, internal warning indicators start to emerge. On the other hand, the external outcomes are still robust, and the leaders may use this to explain away the warnings as transient or part of a cycle.

We begin to perceive significant disparities between teams that are "on the rise" and those who are "on the decline." Which of the following phrases best describes your company?

The Markers for Stage 3

Amplify the Positive, Discount the Negative

A tendency exists to explain away poor data rather than confront it.

Leaders develop grandiose goals based on little or no knowledge or outright delusional.

In cases where a mistake might be catastrophic, executives tend to adopt the optimistic viewpoint without clear evidence.

There is a declining quantity of excellent discussion and debate in films. Instead, authoritarian management takes precedence.

External causes are always blamed for any setbacks.

The organization continually reorganizes, which results in employees being preoccupied with internal politics (similar to cleaning the house as a diversion from addressing an issue)

Leaders become alienated, focusing more on symbols and perks than running the business.

This is your final chance to change things around. The unwise circumstances made in Stage 3 are paying off, and organizations in Stage 4 are either looking for a fast fix or returning to the disciplines that propelled them to success in the first place.

There is also a lot of misunderstanding and skepticism about the company's values. People attend here for a salary, and the basic beliefs and mission have lost importance.

Some behaviors will keep you in Stage 4, and others will help you get out of it. Let us have a look at them.

Stage 5: Capitulation to Irrelevance or Death

Stage 5 is the point when all hope is gone. The firm may hobble about for a while longer, slowly slipping into irrelevance, or it may be sold for parts, or it may simply die.

That's all there is to say at this point.

Is There a Way Out?

Failure, according to Collins, is more of a mental condition than a physical one. On the other hand, success is a never-ending cycle of falling down and getting back up.

The only option for organizations in decline to get out of the hole they've dug for themselves is to return to the strong management practices and rigorous thinking that made them successful in the first place.

It should be no surprise that the concepts he recommends are the same ones he outlined in his previous books, Good To Great and Built To Last. For a complete review of the ideas, visit our summaries of those books, but for a quick refresher, here they are again in brief.

Level 5 leaders are ambitious, not for themselves, but for the organization. They are determined to do whatever it takes to make that goal a reality, and they possess a strange mix of personal humility and professional decision.

First Who, Then What

Have unflinching trust that you can and will succeed in the end, no matter how difficult it is. Have the discipline to address the most painful truths of present reality simultaneously.

Great firms make judgments based on these three criteria.

No single defining action or game-changing breakthrough exists. Instead, the procedure is similar to turning a gigantic flywheel, steadily gaining momentum.

﻿Through numerous generations of leaders, excellent corporations create processes for generating progress that doesn't rely on a specific group of individuals.

They have a long-standing set of fundamental beliefs and a mission. On the other hand, they update their operating methods and cultural practices as the world changes.