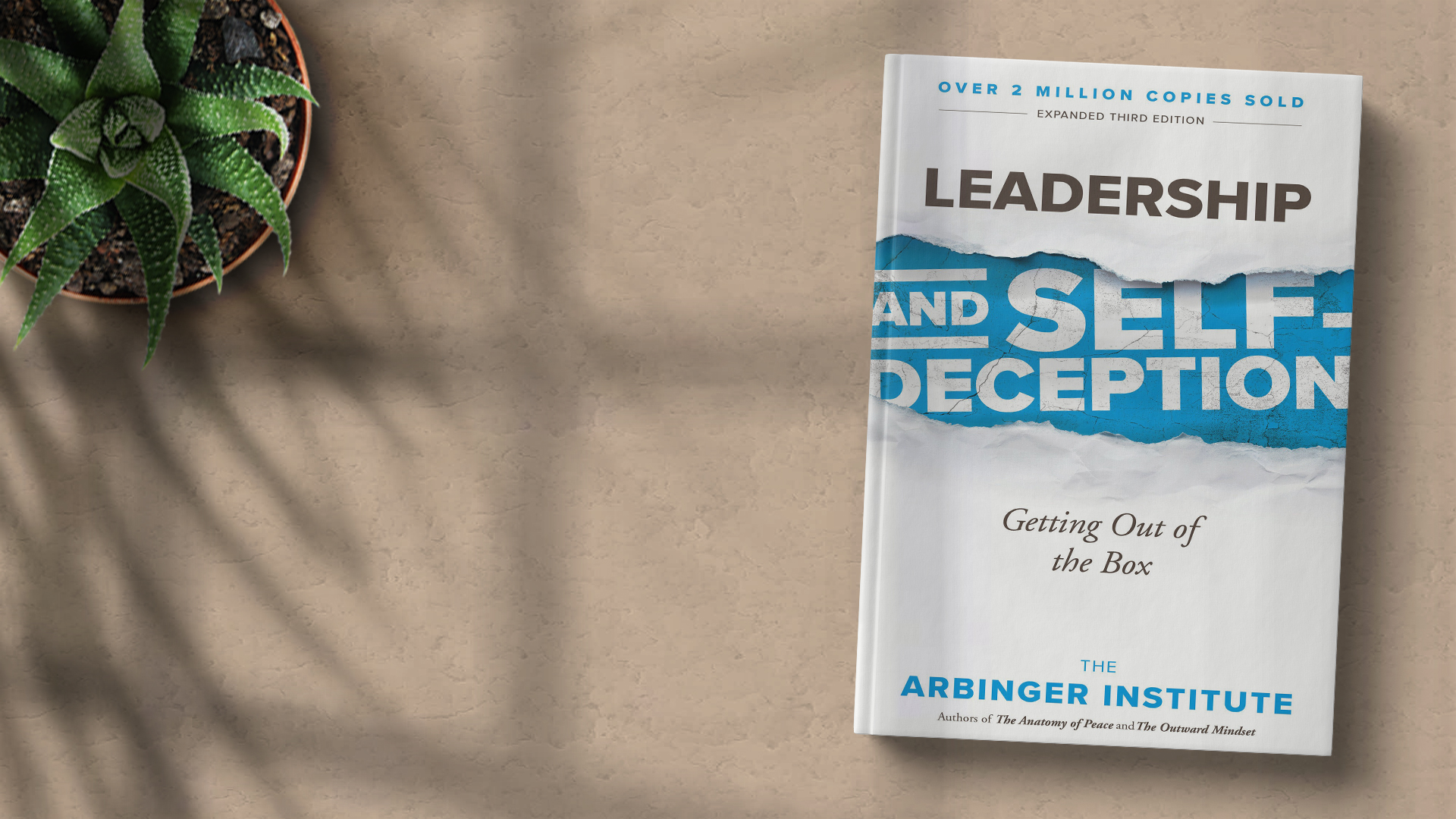 We've all been in circumstances when other people just seem to get in the way of things, whether at work or in our personal life. They just do not comprehend. They just do not understand who we are or what we require. We think of them as egotistical and self-centered.

Leadership and Self Deception authors believe that we are "in the box" and struggling with "self-deception" in certain situations.

The Arbringer Institute's excellent book lifts the veil on how toxic relationships may affect how we act in our personal and professional relationships. And it shows us how to recognize when dealing with self-deception and self-betrayal.

The authors argue that we may step beyond our comfort zones by adjusting our mindset and profit from other people's praise.

Let's begin with a simple "in-the-box" scenario that we can all relate to...

Joe is flying for business and just has enough time to get to the gate and board his jet when he gets to the airport. The queues for security are lengthy as he advances, with holiday travelers and their kids. Joe lets out a sigh.

A young mother stands in front of him, juggling three tiny children and their luggage. Joe is the focus of her attention. Joe mentally wills her to hurry up by looking through her at the holes in the x-ray conveyor. One of Joe's fellow business travelers suddenly goes up and asks if he can assist her.

The book's central principle is demonstrated through this example. Joe is currently "in the box."

Joe believes that he is the center of the universe and that he is more valuable than others at the moment. He perceives the young family as obstacles in his way of arriving at the gate on schedule. The other tourist who assisted the young lady was regarded as "out of the box."

At work, a situation similar to this can arise.

John was assigned the task of writing a response to a client's need. His supervisor gave him a briefing and pointed to some support documents in the distance. The "lessons learned" were not rare when the consumer refused the offer.

Why, in John's opinion, had his supervisor not given him better instructions? He could have done a decent job if he had. His supervisor was a tyrant to him, who didn't express what he needed and was quick to condemn.

In the employer's eyes, on the other hand, John is completely worthless and should have understood what was required. Due to him, the firm lost a good deal, and they'll have to reassess his future with them.

Who is in the box in this job example?

They both perceive each other as a roadblock to success and as an item, not a person.

The "in-the-box" offenders are tricked in both cases. They are blind to the other party's genuine requirements. They are narrowly focused and hence are unable to appreciate the viewpoints of others. Their perceptions of themselves and others are skewed from reality, leading them to deceive themselves about the authentic image.

According to the Arbringer Institute, self-deception is the root cause of popularly known "people problems" in business. To the degree that organizations are troubled by self-deception (i.e., they can't recognize the problem), they are doomed to fail.

The majority of businesses are trapped in a rut.

Success in a business is measured by whether we're in the box or not and how much influence we have as leaders.

I'm sure we could figure out what was suitable if we had time to pull back from possible "in the box" scenarios or halt life.

Returning to the previous situations, we can clearly see the family's requirements at the airport, Joe's needs, John's and his boss's needs. We can understand – with the benefit of "stop" – what is correct.

Consider an instance when you felt compelled to assist a coworker but ultimately declined. Or perhaps there was a time when you thought you needed to apologize to someone but never did.

Maybe there was a moment when you knew you had knowledge that would be useful to a colleague but kept it to yourself. Or when you realized you had to remain late to do some job for someone but rather went home without caring to tell them.

Whatever circumstance you're familiar with, here are examples of when we know what's right yet refuse to do it.

This is referred to as an Act of Self Betrayal by the writers. The act of self-betrayal is a slippery slope that can result in a cascade of bad repercussions.

Here's how it happens:

We go against how we must act toward another individual. Consequently, we begin to interpret the world in a way that validates our self-betrayal, and we seek out or discover justifications for our actions.

We overestimate other people's flaws and our own virtue when we perceive the world through a self-justifying lens. We exaggerate the worth of things to justify our behavior, and we blame others.

When we betray ourselves, we begin to perceive things differently (our perceptions of others, our own selves, our situations, and so on), and everything becomes skewed in a way that makes us feel good about what we're doing.

And many of us have self-justifying pictures that we carry about, prepared to defend against assault since we need to feel empowered the most while we're in the box. As a result, we blame people who do not adhere to our image for failure or trouble.

We drag them into the box with us, and they then blame us for unfairly accusing them. They're also in the box now. They believe that blaming us is justified and that blaming us further is unfair. They eventually start blaming us even more, resulting in a downward spiral.

When you think about it, it's almost as if we're saying to each other, 'Look, I'll treat you badly so you can put it on me. And if you abuse me, I'll be able to put it on you."

If we put ourselves in a box, we invite others to join us. We'll all wind up with self-betrayal getting in the way of what we're trying to do, which is to aid the cause or address the situation at hand.

Lastly, there is the issue of workplace cooperation to consider. Collusion in the workplace is an illustration of being "in the box."

It usually starts when one individual in an organization is "in the box" and fails to concentrate on outcomes, causing coworkers to do the same.

Getting "Out of the Box"

How are we going to get out of this box?

Everything basically comes down to these two questions:

To start, consider this: whenever you feel compelled to "be outside the box" for someone, you are already "out." You get that feeling because you have begun to perceive them as a person.

It's easy to break free from the confines of the box. All we have to do now is concentrate on the folks who are right in front of us. We are out of the box toward them at that moment – when we perceive someone as a person with wants, hopes, and anxieties as genuine and valid as our own.

Understanding the distinction between knowing and acting is critical to breaking out of the box. We must accept that sliding inside the box is easier than remaining outside.

So, how can we break free from the confines of the box?

Here are some pointers to get you started:

All of these arguments have one thing in common: we must pay attention to what our out-of-the-box sensibility is saying to us about what we should do for others.

However, this does not imply that we must accomplish everything we think is desirable. We all have our own obligations and requirements to attend to, and we can't always help others as much or as quickly as we would want.

It's not necessary to assign blame or defend ourselves in these instances. Even if we can't help at the time or in the manner we believe would be ideal, we continue to perceive them as persons we wish to aid. Given the conditions, all we can do is our best.

Leadership "Out Of The Box"

How about an example of being outside the box in a professional setting.

A CEO who saw the significance of being "in and out of the box" instituted a fresh approach to solving organizational challenges. Rather than rushing straight to the source of the problem and demanding that they repair it, the CEO thought about how he could have contributed to the situation.

He convened a conference that included everyone in the chain of command, down to the individual responsible for the problem. The CEO opened the meeting by recognizing the issue and outlining how he believed he harmed the culture that had resulted in the matter. He then presented a strategy for resolving his role in the situation.

After that, he invited everyone else in the room to do the same. When the time came for the person most directly responsible for the situation to speak, the individual openly accepted responsibility for their part in the problem and presented a solution.

When the leader ceased merely allocating responsibility and held himself firmly accountable, a problem that had been raging for years was practically fixed overnight.

This methodology is being used by this organization to solve every problem that arises.

Being confined to a box fosters an ever-increasing amount of negativity. Being beyond the box necessitates seeing others as humans with their own needs rather than objects to support your own.

You are instantly out of the box when you think about others without self-justification. Staying out involves recognizing the detrimental effect of one's own demands and a mental change to gaze outwards.

Companies in the box are battling for survival and conspiring to fail.

Companies outside the box are transparent and cooperative in their approach to success.