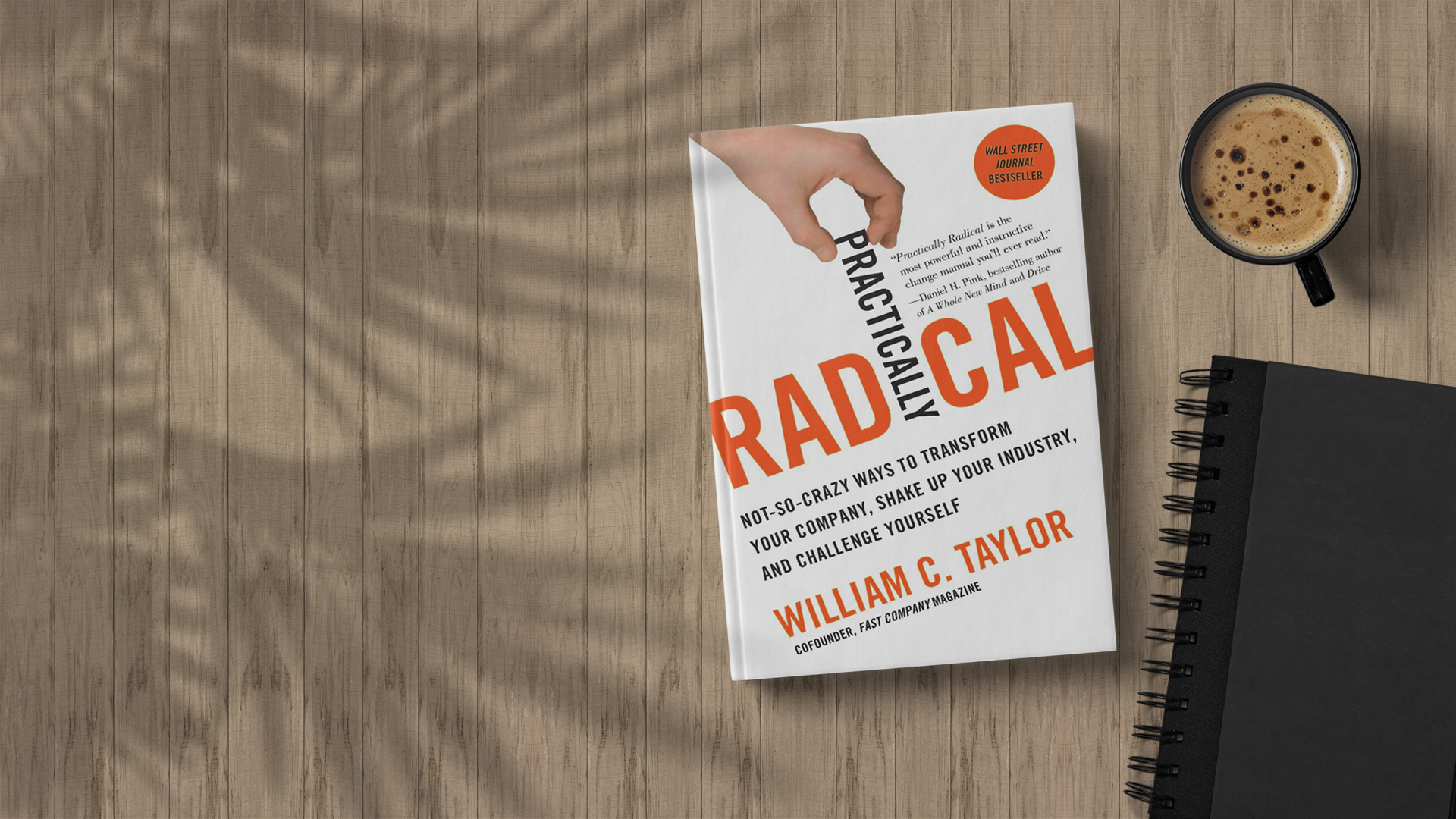 ​​When you're the founding editor of Fast Company magazine, you have a front-row seat to some of the world's most intriguing and successful businesses.

These businesses have been redefining the rules of business for years. Taylor provides in Practically Radical:

It takes a lot of effort to transform your firm, especially if old behaviors are still in place. Taylor demonstrates that the most successful businesses address this issue in two ways.

First, they develop the ability to experience vuja de, which is the inverse of déjà vu. It's the ability to look at a familiar issue as though it's the first time you've seen it. Take, for example, the Swatch Group, a well-known Swiss watchmaker.

The once-dominant Swiss watchmakers had lost their monopoly on the global market by the early 1980s, much like the North American automotive industry had in prior years. In actuality, the Swatch Group (then known as SMH) had $1 billion in revenues but $124 million in losses.

When Nicolas Hayek took over the firm, bankers advised him to sell assets, such as the Omega watch that 007 wore.

Unlike many of his Swiss colleagues, Hayek resisted the temptation to sell assets and relocate industrial activities to Asian nations. Rather, he saw the Swiss' centuries of watchmaking expertise as a competitive edge. He decided to keep both his brands and his production operations in Switzerland.

He had taken a fresh look at a scene that many others had witnessed. Fast forward to 2008, and Omega is generating $1 billion in yearly sales and hundreds of millions of dollars in profit, all while operating on a shoestring budget.

Second, these firms recognize that exploring outside their domains might provide them with ideas that would otherwise go unnoticed. There are many famous Henry Ford anecdotes, but none is more instructive than this one.

Ford visited a Chicago butcher in 1912. He observed the meat was suspended from hooks installed on a railway. Each guy would push the corpse down to the next man as they concluded their portion of the procedure. As the narrative famously closes, the first assembly line the world had ever seen was building vehicles at Ford.

Henry Ford isn't the only one who looks for inspiration outside of his business. Over a decade, Commerce Bank (now owned by TD) grew from a market worth of $400 million to $8.5 billion by taking cues from the retail business rather than the banking industry.

What sectors do you think you're borrowing concepts from?

1. Most companies in most professions suffer from tunnel vision, making it difficult to see a more promising future. What are your options for overcoming this? Recognize that "what we know restricts what we can envision," as Cynthia Barton Rabe does.

Every day, go to work as though it were your first day. You'll see things you've never noticed before, and you'll begin to discover new possibilities for yourself and your company.

2. Because they hunt for ideas in the same areas as everyone else, most leaders perceive things the same way everyone else does. Make it a point for you and your team to steal ideas from different sectors.

Instead of asking what your rivals are doing, inquire about what other firms in other industries are doing. This is where the most unique ideas may be found.

3. History can be a scourge - and a benefit - in problematic institutions steeped in tradition and achievement. The problem is to break free from the past while remaining true to it. Check-in with your organization's basic ideals. You could discover that returning to your founding values transforms your company (again!).

4. The role of the change agent is more than merely surfacing lofty ideals. It's about instilling a feeling of urgency inside and outside the company and then putting that urgency into action. So quit talking about it and do something about it.

5. Change leaders never can stop improving in a company world that never stops evolving. It also doesn't matter how you go about doing it. Simply set out on a quest to learn more than your competitors and, more importantly, to put what you've learned into practice.

Shaking Up Your Industry

If changing your firm is difficult, shaking up a whole industry is much more difficult. Companies that are successful in this regard pay attention to two factors.

To begin, organizations such as Zappos (the world's biggest online shoe store) and Ryan Air have shown us that disrupting an industry necessitates becoming the "most of something."

Zappos' calling card is exceptional customer service. Ryan Air is removing as many costs as possible from their operation to pass them on to their clients.

These businesses also understand that being the "most of anything" does not necessitate a narrowing of focus. In reality, Zappos considers itself a customer care company rather than an online shoe shop. This opens up a whole new universe of opportunity for them in the future.

Second, being different isn't good enough; you have to be different on purpose. This implies that you must have a goal in mind. This does not mean that you must spend two days at an off-site retreat deciding on your company's mission before returning to put banners and plaques on the walls.

What you need to do is incorporate your hobbies and ideals into your workday. The Geek Squad, for example, is known for its Volkswagen Beetles and eccentric attire. Their brand, though, is much more than a sales gimmick. They have a book called "The Little Orange Book."

Every single member of the Geek Squad is required to sign a six-point promise. My favorite item is number five: "I will consider my job done only when my client is completely overwhelmed with joy. And instead of assuming they're happy, I'll ask them.”

To revolutionize an industry, you must be the best at something and distinct on purpose.

5 New Rules for Starting Something New

1. Being "fairly decent" at everything isn't enough. Innovators who start with a blank piece of paper find out how to make the most of it. Simply ensure that your "most of something" is something that your clients and prospects will value.

2. It doesn't mean you can't do a variety of things just because you're "the best at something." Being singular does not imply being restricted. Consider the case of London Drugs. Rather than purchasing a corporate aircraft for its executives, it founded a charter airline. It utilized the London Drugs ethos to make it as successful as the drug stores it is named after.

4. Companies must connect clients emotionally, not just logically, in a world of limitless choice. Remember that if your clients can survive without you for a while, they will eventually. Zappos may not have the cheapest shoes online, but they will go great lengths to establish an emotional bond with their clients. As a result, repeat business is tremendously profitable.

The work you do on yourself as a leader is perhaps the most difficult. A new generation of executives recognizes that engaging with a workforce that demands involvement and wants to be committed in their job necessitates adopting a new mentality or two.

To begin with, these leaders recognize that they do not need to know all of the solutions. Taylor brings us to the Orpheus Chamber Orchestra, a new type of leadership that acts as an antithesis to this approach.

Orpheus has functioned without a conductor from its formation in 1972 and through its ascent to fame as one of the world's most renowned chamber orchestras. Consider how an entire organization could run if leadership was delegated to whoever was most qualified for the job given the conditions.

Second, great leaders recognize that latent creativity exists everywhere. It may sometimes be found outside of your company's gated garden, as Netflix has taught us.

Netflix launched the Netflix award, which offered a $1 million incentive to anybody who could enhance the Netflix algorithm's effectiveness in suggesting new movies to subscribers by 10%.

Hundreds of thousands of individuals from 186 different nations came together to try to address the problem. Finally, a group of people on the verge of winning the reward united together at the last minute.

Imagine a world. A group of individuals greater than the total number of people who work for your company tries to address one of the most pressing difficulties your company will face. If I've ever seen a creative solution, that's it.

Third, all of these leaders have the quality of "humbitious." Jane Harper, a long-serving IBM employee, invented the name. Their unique combination of humility and desire allows them to learn new things every day and work tirelessly toward whatever objectives they have set for themselves.

1. True business experts don't claim to be professionals in every field. This will be difficult at first, but you will not lose your team's respect by admitting you don't know everything.

2. The most innovative leaders don't rely solely on hidden talent to generate fresh ideas. They analyze the ideas they attract by depending on the benefits of collective genius. This implies giving your staff a say in the idea-generating process and the concept selection process.

3. Not every fresh idea is a good one. As a result, leaders who solicit a large number of views must learn to reject the bad ones without depressing those who offered them. This is a delicate balancing act that must be accomplished. You risk alienating your team or, worse, losing sight of your most critical objectives if you don't.

5. Humbition is more than just a personal leadership style. It may be a style of life in terms of organizing. Imagine the power of an entire organization that is both modest enough to continue learning and ambitious enough to put what they've learned to work for you.