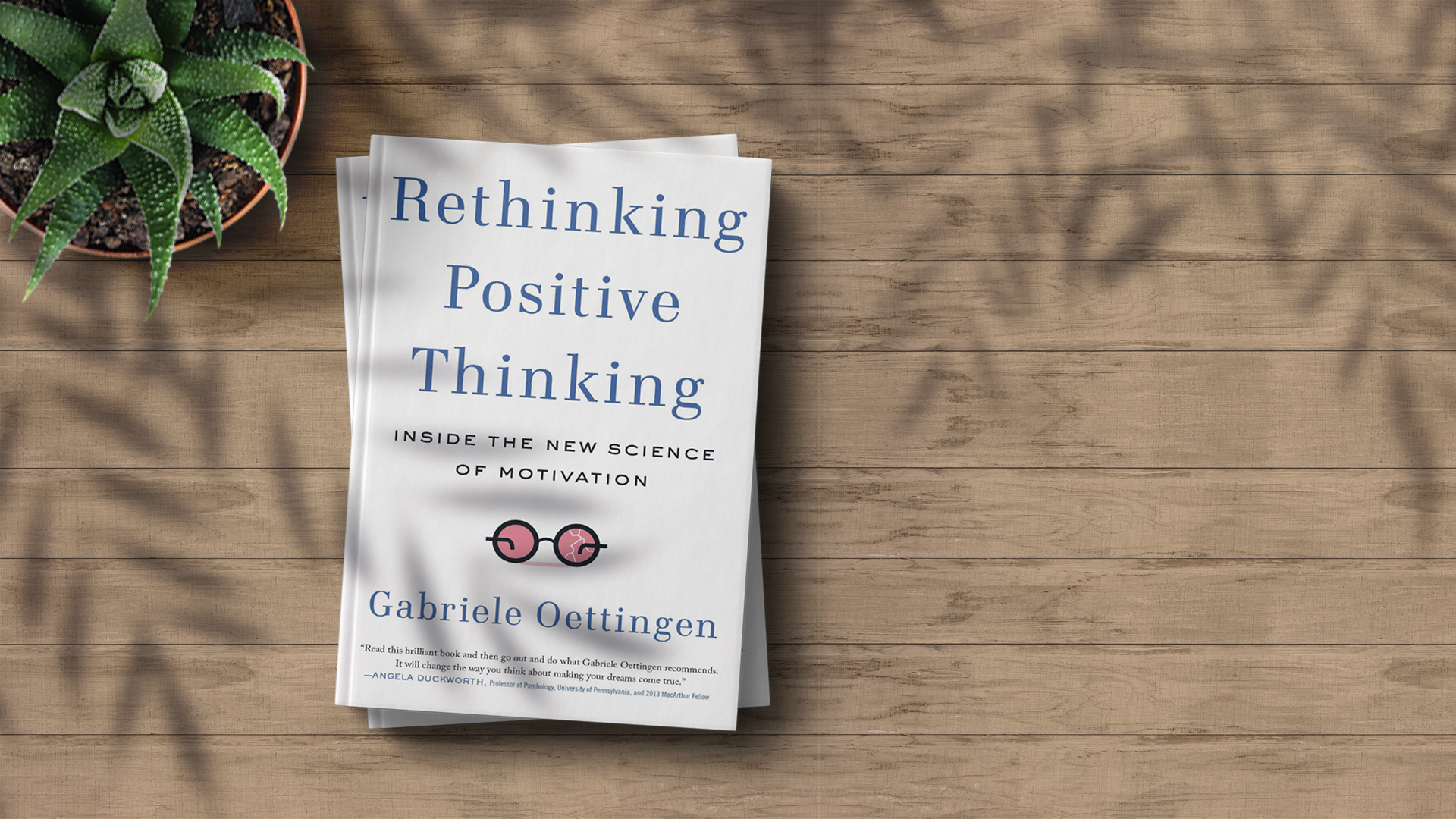 Rethinking Positive Thinking is about figuring out what you want from life and how to get there.

Gabriele Oettingen, the author, has spent over two decades researching this issue and has come to an intriguing and surprising conclusion. The barriers we feel stand in our way of attaining our biggest objectives might help us achieve them faster.

Essentially, her study demonstrates that simply daydreaming about the future decreases the likelihood of achieving your greatest aspirations and dreams.

Join us for the next 12 minutes as we discuss why this is so and what you should do instead.

What Is Positive Thinking

Let's start from the very beginning and define what positive thinking is.

Positive thinking is defined by Martin Seligman, the creator of the positive psychology movement and author of Authentic Happiness, as views or expectations about the future that are based on previous accomplishments.

Take note of the phrase "based on past success," which is omitted from most positive thinking material. You can't expect your dreams to come true just by sitting in your chair and thinking pleasant things.

This may seem self-evident, yet many of the best-selling books on positive thinking will teach you just that.

Seligman has conducted several studies that have shown a clear link between optimistic expectations and the presence of prior achievement.

As a result, Oettingen concluded that there are two sorts of optimism worth studying. These are optimistic expectations based on prior successes and more free-flowing ideas that we may simply refer to as wishes.

So Oettingen decided to put her hypothesis to the test by wishing to lose weight, a desire that a large part of the population makes every year on or around New Year's Eve.

She conducted research with twenty-five overweight women who were part of a weight-loss program. She had some of them imagine finishing the weight-loss program successfully. In contrast, others imagined the challenges they would experience along the road.

Surprisingly (although not to us, because we gave away the punch line in the opening), women who dreamed about their triumph shed twenty-four pounds fewer on average than women who fantasized about their problems.

This study was conducted in 1991. No one in the psychology field wanted to go any farther since the power of optimism had gotten so much attention and effort in the general public.

Unfazed, Oettingen persisted in her research, conducting study after study that concluded the same thing. Unjustified optimism does not help individuals achieve their goals; in fact, it hinders them.

The Upside of Dreaming

Positive dreaming isn't always harmful, as Oettingen points out. There are several instances where it is beneficial.

The first scenario is when the duties are straightforward. The easier the work, the more positive daydreaming will aid you. Why? Simple jobs don't have a lot of barriers to overcome. If I daydream about how great it would feel to finally clean up the garage, I can just go to work and do it quickly.

The second instance in which it is beneficial is when you are awaiting an outcome beyond your control. For example, suppose you are nervously awaiting the results of a medical test. In that case, positive dreaming can help you get through that period in a far more peaceful manner.

Positive dreaming may be used to relax in general.

It also assists you in the third circumstance by allowing you to explore prospective desires without needing you to commit. This is useful in identifying what you really desire, as long as you understand where the advantages begin and end.

The Downside of Dreaming

Let's move on to the disadvantages now that we've addressed the benefits, which are far fewer than you would have thought.

There are three major causes behind this.

The first is a result of one of the advantages we discussed in the previous section. When you daydream about the future, you get calm. That relaxation will aid you in getting through a tough or tiresome situation.

Still, it will not assist you in achieving the content of your fantasy. That's because your mind is tricked into thinking you've already done it, leaving you with less motivation to follow through. Boo.

The second reason stems from the first: happy imaginations make you unable to manage difficult activities that need deliberate effort. This is because your fantasies sap your energy and make it harder to complete demanding activities.

The third and last reason is that positive fantasies trap you in a loop of dreaming without allowing you to consider whether or not your dream is realistic. Which, of course, would need more energy than you have right after the daydream.

It's not all doom and gloom, though. Oettingen began seeking a more effective approach to empower people in achieving their objectives and ambitions. She discovered it in a technique she called Mental Contrasting.

It's a very straightforward process. When you have a good dream about whatever you want to achieve, you instantly see the problems and hurdles you'll face on your way there.

This would bypass any negative consequences that your imagination would normally have (such as relaxing you and draining you of energy) and force you to take action to remove the impediments.

So she went about devising an experiment to test whether or not her theory was correct.

She gathered 168 female students from Berlin institutions. She asked them to consider a goal they wanted to accomplish, as well as a list of advantages of reaching the objective and difficulties they would meet along the road.

She then divided them into four categories:

In some ways, the results were disappointing, but in others, they were quite exciting.

The unfortunate aspect was that just a small percentage of those who utilized the mental contrasting approach exhibited substantial gains in their motivation to achieve their objectives.

The most thrilling element was that the ones who improved truly thought they could accomplish it. This means that the technique only motivates people to work toward goals with a high likelihood of achievement.

Mental contrasting is effective for a variety of reasons:

While Oettingen was studying mental contrasting, her husband, Peter Gollwitzer, studied implementation intention, which is an intriguing issue.

In its most basic form, an implementation intention is a plan that specifies how and when you want to carry out a task. In our example, how do we expect to accomplish our objectives and overcome our challenges?

Several studies in various disciplines all show the same thing: having an implementation intention enhances the chances of finishing a job or achieving a goal substantially.

The exercise was the subject of the most well-known study in the implementation intention literature. Three groups of participants were specifically urged to exercise at least once the following week. They were given various instructions at the start:

When they received the findings, they discovered the following:

Isn't it fascinating? Study after study has demonstrated that our conventional wisdom on the subject—that individuals merely required more drive—is simply incorrect.

Instead, if you figure out exactly what you need to accomplish and when you'll do it, the results will be dramatic.

WOOP: Putting It All Together

Oettingen was so taken aback by the findings in both mental contrasting and implementation intents. She discovered that combining the two was much more potent than each of them alone.

MCII was the initial term for this newly merged technique, and it wasn't exactly an appealing one. She discovered that when she presented the approach in simple English, it spelled out WOOP, which isn't a real word but is a lot more appealing.

The acronym WOOP stands for:

Here's how it works in practice and how you may use it whenever you have a desire or a goal you want to achieve.

Then get down to business!

WOOP is a great method for improving your chances of accomplishing your goals.

There are several advantages, including that it will drive you to be hyper-realistic about your objectives and action-oriented in your pursuit of them.

This book may be less thrilling and enticing than others that claim you can utilize the power of your thoughts to create everything you desire in your life. Still, you will love the end result far more.