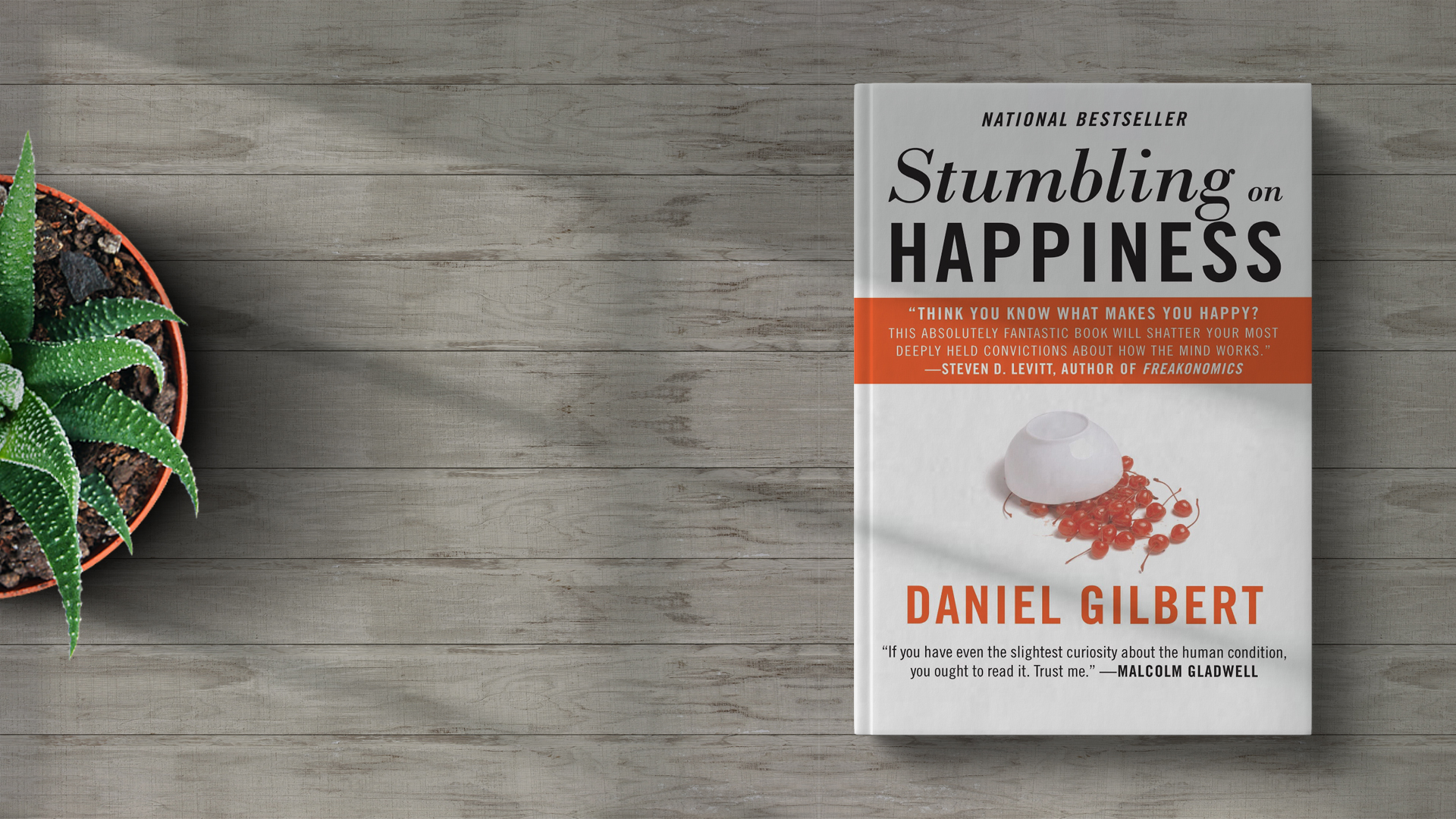 People spend so much time trying to guess what will bring happiness in the future. For some of us, it's the family trip we've always wanted. For others, it's the new automobile we've been eyeing for years, or it can be finally paying off their mortgage.

We are truly horrendous at this activity, according to Dan Gilbert, for three primary reasons.

Gilbert believes that the cure is something that most of us will overlook. Follow us for the next 12 minutes as we investigate why we aren't very good at forecasting what will make us happy and learn how to do it correctly.

Why We Think About the Future: Prospection

Here's a fascinating fact: humans are the only species on the planet who consider the future. Gilbert refers to this process as "nexting."

The first form of nexting is a survival technique that occurs unconsciously and instantly. For example, if you've ever been strolling on a path and heard the rattlesnake, your initial reaction will be to run as fast as you can away from the sound. Your primitive brain is wired with these impulses.

The other sort of nexting is more long-term planning, such as deciding where you want to retire or what you'll consume for lunch at that diner you've always wanted to try next week.

This form of nexting takes place in our frontal lobes and helps us anticipate future events. We do this for a variety of reasons:

That's nice and lovely, except for the fact that we're not really skilled at it. As a result, we make counterproductive decisions.

Shortcoming #1 - Realism: Filling In and Leaving Out

The first flaw in our imagination when it comes to anticipating what would bring happiness is that we fill in the blanks incorrectly and leave out important aspects.

Numerous scientific investigations have demonstrated that human recollections are unreliable reconstructions of what actually occurred in the past.

Rather than complete records of previous events, such as a video clip, our brains save fragments of prior occurrences in various regions of the brain. When we wish to recall a memory, our brain looks for such pieces and puts them together to form the recollection.

The imagination fills up the gaps that aren't really there. And therein is the problem: sometimes, the things we use our creativity to fill in the blanks aren't true. The brain then reconstructs the memory using the newly created information. This is why 100 different people at an event may give you 100 distinct accounts of the same event.

Gilbert points out that this fabrication occurs so rapidly and easily that we have no idea what's going on. All we know is that whatever image we just conjured up in our heads is an accurate picture of the event.

Let us now consider our forecasts for the future. How excited will you be if your best buddy invites you to a party next week?

Some intriguing things happen when your imagination works to find a solution for you. If you're like most people, you'll start filling in information about the party, such as where it will be held, who will attend, and what food and drink will be served. And you'll use those data to forecast how pleased you'll feel.

The trouble is that your mind went through this entire process of filling in details before you ever realized what they were. Now you're making decisions based on your (probably erroneous) guesses.

The crucial thing to remember here is that your brain does the same thing while thinking about more important things in life, such as what job you should get.

We don't consider how much our mind fills in when we look at the future, and we don't think about what it really leaves out.

When asked how they might feel two years following the untimely loss of their firstborn child, most say they would be heartbroken, unable to get out of bed in the morning, and considering suicide.

As Gilbert points out, hardly one asked this question thinks about the other things that may happen in the next two years, such as going to another child's play, snuggling up to their spouse, or reading a book while watching a beautiful sunset.

This is a stark example, but it demonstrates that our imaginations seldom capture the whole narrative.

Shortcoming #2 - Presentism: Projecting the Present onto the Future

This flaw is a little simpler to explain. In short, our imaginations aren't as creative as we think they are.

Essentially, we have a tendency to fill in gaps in the future with information from the present. We believe that whatever is happening today will continue to occur in the future.

For example, if you've stuffed your stomach during a holiday feast, it's difficult to imagine ever being hungry again. We are oblivious that our future selves will experience the world differently than we do today.

When scientists are told to make predictions for the future, they nearly invariably mistake forecasting that the future will be too similar to the present. According to respected experts, humans will never experience space flight, televisions, microwave ovens, organ transplants, or nuclear energy.

We have a tough time seeing a future in which we think, want, or feel differently than we do today. That's because we have a propensity to project the present into the coming years.

For example, suppose you're having one of those days where everything seems to go wrong. In that case, you're not going to be excited about the get-together you've arranged with your pals next week.

Without noticing it, how you're feeling right now has a significant impact on your ability to anticipate your happiness in the future. And, to top it all, you're completely unaware of what's going on.

The process of causing anything to be or appear reasonable is the definition of rationalization.

We all have a psychological immune system that keeps us safe from a wide range of emotional disturbances. It works in the same way that all of the other processes we've discussed so far: we don't even realize it's there.

The final effect is that we "cook the facts," as Gilbert puts it. Here's a brief rundown of research Gilbert conducted to help explain.

A group of test volunteers was invited to a fictitious job interview that they mistook for the real thing. They were asked how they would feel on a scale of 1-10 if they didn't get the job during the pre-interview (in the middle of several other questions).

They didn't feel as awful as they expected when they didn't receive the job (since it was the whole objective of the experiment). In fact, they were just as pleased after a short time as they were before the interview.

With three limitations, this research concludes that our psychological immune system activates to protect us against bad events.

The Solution: Asking Others Experiencing It Right Now

As Gilbert points out, much of our knowledge is based on secondhand information rather than first hand experience. If you compile a list of everything you know and label it as firsthand or secondary, you'll see that this is true.

We believe and trust many things we've heard secondhand. Still, when determining what makes us happy, we nearly always rely on our "nexting" process.

That method, as we've seen, does not produce positive results. Because of our selective and unreliable recollections, we forget how good or awful things were in the past. Then we project those memories into the future to create erroneous predictions.

This is the summary section where we discuss Gilbert's counsel, which he says we will most likely ignore.

Asking someone who is experiencing it right now is the most efficient method to predict whether or not a future condition will make you happy.

As Gilbert points out, the human species is like a living library of information on how it feels to accomplish just about everything. All you have to do is ask for information.

According to research, people who are compelled to utilize surrogates to estimate how pleased they would be about a certain envisioned future make highly precise predictions about their future sentiments.

So, why are we refusing to accept the solution?

We don't want to think of ourselves in the same way as the ordinary person. Others may be terrible at forecasting their own pleasure in the future, but not me. That is, as you may have surmised, what EVERYONE says. So, although you're rejecting the answer because you're different, you're just confirming that you're the same as everyone else.

The largest blunder we make, according to Gilbert, is that we don't make accurate forecasts about how good collecting more things will make us feel.

A mountain of data indicates riches make little to no difference in your level of happiness after you reach a certain level of wealth. Despite this, we continue to strive for more.

The issue is that the entire market economic system is based on individuals purchasing and creating more and more things. As Gilbert points out, the economy would grind to a standstill if everyone was satisfied with the number of goods they owned.

So, the next time you're about to make that big splurge, think about locating someone who has already done so. Think of asking them how much enjoyment it brought them beyond the first rush of excitement.

The revelations may shock you.