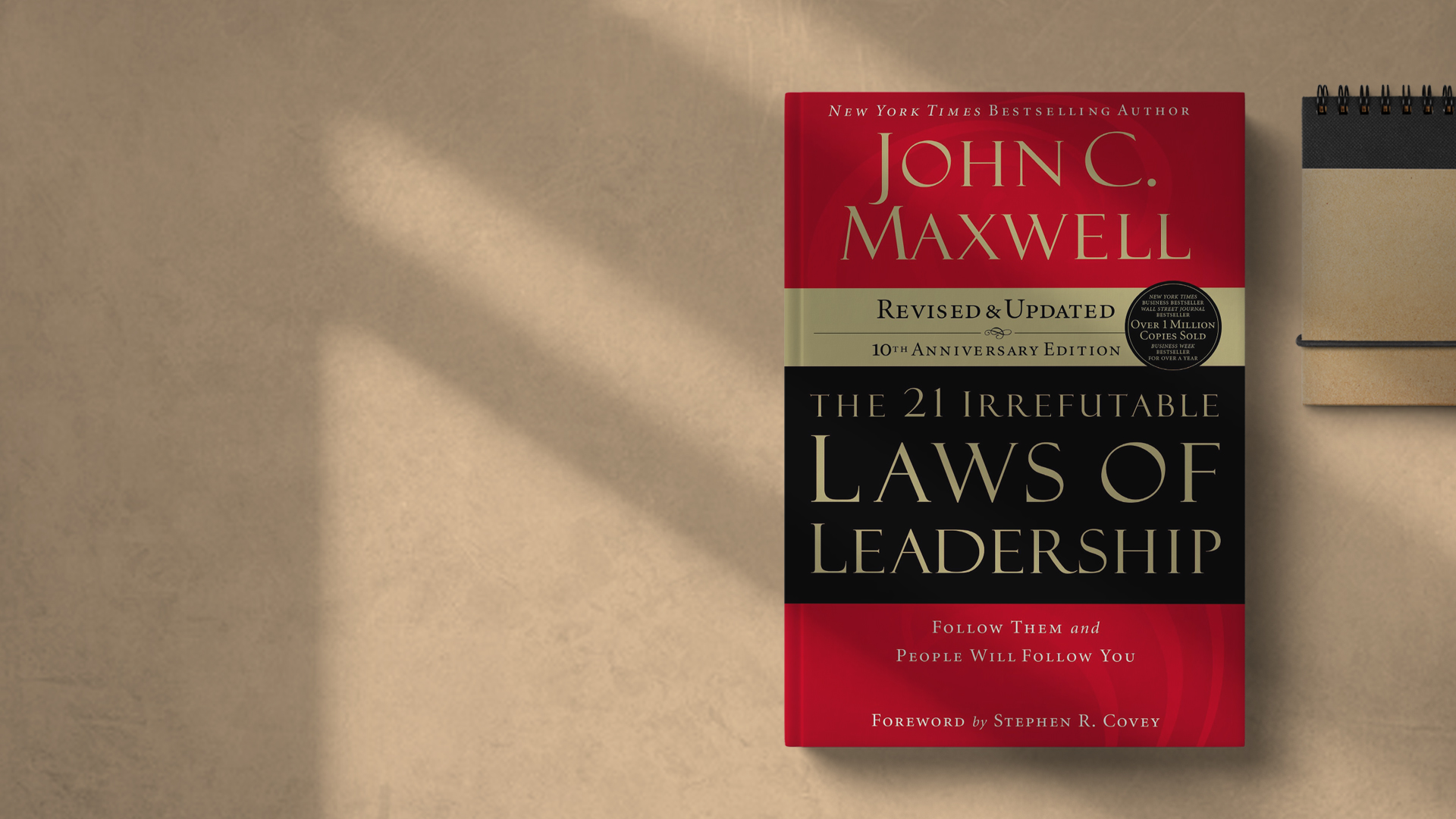 John Maxwell has identified 21 Irrefutable Laws of Leadership that, if followed, may help us all become more successful, productive, and accomplished leaders.

The book covers all aspects of leadership and is so dense with information that it's impossible to go through all 21 laws in 10 minutes. As a result, we've chosen the five laws that we believe will have the most influence on your career and life.

Let's get this party started!

As said by Maxwell, a person's level of effectiveness is determined by their capacity to lead. What exactly does he mean?

We have two options for increasing our effectiveness: we may invest time and money on efficiency skills to improve our performance, or we can raise our leadership level. The link between leadership and energy, according to Maxwell, is mostly seen in athletics because outcomes are rapid and clear.

Baseball, soccer, and ice hockey are just a few examples. Almost every squad has extremely gifted guys. A great deal of skill.

However, not everyone has the potential to be a champion. Champions have clearly defined leadership. And business is no exception. Apple's founder, Steve Wozniak, was the brains behind the company. His leadership lid, on the other hand, was open.

That was not the case with his business partner, Steve Jobs, as we all know. He established a world-class organization because his lid was so high.

So, how can you put the Law of the Lid into practice? We should ask people to assess our leadership, according to Maxwell. He suggests that we chat to our employer, our spouse or partner (yep, they know us best! ), a few coworkers, and a few individuals we lead.

We should ask them to grade us on a scale of one to ten in the following areas:

The results are then averaged and compared to our own judgment.

Is our leadership ability better or worse than we predicted based on these assessments? What is the best way for your firm to improve its leadership capability? What factors influence our evaluation of how competent we are in this area? How eager are we to develop as a leader?

While Amundsen meticulously planned his journey, researching the ways of Eskimos and other seasoned Arctic explorers, Scott remained true to his own views. Scott chose to employ motorized sleds and ponies instead of dogsleds, as the local experts recommended.

Only five days into the journey, the motors failed. The ponies were not suited to the freezing cold. As a result, the two-hundred-pound sleds were hauled by the squad members themselves.

According to Maxwell, Scott's voyage to the Pole is a perfect example of a commander who was unable to guide his troops.

Navigators do more than just steer their ships in the right direction. They have a vision for how they want to get to their goal, they know what it will take to get there, they know who they'll need on their team to succeed, and they see obstacles coming long before they show on the horizon.

In addition to measurable criteria like budgets, resources, and talent, good navigators look at intangibles like timing, morale, momentum, and culture.

Navigators pay attention to what others have to say: We will never know everything, no matter how brilliant a leader we are. That's why the best navigators collect data from a variety of sources.

Navigating leaders acquire their ideas from a variety of places. They pay attention to individuals of their management team. They speak with members of their group to learn more about what is going on at the grassroots level.

They also spend time with executives from outside the company who can serve as mentors. So, how can we put the Law of Navigation into practice?

Maxwell recommends that we rely on our previous experience and have purposeful interactions with experts and team members to obtain knowledge.

We should also assess current situations that may affect the outcome of our endeavor for a project or important work for which we are currently accountable. We should only make our action plan after we've completed these stages.

In most cases, unless you take serious steps to resist it, you will attract others who share your attributes. Maxwell's Law of Magnetism states that "Who you are, attracts who you are."

Those are drawn to — and attracted to — people with similar backgrounds. Name them what you want: tribes, teams, societies, fraternities... whatever you want to call them, people gravitate toward those that resemble themselves.

According to Maxwell's perspective, leadership is no different: people are drawn to leaders who share their beliefs.

It makes no difference whether the values provided are good or negative. In any case, the attraction is powerful.

People instinctively follow leaders who are more powerful than they are. However, we must consider the Law of Magnetism, which states that if we are a 7 in leadership, we are more likely to attract 5s and 6s than 2s and 3s. The individuals we attract will be similar to us in terms of style and skill.

It simply proves that the better leader we are, the better leaders we will recruit. And this has a huge bearing on everything we do in our company. We must become the type of person we wish to attract if we are to attract better individuals. So, how do we put the Law of Magnetism into practice?

Maxwell believes that we may need to improve our character and leadership skills depending on who we attract. We need to locate mentors who are willing and able to assist us in progress in each area, such as a professional you admire or a professional coach.

Our leadership teachers should preferably work in the same or a related field and be many years ahead of us in their careers.

When we observe someone very gifted, it's easy to think that his success is due only to his abilities.

Incorrect. Nobody achieves greatness by himself. Leaders do not succeed on their own. There are no leaders among the Lone Rangers. Consider this: you're not leading anyone if you're alone, are you?

Those closest to a leader judge their leadership ability. Leaders must be able to deliver. There is no replacement for putting on a good show. They seldom have the chance if they don't have a solid squad.

Those closest to them decide their potential. Maxwell's Law of the Inner Circle explains this. While most people form an inner circle of friends, they seldom do it strategically. We instinctively surround ourselves with individuals we like or feel at ease with. Few individuals consider how those closest to them influence their ability to lead or their effectiveness.

The capacity to influence those who affect others is one of the keys to effective leadership. How do we go about doing that? By enlisting the help of influential people. People in our close circle must be multipliers or adders. They should have a track record of being valuable assets to the company.

The Inner Circle Law assists us in making development. Once we've used up all of our time and energy, the only way to make a bigger difference is to enlist the help of others. So, how can we put the Inner Circle Law into practice?

Maxwell advises that we make a list of your inner circle members' names. Write what each individual provides next to their name. Look for any gaps or duplicates. Then start looking for people to fill the gaps and think about how you might cut down on redundancy. Also, be ready to put current members who have the potential to exceed your expectations to the test.

Maxwell says that HBO's "Band of Brothers" is a great study in leadership since it tells the narrative of Easy Company. When the soldiers were led well, it made a difference in how they performed and the result of their engagements and, eventually, the war.

What was the significance of that? Because what people see is what they do. The Law of the Picture dictates this. When leaders lead by example with the appropriate deeds, as Commander Winters did in Easy Company, their people follow suit and prosper.

Great leaders usually seem to combine two apparently opposing characteristics. They have a unique combination of vision and practicality. They can look beyond the present.

Many leaders are tempted to just communicate their vision. However, this is insufficient. An idea must also be lived by the leader. The picture comes to life thanks to the leader's successful modeling of the vision.

Good leaders are always aware that they are setting an example and that others will follow their lead, for better or worse.

Generally, the better the activities of the leaders, the better the people. As we attempt to grow as role models for our followers, Maxwell tells us to keep the following in mind:

So, how can we put the Law of the Picture into practice? Maxwell recommends that we write down three to five things that we wish our employees accomplished better than they do today. Make a list of them. We now ask someone else to evaluate us on the same criteria.

If we have poor self-scores, we must improve our behavior. If our ratings are high, we need to set a better example for our employees.

So there you have it: five of John Maxwell's twenty-one irrefutable leadership laws. If you love what you've read, go get the book; there's so much to learn.