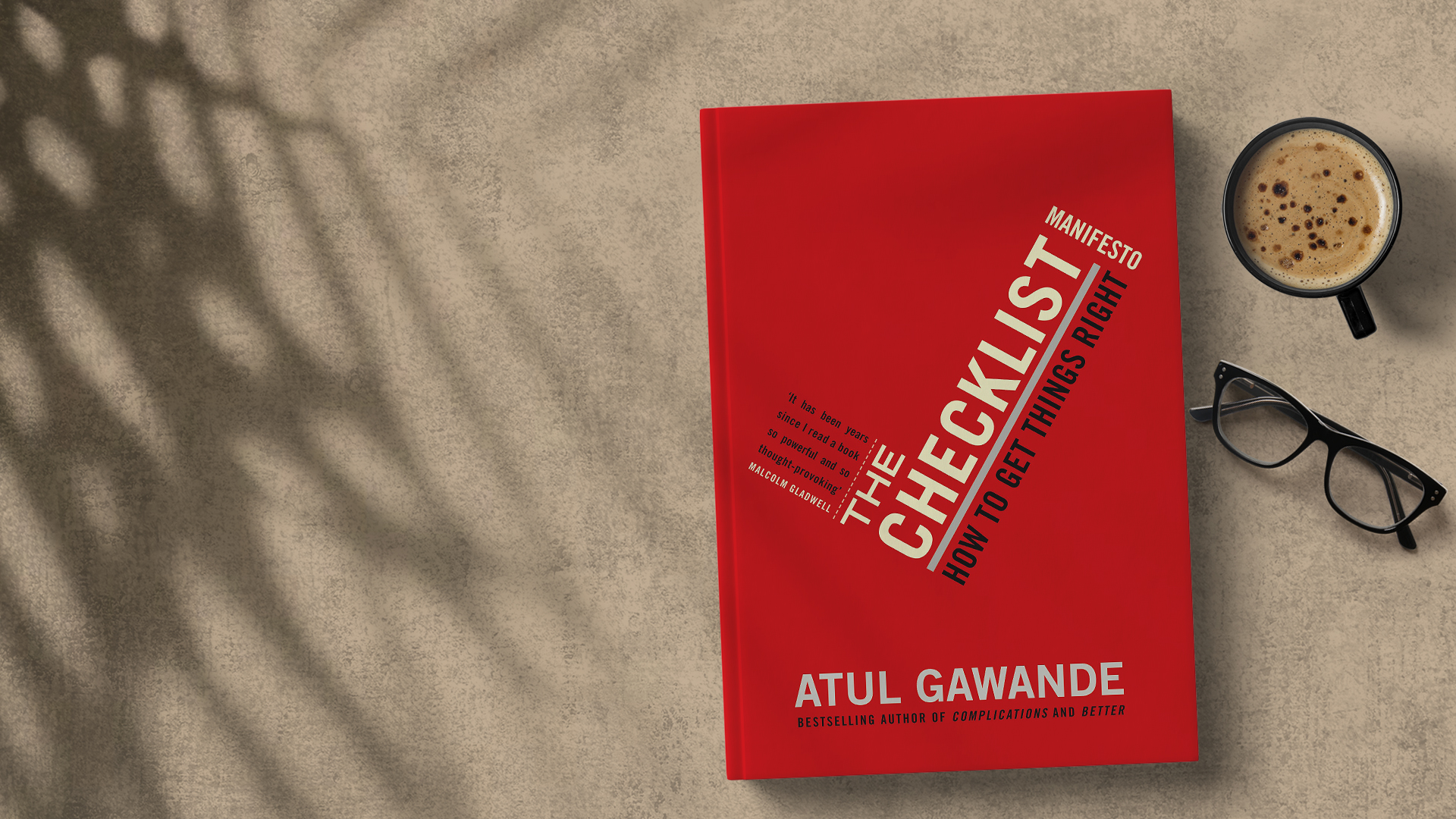 Atul Gawande has a shocking idea: that a basic, modest checklist may fix many of the problems we have today.

As a surgeon, he noticed that many patients were developing terrible infections, with thousands of people dying as a result. At the same time, they were in the hospital for other reasons. Hospitals, in other words, were murdering people.

His book details the remedies he helped implement at surgical centers throughout the world, which substantially improved patient outcomes.

His book tells of his incredible experience. And it shows how checklists are being used to solve issues in other industries, such as construction and aviation.

We fail as humans for a variety of reasons. Some things are simply beyond our control and comprehension. Even with the incredible technological advancements of the last century, our physical and mental abilities remain restricted.

However, as Gawande points out, we have a lot of influence over many things, which we may divide into two buckets.

Ignorance is the first bucket. In other cases, science has only provided us with partial knowledge of a problem. The weather forecasters can't always anticipate snowstorms, no matter how hard they try.

Ineptitude is the second bucket. These are places where we have information, but we don't know how to use it properly. These are the buildings that are constructed wrongly and collapse; the snowstorms that might have been anticipated.

And these are the precautions that should be taken before a surgery to prevent infection in a patient.

That last example is one with which Gawande is familiar. Each year, 150,000 people die in hospitals following procedures in the United States, with specialists estimating that at least 75,000 of them might have been avoided.

In the book, Gawande goes on to say:

"Failures of ignorance we can forgive. If knowing the best thing to do in a given situation does not exist, we are happy to have people simply make their best effort. But if the knowledge exists and is not applied correctly, it is difficult not to be infuriated."

In cases like these, he claims that the humble checklist is the answer.

Checklists that Save Lives

The loss of human memory and attention is one of the issues that checklists address. We all know how bad our recollection and focus can be at times - anyone who has forgotten where they left their keys knows how bad it can be.

Gawande, in particular, has seen this play out in operating rooms all around the world.

If you ask any surgeon if they take all of the precautions necessary to avoid central line infections (bacteria or viruses going into the body when an IV is put), they'll respond, "Sure, I do - we learned that on the first day of med school."

To put this scenario into context, doctors must follow the five actions to avoid these infections.

There would be no central line infections if all surgeons followed those five procedures in every surgery.

But then every surgeon will tell you that they always follow the instructions. And the statistics indicate that tens of thousands of individuals have central line infections in hospitals every year.

Professor of anesthesiology and critical care medicine at Johns Hopkins University School of Medicine, Peter Pronovost, M.D., Ph.D., decided to create a checklist for these procedures.

Before the operation, he requested his nurses to observe the surgeons and note whether or not they followed the protocols.

The data was obvious after a month. The surgeons missed at least one step in more than a third of the instances.

When he implemented the checklist at the hospital, the ten-day-line-infection rate dropped from 11% to 0%.

Within the next 15 months, this checklist saved a couple million dollars in additional expenditures by preventing 43 infections and eight fatalities in this single hospital (central line infections need treatment).

The state of Michigan chose to roll out this incredible technology across the state. Over eighteen months, they saved over 1500 lives and $175 million in additional expenditures.

Checklists, it turns out, may be used for a variety of purposes. For entrepreneurs, one of the most intriguing discoveries is that they can create more money.

Gawande spoke with three experienced investors who all utilized checklists in their work. Guy Spier, who manages the business Aquamarine Capital Management and is in charge of a $70 million fund, was one of them.

The second investor, who did not want to be recognized, is a director at one of the world's largest funds, worth billions of dollars.

Mohnish Pabrai is the third investor. He is a managing partner of Pabrai Investment Funds. He manages a $50 million portfolio and uses checklists to help him decide whether or not to invest in a firm.

He is a believer in the value investing paradigm (whose patron saint is Warren Buffet) and has analyzed every deal Berkshire Hathaway has made, both good and poor, throughout his career. This, along with his personal triumphs and failures, prompted him to compile a list of dozens of potential investing blunders.

Then he devised a checklist to protect himself from all of them. They ensure that they have all of the necessary information at every stage of the investment process to make the best possible decision.

Because of the checklists, all three of the investors Gawande spoke with discovered that their returns were greater, and they committed fewer mistakes.

So, why aren't more investors using this strategy?

He looked at how those people make investing decisions and discovered six different methods.

Smart then followed the VCs' progress over time. The Airline Captain method, unsurprisingly, was the obvious winner. They had a median return of 80% on their investments, whereas the other groups received 35% or less.

According to his research, despite the apparent benefits of the Airline Captain method, just one out of every eight VCs adopted it. All of this despite Smart's conclusions being published in the best-selling book Who.

Let's look at why checklists work and why, despite their effectiveness, most of us refuse to utilize them.

Checklists provide fixes to two issues. To begin with, it aids us in remembering the proper order of steps to accomplish a critical activity, as we've already mentioned.

It's especially useful in "all-or-nothing" procedures because failing to complete one of the phases implies you're better off not trying at all. This includes the measures for preventing central line infections and an airline pilot's pre-flight checklist.

Second, even if we recall the steps, it stops us from lulling ourselves into bypassing them.

Checklists serve to remind us of the bare minimum of steps to take and to make them apparent. They not only allow us to double-check that we've done things correctly, but they also teach a higher-performance discipline.

The aviation business is one industry that uses checklists for almost everything. As Gawande points out, Dan Boorman has more experience putting theory into practice than nearly anybody on the globe. He is an experienced pilot who has spent two decades working for Boeing on checklists and flight deck controls.

Each Boeing plane's pilot manual is roughly 200 pages long and has a slew of checklists.

There are "standard" checklists for things they undertake daily, such as how they check the engines and what they do before taxiing to the airport.

Then there are the non-standard checklists, which cover every imaginable emergency circumstance a pilot may face, from a dead radio to a crippled copilot.

Every year, Boeing publishes over a hundred new or amended checklists, and they've learned a thing or two about what constitutes a successful checklist over the years. Boorman describes the distinction this way.

The following are examples of poor checklists:

Why We Don't Use Them

It's now obvious that checklists work, and we've developed a method for producing them. The main problem with them is that people don't utilize them despite working effectively.

One possible explanation is that our culture glorifies "heroes." People who appear to have superhuman abilities to achieve outcomes that most of us can only imagine.

Captain Chelsey Sullenberger III, who landed a passenger aircraft in the Hudson River in New York City after being struck by a flock of geese shortly after takeoff, is one of those heroes in recent memory.

Sully was hailed as a hero in the news (and he was). But the fact was that he rescued all passengers on that aircraft. And he did it by using his training to go through the checklists.

Perhaps if we concentrated more on why our heroes can achieve extraordinary achievements, we would lay less emphasis on their personal skills and abilities and more on the systems and methods they employ to get exceptional results.

It's self-evident that employing checklists will improve your performance in nearly every aspect of your business. In fact, the more critical the work, the more useful a checklist will be.