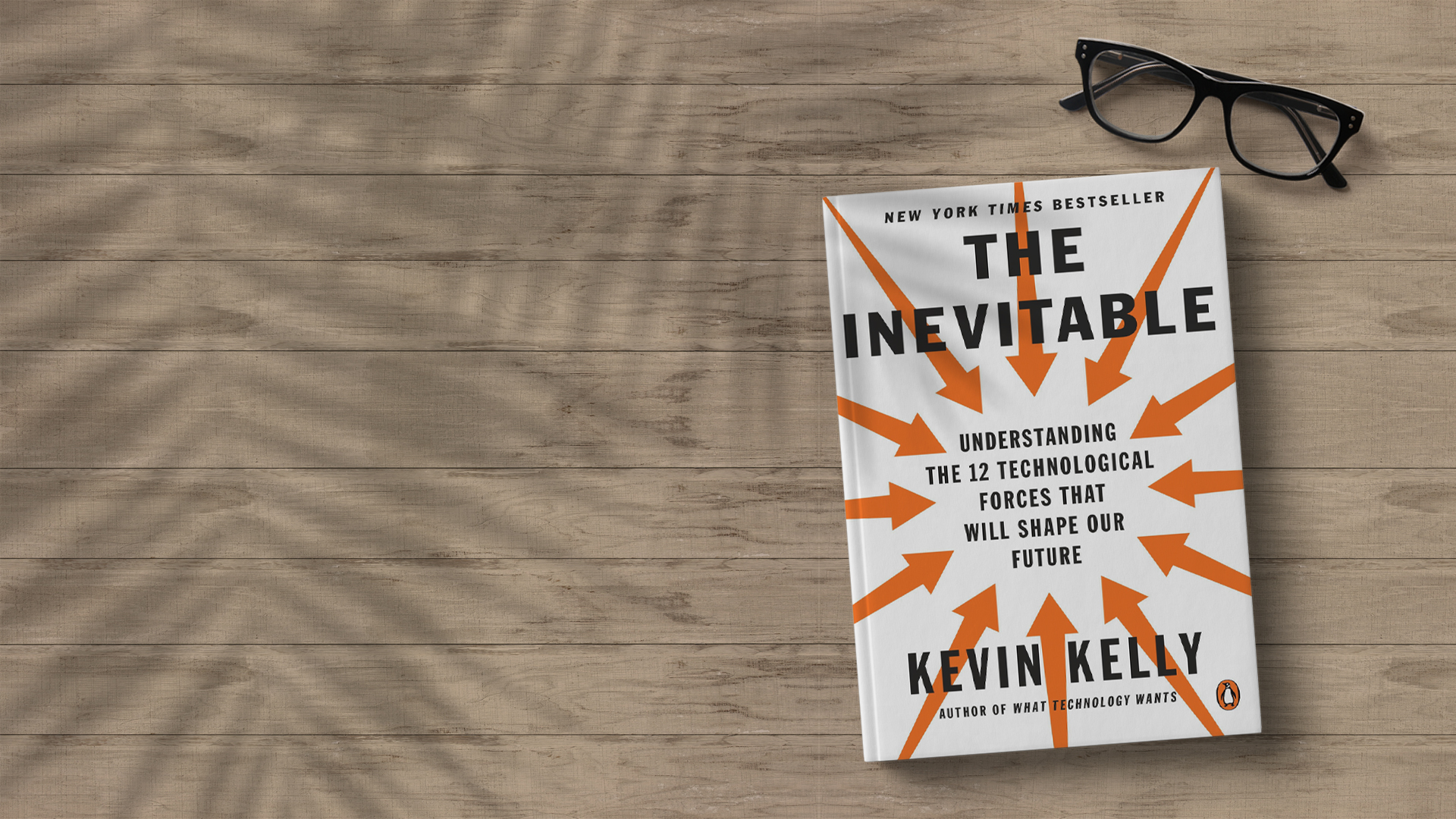 It's impossible to avoid change. Kevin Kelly, the author, identifies 12 "inevitable" influences that will determine our future. He refers to entrenched factors like technology rather than in the structure of society when he says "inevitable."

He picked twelve verbs that imply ongoing behaviors that will inevitably continue for at least another three decades.

Each of the twelve will be described in this overview.

Upgrading has become a form of technological hygiene: you do it regularly to keep your gadgets healthy. The robots gradually alter their appearance - they are "becoming."

Life in the future will be a never-ending succession of technological advancements. Everyone will be a beginner in this "becoming" period.

We will be complete novices because the most essential technologies that will rule the future have yet to be conceived. They'll also be in a perpetual cycle of upgrades. Thus users will be in a constant loop of reverting to beginner status. We won't have enough time to perfect anything before the next release.

Rather than utopia or dystopia, technology is leading us to protopia. It is a condition of being rather than a destination. It's a procedure. It's a gradual improvement or a small step forward.

The future will be the result of a transformation. The previous thirty years of the invention have put us up for success, but the future will be different. The things we create will inevitably transform into something else. Today's frontier is wide open.

Artificial intelligence will revolutionize everything since it is cheap, powerful, and pervasive. Kelly predicts that, in addition to quintillions of online transistors and civilization's continual feedback loops, AIs will be connected to each human mind one day.

When it comes out, we'll be able to access it from any digital screen on the planet. It will be difficult to explain exactly what it is since it will be combined with human intellect.

Because it is already present, cognition is unavoidable. Watson, an AI which appeared on Jeopardy!, is an electrical genius. In the year 2011, He's grown in size and intelligence since then. He can now almost always correctly identify illnesses based on symptoms.

Watson-like services are being launched by a slew of other firms. Google purchases DeepMind, an AI startup that has built an AI that can teach itself how to play video games.

Everything will be AI-enabled shortly. AIs will compose hours of individualized music, and clothing will tell the washing machine how to be washed. Moreover, patients will be followed and given daily personalized therapies.

Artificial intelligence has arrived because of three major breakthroughs: inexpensive parallel processing, massive data, and improved algorithms. AI will only improve in the future.

AI will eventually eliminate a portion of our jobs. Still, it will liberate us from discovering work that we never considered necessary. They will allow us to concentrate on being more human than we were before.

The internet is the largest copy machine on the planet. It can – and does – replicate every character, idea, and message millions of times. The immediate replication of data, ideas, and media is one of the most important aspects of the twenty-first-century economy. The circulation of copies is unavoidable.

Our focus has shifted from tangible items to immaterial flows. We look for services that are constantly updated and flexible. Everything should take place in real-time. When we deposit money in the bank, we expect it to appear right away. Everything must flow to work in real-time.

Because copies are so common, they lose their value. Things that can't be duplicated are precious and rare.

To be successful, you must market generative values, which cannot be copied. Immediacy, personalization, interpretation, authenticity and accessibility, embodiment, and discoverability are examples of generative values that must be produced at the moment of the transaction.

These can't be duplicated, cloned, stored, or warehoused in any way. Generous attributes increase the worth of free copies and, as a result, can be sold.

More than five billion digital screens now illuminate our lives. Manufacturers of digital displays will generate 3.8 billion new screens every year. The screen is the way of the future.

Screen culture moves at the speed of light, and it's as fluid and open-ended as a Wikipedia page. Screens are always on, displaying something new for us to read or look at.

Reading becomes much more social when screens are used as books. I may highlight and share my favorite parts of a book, and I'll soon be able to link and tag books and readers to make reading a networked experience.

Screening is an unavoidable future force.

Possession isn't as significant in today's environment as it previously was. And now, more than ever, access is critical. This long-term shift away from owning and toward accessibility is being accelerated by five major technological advancements.

Dematerialization refers to the use of fewer materials in the production of goods. Some things are completely devoid of materials (such as apps). There has been a significant shift from "purchased ownership" to "subscription-based access."

Real-Time On-Demand: Access is a method of delivering new information virtually instantly. Rather than phoning a cab, giving them your address, waiting for it, and fiddling with your wallet to pay, you can now do everything with Uber in real-time. Work is decentralized as a result of it.

Decentralization has been made possible by technological advancements. The more our society decentralizes, the more accessibility becomes critical to maintaining flexible relationships.

Platform Synergy: A platform is a base built by one company on which other companies develop goods and services. There is now a web of interconnected platforms.

Clouds: A cloud is a collection of millions of computers that have been intertwined to form a single huge computer. Because its core is dispersed over numerous processors in a highly redundant manner, a cloud is more powerful than a typical supercomputer. Using the cloud, you can now access anything from anywhere.

The new standard is to share and sample stuff. Collaboration will become the norm in the future. We're not just revealing more about ourselves (on sites like Facebook and Instagram). Still, we're also collaborating on a larger aim.

Wikipedia is managed with the support of volunteers worldwide who volunteer their time, knowledge, and experience to help build something.

The firms that have found out how to harness features of sharing that are currently unnoticed and undervalued will be the largest, quickest growing, and most profitable.

There are millions of music, books, articles, movies, TV series, and other items available for human consumption on our globe. To assist us in deciding what to take in, we use a filtering system.

What appears on your newsfeed is filtered by Facebook. Based on your purchase history, Amazon selects and presents you with things they believe you'll enjoy. The search results you see are filtered by Google.

Beyond media, filtering techniques will be expanded to other decentralized systems. A filter concentrates both material and attention. Without training, the only worthwhile resource we generate is our attention.

Because we can't stop creating new things, additional filtering is unavoidable. One of the latest creations we'll come up with is a new way to filter and customize content.

Modern technologies are a mash-up of older technologies that have been remixed and reorganized. We're in the midst of a time of fruitful remixing.

And the more new technologies that are released, the more conceivable combinations become. Remixing allows for exponential expansion.

Every valuable invention will ultimately and inevitably be converted into something else. The most influential cultural works and mediums will be the ones that have been remixed the most.

We're giving our gadgets eyes, ears, and motion sensors so that we can interact with them. They will not only be aware that we are present, but they will also be aware of who is present and whether or not that person is in a good mood.

All devices will communicate in the future. It will be deemed broken if it does not interact. More sensations, closeness, and immersion will be available as a result of the interaction expansion.

The future of technology is increasingly dependent on the invention of new interactions. Anything that isn't highly interactive will become obsolete over the next 30 years.

We already live in a tracking era. We measure our nutrition, fitness, sleep habits, moods, blood variables, genes, and location in measurable units. It won't be long until tracking everything becomes the norm.

Humans have a natural aversion to numbers. Self-tracking will, in the long run, go much beyond statistics. One day, continuous streams of data will flow from our body senses.

There will be continuous monitoring of vital body measurements, an interactive, extended memory of people you meet, conversations you have, places you visit, and events you attend.

There'll be a complete passive record of everything you have ever made, written, or said, and a method of organizing, influencing, and "reading" your life.

This knowledge collection might aid others' work and magnify social interactions to the extent that this life-log is shared. Medical breakthroughs might be helped by health records.

In 2020, we generated 54 billion sensors. In the following decade, this network of sensors will produce another 300 zillion bytes of data. We'll be stumped by the possibilities that a new level of tracking ourselves might open up.

What we once thought was unthinkable is now taking place all around us. The bulk of the most incredible innovations are yet to be created. As a result, we should anticipate certain unexpected "impossible" events to occur.

Every minute, a new implausible occurrence gets posted to the internet. That improbable event is only one of the hundreds of exceptional circumstances we will witness or hear about today. Because certainty is no longer as definite as it once was, questioning is unavoidable.

Question-generating technologies will be valued more highly. Question generators will be viewed as the engines that produce new areas, industries, brands, opportunities, even continents for our restless humanity to investigate.

Historians will look back on this period as the start of a massive movement thousands of years from now. A movement aimed at imbuing inanimate things with intelligence and connecting billions of individual brains into a single supermind.

It's difficult to comprehend the scope of what we've become. However, it is taking place. The transition to a new era has already begun. We're getting closer to tying all humans and robots together in a worldwide matrix.

This procedure is clearly headed in the right path. We shall see more flowing, sharing, monitoring, accessing, engaging, screening, screening, remixing, filtering, cognifying, questioning, and becoming in the next 30 years.

And this is just the beginning.