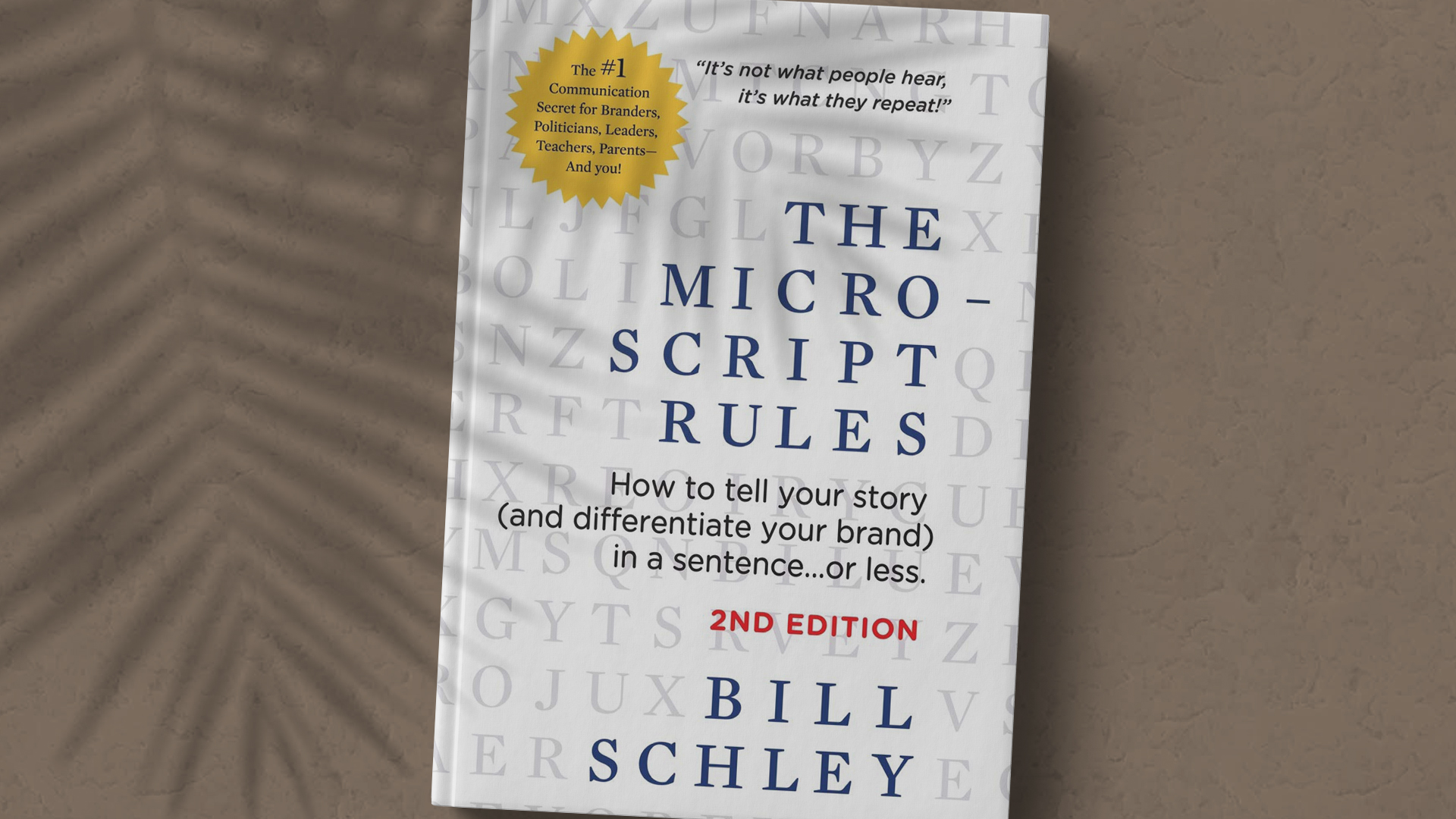 It's not often that a book title can convey everything, but if there was ever one that could, it's this one.

It's not what individuals hear, according to the Micro-Script. It's the same thing they say again and over...

At the beginnings of the 2008 recession, novelist Bill Schley was given a confidential email, as he relates. It was designed for Sequoia Capital's portfolio firms, and it caused widespread concern in Silicon Valley.

"Forget about getting ahead; we're talking survive. All assumptions prior to today are wrong. Do it right, and you may be able to capitalize on this downturn and live... Nail your marketing message now. Measure everything and cut what's not working. A key takeaway: You can't quit marketing and selling and stay in business. But if you keep spending fantasy bucks and don't deliver an ROI, you're toast."

Of course, regardless of the economy, nailing your marketing pitch is sound advice.

I've never really used testimonials from jacket covers before in our synopses. Still, these two - by great marketing strategists Jack Trout and Al Ries - are so fantastic in explaining what Micro-Scripts is all about that I had to use them.

"The Micro-Script Rules is dead on—it's how to verbalize a point of difference. And without a one, you better have a low price."

—Jack Trout, co-author of the bestselling books Positioning: The Battle for Your Mind and Repositioning: Marketing in a Time of Change, Crisis, and Competition

"The missing ingredient in most marketing is memorability. Bill Schley has developed a list of Micro-Script rules that solve that problem. Well-organized and well-written."

—Al Ries, co-author of the best-selling book Positioning: The Battle for Your Mind and War in the Boardroom

Let's get this ball rolling.

A Micro-Script is a message that individuals like to repeat to teach or amaze others, the usual word for word. It will frequently use metaphors, vivid visuals, or rhythmic noises to create a mental picture.

As Schley points out, our ability to cut through the nonsense, locate the essence of the topic, make it our strategy, and then stick to it is directly proportional to our ability to communicate effectively.

When it comes to Micro-Scripts, there are four important guidelines to remember.

Rule #1: It's What They Repeat

Frank Luntz, the Republican wordsmith who taught the GOP to use phrases like "No child left behind" instead of "The Mandatory Punitive School Testing Law," famously said:

"It's not what you say; it's what people hear."

Schley goes even further, claiming that what matters most is not what people hear but what they want to repeat once they've listened to you.

This is a significant difference. You've won the jackpot if you can produce a marketing message that accurately conveys your Dominant Selling Idea (more on that in a moment) and that people want to repeat.

This brings us to the next rule.

Rule #2: Every Screen's a Word of Mouth Machine

Word of mouth was important in prehistoric days. It had a well-deserved hiatus when radio and television took over and is now making a comeback with social media to control the globe once more.

The holy grail of advertising is reducing your message to a basic, repeatable message that people disseminate to their networks.

Rule #3: What They Want to Repeat Are Micro-Scripts

If you've ever visited Las Vegas, put your hand up right now. Keep your hand up if someone in your party discreetly grinned at you and stated, "Look, what happens in Vegas, stays in Vegas?"

You may now place your hand on the table. Simply search for that term on your favorite social media network. You'll see that it's still alive and well, promoting Las Vegas as the place to go when you want to get away from it all and set yourself free.

As Schley points out, a Dominant Selling Idea is your one, greatest, distinctive feature. It's the one most unique, valuable, and own-able advantage that you can proclaim that others don't. It is brand positioning at its most penetrating, detailed level.

The safest vehicle. The toothpaste recommended by dentists. The beer of the hardworking man. The quickest headache relief.

A Dominant Selling Idea and its Micro-Script equivalent are shown below.

Why This Is Important

5,000 words will always be beaten by the proper five words.

Humans do not consume your marketing message in the way you believe. You deliver them to a boardroom full of people who are listening intently and obsessing over every word.

Your target market, on the other hand, could care less. They are not just blasted with thousands of other texts every day, but they are also in a hurry and perhaps stressed out about something in their life.

People's built-in biases take control when circumstances grow heated and overpowering. We make hasty decisions based on the tiniest bit of information. We strive to get to the heart of the problem, even if we're a mile off the mark.

To put it another way, we have a predisposition against overly difficult things. It's why, even though they were initially proclaimed decades ago, statements like "What happens in Vegas stays in Vegas," "If the glove doesn't fit, you must acquit," and "Guns don't kill people, people kill people," are still used today.

Remember, the more sayable the thought, the more playable it is.

Here are some additional ideas to get your imagination going.

"It's made from sugar, so it tastes like sugar..."

Splenda leveraged its Micro-Script to soar to a 50% market share within three years of its introduction. The entire "made from sugar" notion was a stretch, and the scientist who found Splenda by mistake was working on a new pesticide at the time.

Even a successful lawsuit by their opponents prohibiting them from claiming the sugar claim had no effect on their meteoric ascent to prominence.

Michael Pollan, a man who most likely despises Splenda, penned the best-selling book In Defense of Food. It had 244 pages, but the first seven words on the first page were:

Pollen had to say sorry for giving away the whole book in the first seven words, and he needed to come up with a method to fill the remaining 200 pages. Now that's how you sum up a book.

Although the book was released in 2008, if you search for that precise line on your favorite social media platform, you'll find it mentioned many times per day.

Here's another book synopsis to keep with the subject. When a Talmudic expert was asked to interpret the Bible, he replied that he couldn't. He said he could sum it up in a single sentence:

"Do unto others as you'd have others do to you."

He described the rest as "commentary."

And if a New York Times best-selling book and the entire Bible can be reduced to a single, repeated word that captures the essence of the concept, your product, service, or organization can, too.

It's important to note that this is a Dominant Selling Idea, not a group of ideas. Since all excellent value propositions contain a single promise, this is the case. There aren't two, three, or twenty.

You excel at one trait or advantage that is most significant to the goal. The most secure tire. The human with the fastest reaction time. The only shoes that allow you to breathe.

But here's the thing: if you offer someone a data dump, they'll just pick out whichever notion they think is most relevant to them. As a result, make it the one thing you want them to take away with them.

Here are a few examples of contemporary brands that excel in DSIs:

But, what you were probably thinking was the Micro-Scripts that went with those DSIs:

The five components that those brands utilize to make their offer a Dominant Selling Idea are as follows:

It informs others that you are:

The 4-Step Process to Find Your Micro-Scripts

It's good to begin mining for Micro-Script gold now that you've obtained your Dominant Selling Idea.

Here's how to get there in four easy steps.

The basics are usually the key to everything, and Micro-Scripts are no exception.

Go out and speak with as many stakeholders as possible. Request that they describe your key concept in their own terms.

As Schley puts it, you'll be surprised at how often someone you least anticipate delivers you the golden nugget you've been hunting for, without you recognizing it.

Make a list of all the questions you want to ask. Make sure you take plenty of notes.

No, you should not utilize someone else's Micro-Script for your own business.

To persuade prospects to become clients, you should follow your best salespeople (or those who offer something comparable to what you sell) and listen to exactly what they say.

Make sure you take extensive, word-for-word notes once more.

Write down some anecdotes about how your product or service improves the lives of those who use it now that you've been inspired.

Use that tale to solidify other ideas, which will lead to more stories and more ideas until you uncover the campaign's headline in the text.

Ted Bates (the folks who established the USP), Schley's employer at the advertising firm, once told him:

"The best headline's always in the copy."

This is the most straightforward phase. It's time to pull out the Micro-Scripts that are already there if you've done an excellent job of laying down the plot and finding some nice lines.

Of course, keep in mind that they are only candidates unless they can be proven to be reproducible.

You'll know you've made it to the end of the race when folks start reciting your Micro-Script (and it conveys your Dominant Selling Idea).

Lastly, let's look at some proven templates for writing your own Micro-Script.

The most common pattern is a basic logic equation, which can take several forms.

Some instances are as follows:

Here are some more examples:

This is a one-of-a-kind, smart, and funny word combination that is easy to remember and pronounce. They nearly often feature a nice rhyme or rhythm.

Some instances are as follows:

Ultimately, nothing beats a Micro-Script that encapsulates the entire plot.

On a wager that he couldn't explain a tale in six words, Ernest Hemingway allegedly penned the following:

To create headlines that tell a narrative, you don't have to be Hemingway. Take the following headline, widely regarded as the finest in copywriting history:

"They laughed when I sat down at the piano, but when I started to play..."

As you test your own Micro-Scripts, you'll undoubtedly come upon one that works.

It's not what individuals hear, according to the Micro-Script. It's something they keep repeating.