Book Summary : The Power of Habit 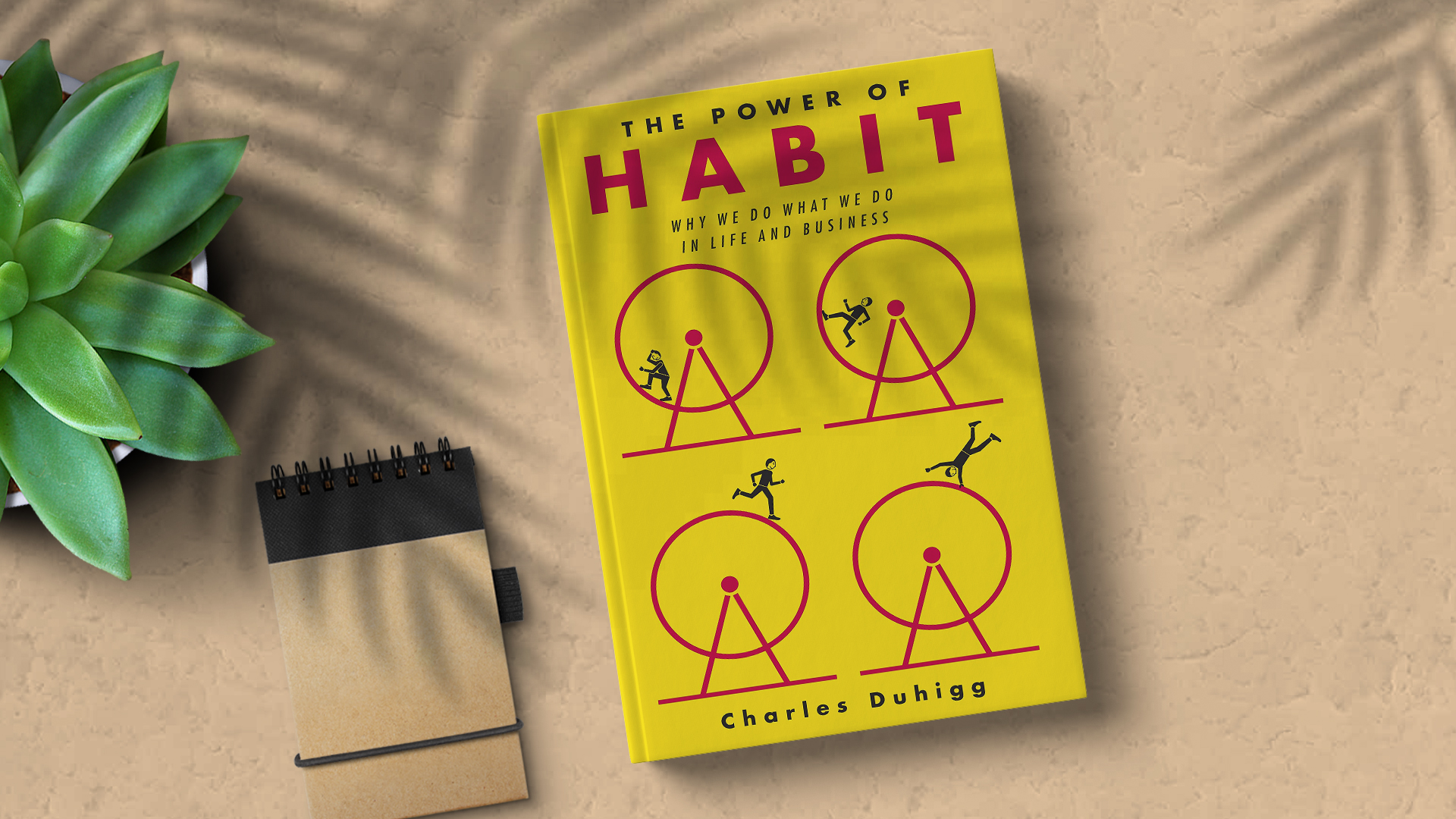 I'm going to take a chance and suppose that you'd like to improve certain aspects of your business and life. Perhaps you'd like to start eating better, exercising, or figuring out how to manage your inbox.

Your habits are one of the finest aspects to search for new and permanent changes in your life. You'll be able to modify your behaviors once you grasp how they function.

The Power of Habit explains how to accomplish precisely that. For the following 12 minutes, join us as we look at how habits are created, alter them, and maintain the change.

The Habit Loop - How Habits Work

Our behaviors form the foundation of our existence. When you look back on your day, it may appear that we were making decisions all day. However, according to a Duke University study released in 2006, our habits are responsible for up to 40% of our daily behaviors.

"A habit, from the standpoint of psychology, [as] a more or less fixed way of thinking, willing, or feeling acquired through previous repetition of a mental experience." according to the American Journal of Psychology (1903).

The habit loop, as described by Duhigg, consists of three steps:

This cycle gets increasingly automatic over time until the trigger and reward become inextricably linked, and you have formed a habit.

MIT researchers used rats in studies to help explain how this happens scientifically. Rats were placed in a T-shaped maze with a chocolate station at one end. They were hidden behind a barrier that slid open with a loud click. The rat's brain was bursting with activity as it explored the maze, searching for the chocolate it could smell.

The rats learned to traverse the labyrinth by repeating the tests hundreds of times until they could go straight to the chocolate. However, as individuals became more proficient at traversing the maze, their brain waves revealed that they were thinking less and less.

What is the reason behind this?

According to scientists, this is due to the brain's continual search for methods to conserve energy, an evolutionary benefit.

We can dedicate more mental energy to other things if we think less about basic activities like walking and selecting what to have for lunch.

The Craving Brain – How to Create New Habits

Now that we understand how habits form, we can look into why signals and incentives motivate people to behave in certain ways. To comprehend this, we must first learn the science of desires.

Inside a lab at the University of Cambridge, the most notable work in this field was done on monkeys. Wolfram Schultz (who, in my opinion, gets the award for neuroscientist with the funniest name) devised an experiment that revealed how signals and rewards are related.

A monkey sat before a computer monitor. Its duty was to press a lever whenever different colored objects showed on the screen.

A drop of blackberry juice would trickle down a tube and into the monkey's mouth if the animal pressed the lever when a form appeared, which the monkey considered delightful. A surge in the monkey's brain activity occurred whenever he received the reward, indicating happiness.

Surprisingly, as the experiment progressed, the monkey's brain activity began to shift. Instead of spiking when he received the reward, it began to spike as soon as he saw the shapes on the screen.

Finally, they altered the experiment so that the prize was not given when he pressed the lever. When this happened, the brain pattern that appeared was one of want and dissatisfaction. The incentive was to produce a desire for the reward.

Habits, in essence, generate neural desires over which we have little control.

This is how new habits are formed, according to Duhigg: by combining a trigger, a routine, and a reward, and then nurturing a desire that drives the loop.

Here's an amusing example to illustrate the idea.

Brushing your teeth wasn't common practice in the early 1900s. When Pepsodent recruited him to sell more toothpaste, Claude Hopkins, one of the first advertising experts and author of Scientific Advertising, viewed this as an opportunity.

He concentrated on developing a new habit loop that looked like this:

This is the cue: I'm aware of a layer on my teeth. Brushing my teeth is part of my daily routine. A lovely, dazzling grin as a reward.

Pepsodent sales skyrocketed after a campaign focusing on this habit loop was launched. Before Pepsodent, only around 7% of Americans cleaned their teeth. That number rose to 65% in the ten years after the Pepsodent campaign's introduction.

Hopkins, however, was unaware of one crucial fact: toothpaste makers had been using this strategy for years without success. Pepsodent's popularity was due to mint oil and citric acid, which provided teeth a tingling sensation after use.

Hopkins had assisted in creating a habit loop in which clients developed a need for tingling teeth. As a result, they continued to purchase Pepsodent.

The Golden Rule of Habit Change – Why Transformation Occurs

Now that we know how habits operate and form, we can learn how to convert harmful practices into healthy ones.

As Duhigg points out, breaking old patterns is extremely difficult. That is why, to modify it, we must rely on the habit loop that currently exists.

Simply put, the strategy for developing a new habit is to retain the previous signal and reward while introducing a new pattern into the loop.

To begin, we must first recognize the triggers that cause us to fall back into previous habits. Then we need to figure out what kind of incentives we'll obtain once we've completed the routine.

Nathan Azrin, a habit reversal expert, explains it like this:

"It seems ridiculously simple, but once you're aware of how your habit works, once you recognize the cues and rewards, you're halfway to changing it."

Alcoholics Anonymous, it turns out, accomplishes just that for alcoholics. According to Ulf Mueller, a German neurologist who has examined brain activity in alcoholics, people drink alcohol for a variety of reasons.

Although alcohol has a hedonistic component, it is also used by those who wish to forget something or find respite from difficult conditions.

AA provides alcoholics with some of the same benefits they would experience in a bar - escape, diversion, and catharsis - but without the hangovers and regrets.

They force people to establish a new pattern for what they do each night instead of drinking by making them commit to attending meetings 90 times in their first 90 days in AA. The cues and incentives are the same; the routine is different.

AA is a big machine for changing habit loops. It gives a technique for tackling the behaviors that accompany alcohol use.

Keystone Habits – Which Habits Matter Most

Now that we understand how habits function and eventually develop into cravings, we can investigate if some behaviors are more important than others.

These are what Duhigg refers to as "keystone habits." They're the ones that, once established, have a domino effect on the rest of your life, causing additional excellent habits to emerge organically.

People who make it a habit to exercise, for example, eat healthier and are more productive at work. They smoke less and have more patience with those around them. They are less likely to use credit cards and are less anxious. Exercising is clearly a foundational habit for many people.

The National Institutes of Health revealed a novel strategy for weight loss in another research. They assembled a group of 1600 obese people and asked them to keep track of everything they ate for at least one week.

It wasn't easy at first. It eventually became a habit for them, and they began to notice trends in their diaries that they hadn't expected. Some folks discovered they were snacking aimlessly in the middle of the day and started keeping a piece of fruit on their desk.

Others began to write down their supper plans in the diary and ate more nutritious foods when it came time for dinner.

Food diaries turned out to be a foundational habit for a slew of other healthy behaviors.

After six months, people who kept daily meal records dropped twice as much weight as the rest of the group.

Finding little victories is the key to developing a keystone habit in your life. Small victories foster the growth of other patterns by establishing new structures and cultivating environments where change is contagious.

Starbucks and The Habit of Success – When Willpower Becomes Automatic

Starbucks had over 137,000 workers, and over a million alumni at the time this book was written.

Starbucks workers spend at least fifty hours in Starbucks classes throughout their first year, making it one of the country's largest educators. A strong emphasis on a crucial habit: willpower, is at the heart of that instruction.

Willpower is the ability to put off short-term gratification to achieve long-term objectives. Many studies have shown that kids with strong willpower obtain better grades, acquire better jobs, and earn more money.

Willpower was formerly thought to be a talent that could be taught by scientists and researchers. However, as time went on, it came to be seen as a resource.

The ability to resist temptation depends on your willpower, which is a habit you can cultivate. As Mark Muraven, a psychology professor at Ball State University, notes:

"There have been more than two hundred studies on this idea since then, and they've all found the same thing. Willpower isn't just a skill. It's a muscle, like the muscles in your arms or legs, and it gets tired as it works harder, so there's less power left over for other things."

Starbucks recognizes that instilling willpower in its staff is critical. That's because stress may easily overwhelm their capacity to offer the level of service that their customers have grown to expect.

They understood that when their baristas' willpower was low, they were more likely to fail at providing exceptional customer service. As a result, they outlined procedures for their workers to follow when they faced snags.

They were specifically taught how to react to various indicators, such as a shouting client or a large queue at the cash register. They were then instructed to search for specific rewards in each situation, such as a thankful client or a man's admiration.

Here's an illustration of how to handle a dissatisfied customer, which they refer to as the LATTE method:

Make your own willpower habit loops by deciding on behavior in advance and then sticking to it when the circumstance arises.

Habits are quite strong. If you understand them and know what to do to generate new ones and transform bad ones into good ones, they may be a positive force in your life.

Good luck with your habit-finding!