Book Summary: The Thank You Economy 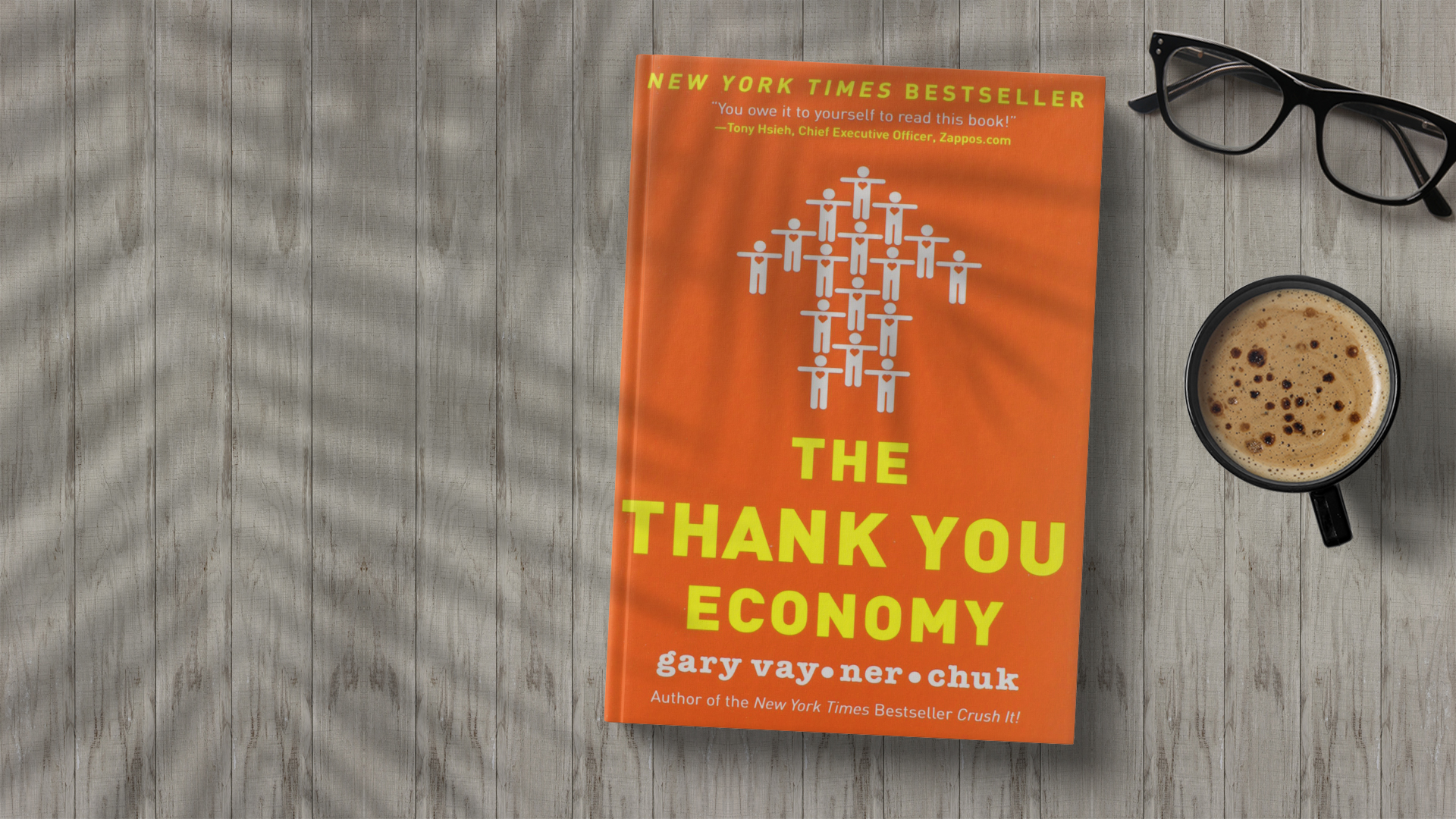 Suddenly, technology is tying everything and everyone together.

The fact that the media is now democratized has gotten a lot of attention. When it comes to generating and disseminating media, every firm globally is on an equal footing.

The most astute among us, such as Gary Vaynerchuk, see that although these technologies enable us to contact more people than we ever imagined possible, they drive a rewrite of business norms.

We are not, however, entering some futuristic new universe. We're on our way to the Thank You Economy, which has its origins in small-town America.

The Way It Was

It was a different world fifty years ago when it came to running a business. While there's still a lot of work to be done, it was moving at a slower rate. To prosper, you have to prioritize connections above transactions.

It was extremely likely that if you operated a bakery at the time, you lived in the same area as your clients. Even before they stepped through the door, you probably knew their children's names and what they were going to order.

The Thank You Economy was born. If you were the baker, you would provide a Baker's Dozen to your customers by tossing one extra croissant into the bag without making a big show out of it.

The goal was to build genuine relationships with your clients and provide exceptional service. If you have a poor encounter, the whole community could know about it.

The one and the only way to grow a firm was to provide excellent service to consumers. Your company's success or failure would be determined by what your consumers shared with the rest of the community.

However, sometimes amid the post-World War II suburban expansion, we lost our path. We no longer had close links to our clients as more individuals drove their vehicles to work and acquire their things. Larger stores began to open, making it even more difficult to develop personal ties with all of your consumers.

How can we know we've gone astray? We now place firms that provide excellent customer service on a pedestal and publish books about them. In the old Thank You Economy, service like that offered by the Four Seasons or Zappos was standard. They're about to become incredibly competitive again in the next three to five years.

Meanwhile, the firms and organizations who understand this will win hearts, minds, and overall profit. We'll skip over the debates about whether or not social networking will truly impact the corporate sector in this way. Yes, it is. If you don't hop on board, you'll be left behind.

The Blueprint for Being Left Behind

Social media has spawned the Thank You Economy, whether we want it or not. The two are inextricably linked.

Unfortunately, many business owners look around and try to come up with as many excuses as possible to avoid taking their company ahead. Here are some comments you may make if you want to bury your head in the sand and hope that this revolution will not influence your business.

There is no return on investment. This one has been hotly discussed for a long time. Many businesses indeed struggle to justify the ROI of social media over short periods, such as months or quarters. Investors and the stock market are looking for immediate rewards.

However, the true return on investment in this medium occurs over time when you develop brand supporters. According to one survey, clients are ready to spend between 5% and 25% extra for better customer service. Hundreds of additional research have found that word-of-mouth advertising is the most profitable type of advertising.

Both of these scenarios benefit greatly from the use of social media.

The measurements aren't trustworthy. There is a lot of debate over the usefulness of analytics when it comes to social media. But, we also know that data on television watchers are subject to the same kind of bias and have long been a less-than-ideal means to gauge consumer involvement. Don't be caught in this trap.

Because social media is such a worldwide phenomenon, waiting for it to develop is a sure way to die. Inquire of Blockbuster and Borders about their experiences while waiting for the Internet to grow.

Another trend that will fade away is social media. Incorrect. Turn on the news to observe how governments all around the world are collapsing like dominoes. You can credit social media for a significant part of that. If it can bring down tyrants, it can definitely bring down your industry's standing.

We must keep our messaging under control. You were never actually in command of the message; it simply appeared so.

Now that your consumers and the marketplace can "talk back," we're beginning to recognize that our elevator pitches, and the countless hours we spent developing them, were a waste of time. Strangely, as I sit here writing this, I overhear two executives discussing what they would do with "that tweeter and blogger."

We just do not have the resources to react to everyone. Sadly for you, you won't be able to avoid it.

According to the firms that are establishing the brands that MBA students will learn from in the next 10-15 years, excellent customer service is now their greatest marketing. Take some money from a low-performing bucket somewhere in the firm and give it to your customer support team to use on social media.

There are various reasons why you might avoid social media, but they all lead to the same conclusion. This transformation is far more significant than the technologies and social networks that you may have heard about in the media. This is a shift in the way you conduct business.

The Way to Win #1: Instilling the Right Culture

Although Vaynerchuk established his firm and personal brand on entertaining and informative internet video, he'll be the first to tell you that this isn't the Thank You Economy's secret sauce. The only way to win is to care more than the competitors.

This isn't something you can order in an email or a corporate address and then sit back and watch it all fall into place. If you want your company to be a lean, mean, customer-focused machine, you'll need to apply six basic elements.

Let's start with yourself. How can you expect your staff to fight for your consumers if you don't feel compelled to do so?

It takes a lot of effort to succeed in the Thank You Economy. It's doubtful that you'll encourage others to do the same if you don't have a love for your consumers running through your veins.

Give it your all. This does not imply that you must take a large sum of money from another department's budget to start a new social media department at your firm. However, as Gary points out, committing one's mind to a movement might take only a moment.

Make the commitment as though the ships are on fire and there is no going back.

Lead the way. As you've probably heard, you're on stage every day as a leader. Your workers are more likely to believe your deeds than your words. Make it a point to do something that will make your company sit up and pay attention.

If you're looking for motivation, go no farther than John Pepper, the CEO of Boloco, a Boston-based burrito business. Pepper makes it a point to personally answer consumer emails. What's more, he does it without using business jargon and from the heart. When's the last time you replied to an email from a customer?

Make an investment in your staff. It's been said that you must love yourself first before you can love others. The same is true for your group. You can't expect them to provide exceptional customer service if they aren't content.

The good news is that most individuals want to be recognized for their hard work rather than for additional money, which is mostly free to the organization. Reward those that share your enthusiasm for the customer and are willing to take the initiative to improve the customer experience.

Have faith in your team. This one is straightforward. Most businesses establish process after process to guarantee that untrustworthy personnel do not make mistakes that cost them money or damage their brand.

Netflix has a unique perspective on the method it has established: the company's regulations are designed to empower great people to do more. Zappos takes this similar idea to its logical conclusion by enabling contact center staff to stay on the phone with customers for as long as it takes to make them happy.

Do you have any restrictions that prevent your team from utilizing their best judgment to do what's best for the customer? If that's the case, get rid of them. If you're afraid of doing that, maybe you have the wrong people.

Be true to yourself. This phrase has become a cliche in recent years, yet it encapsulates a very significant point. Your clients and workers will pick up on the BS right away if your heart isn't in it.

Establish these foundational elements in your organization, and you'll be ready for the Thank You Economy.

The Way to Win #2: Using Social and Traditional Media Together

Vaynerchuk is among the few guys in the social media world. They admit that social media and traditional media may really complement one another.

In fact, Vaynerchuk employed conventional media in New York City to promote his most recent book, Crush It. The best approach to doing this successfully is to leverage offline media to start and keep a conversation going online.

Old Spice and their "The Man Your Man Could Smell Like" campaign was one of the businesses that did a fantastic job of generating interaction in social media inspired by traditional media.

Old Spice and its agency used a huge number of bespoke films to interact with friends and followers on social media for a short period. They didn't continue the dialogue online after this first push. They hadn't posted a response to their Twitter account in months.

If you want to make the most of mainstream media, you need to turn it into a never-ending game of ping pong. It would probably be beneficial to begin thinking in terms of movements rather than campaigns. A campaign has a beginning and an end date. Movements, however, do not.

Suppose you like being prepared for the impending business revolution. In that case, you must go beyond the available social media tools and be ready to change how you do business.

Prepare your business for the Thank You Economy, or you might end up on the wrong side of history.