Book Summary: They Ask, You Answer 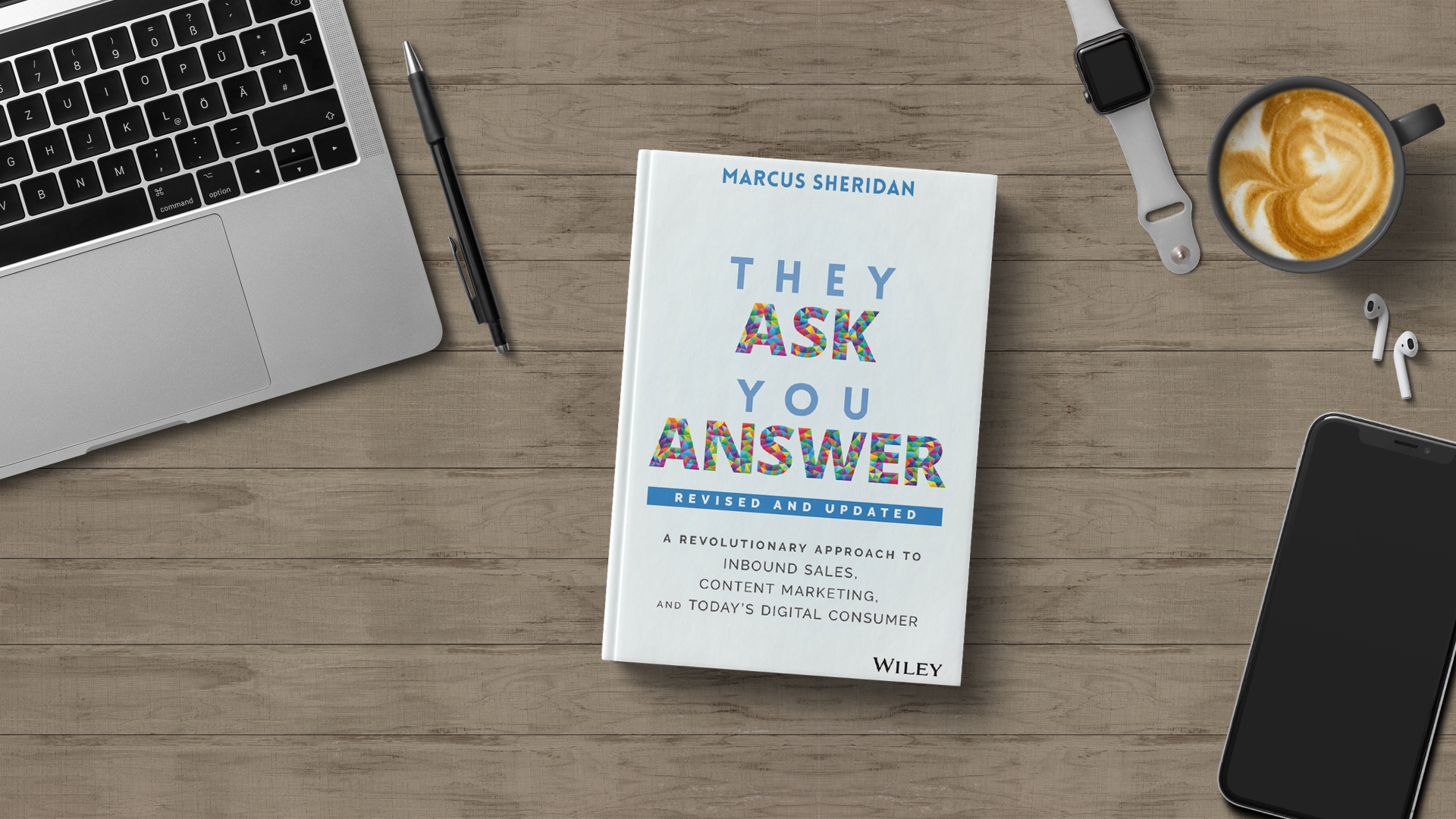 Marcus Sheridan joined two of his buddies who began a swimming pool firm after graduating from university in 2001.

The business was robust over the following seven years. Anyone may secure a loan for a swimming pool now that real estate values are at record highs. Many of them did.

When the economy fell in 2008, the wheels began to fall off, as you would have expected.

Sheridan was obliged to come up with a way out after being pushed to the edge of bankruptcy. He found it in a simple but effective content marketing method he called They Ask, You Answer.

He utilized it to salvage the firm. The process you're going to discover was directly responsible for millions of dollars in new sales.

We're going to do the same thing for your business, no matter how big or small it is. Join us for the next 10 minutes as we show you how to accomplish the same for your company, regardless of size or sector.

A Massive Buying Shift and the Blur between Sales and Marketing

Before we go into the concepts of Sheridan's approach, there are a few things to consider.

First, during the last decade, consumer purchasing habits have shifted dramatically. As Sheridan points out, several studies reveal that the great majority of purchase decisions (70 percent, according to Sheridan) are made before a prospect speaks with a firm.

This is true regardless of the market you're in. Large, small, business-to-business (B2B) or business-to-consumer (B2C).

Second, you may believe that the lessons you will acquire are irrelevant to your particular business or industry specialization.

Everyone thinks their company is the one exception to the norm. Individuals in your field don't purchase the way the system indicates. In the end, the decision is yours to make, but there's only one way to know for sure, and that's to try it.

"They Ask, You Answer" Defined

The fascination with what your consumer is thinking, searching, asking, feeling, and fearing is at the heart of They Ask, You Answer.

Sheridan took a seat at his dining table late one night. He thought about how to salvage his firm. He pondered all the queries he had received regarding fiberglass swimming pools over the preceding nine years.

He had more than a hundred questions on the sheet of paper when he was through.

Then, as you might expect, he and his business partners set out to respond to each one in a blog post or a video. The majority of the articles were published as blog entries on their website, with the question's title serving as the post's headline.

These weren't one- or two-sentence responses; they were full-fledged responses with detailed explanations. They weren't just glorified sales pitches; they handled each question with a "teacher's" mindset, replying objectively and only to educate the audience.

Every business, as Sheridan points out, has hundreds of buyer-related issues. As a result, it's paradoxical that most corporate websites only target a handful of them.

If you're thinking to yourself, "There's no way our buyers have so many questions," you've lost contact with your consumers and need to start understanding what they want to know.

After a few months of doing this, Sheridan began looking at the web analytics on his pool company's website to see what was effective and which material was gaining the most traction.

He discovered that five different categories of material appeared to elicit the most attention and purchases:

Why were those the ones who made the most difference? Because those are the concerns that we (and all consumers) have when making a buying decision.

Most organizations avoid these questions or only address them when dealing with customers face to face. But not Sheridan, and certainly not you, from now on.

Let's take a look at each one separately.

You've probably experienced what Sheridan refers to as the "F-word of the Internet" if you've ever gone to a website to study a product and couldn't locate price information.

Most businesses are hesitant to provide pricing information on their websites for one of three reasons.

Each solution is unique.

Yes, based on their demands, your cost may vary from one customer to the next. However, regardless of your industry, you should be prepared to provide your prospects with a range of feasible rates.

You'll want to provide your consumers a concept of how pricing works in your business at the absolute least.

Your rivals will find out how much you charge.

It's doubtful that your competitors are unaware of your pricing.

You'll turn off your customers.

Sheridan makes two excellent observations in this section. To begin with, if your consumer can't afford your goods, there's a little chance you'll be able to persuade them during a sales call. Second, discussing pricing is about psychology rather than affordability. You are more inclined to trust a company that is honest about its prices.

Rather than hiding behind one of those excuses, be willing to address the most common pricing concerns.

Make a list of all of your primary goods and/or services. Produce at least one blog article or video for the ones that bring in the most money. Describe the variables that influence the price, what the prospect may anticipate seeing in the industry, and where your firm fits in.

Sheridan's article "How Much Does a Fiberglass Pool Cost?" resulted in an additional $3 million in sales directly related to the report.

In reality, that one post rescued his company, his house, the homes of his business partners, and the employment of their employees.

Turning flaws into strengths is the topic of this article.

When consumers buy anything, their first reaction is to be concerned about what may go wrong rather than what could go well. They are aware that they may visit your website to learn about all of the wonderful things that will occur if they purchase from you. They receive this information from every website they visit.

For example, Sheridan describes how someone may choose between a fiberglass pool and a concrete pool.

For years, his prospects would ask him things like, "What are the drawbacks with a fiberglass swimming pool?" And you can bet that whatever questions they ask you in person, they'll look up online as well.

That's why they came up with the title "Top 5 Fiberglass Pool Problems and Solutions" for their piece.

Everyone in the pool business felt they were insane for publishing the article. How many of their rivals' websites had that information? Zero. How many people were interested in finding out the solution to that question? They're all there.

You must make a decision on whether or not to address the elephant in the room. You may either let people seek for and discover solutions to such problems on their own, or you can directly address them and let your clients decide whether or not it's a problem for them.

Aside from establishing a degree of trust that your rivals would find difficult to match, there are two additional benefits to doing so.

First, you'll have the chance to explain why, despite the issues, your product or service is a suitable fit for the prospect.

One of the disadvantages of a fiberglass pool, for example, is that it may not be as long, deep, or broad as the buyer desires. However, if minimal upkeep and a pool that will last a lifetime are more essential to the prospect, the tradeoff may be worthwhile. This transforms your flaw into a strength.

Second, you remove people from your sales and marketing funnel who are unlikely to become clients in the first place, allowing you to focus on those who are. They might as well find out now if they'll ultimately find out about the difficulties (which they will).

Comparisons are the third big content topic, and we, as customers, are attracted by them. This is in contrast to that.

For years, Sheridan and his colleagues had been asked the same question. What is the difference between fiberglass and a concrete pool?

As a result, they published "Fiberglass Pools vs. Vinyl Liner Pools vs. Concrete Pools: An Honest Comparison."

The temptation is to avoid asking these sorts of inquiries once more. Why should you address issues that some of your prospects may not even be aware of?

Turning flaws into strengths and utilizing marketing to eliminate bad leads are two reasons we discussed in the previous section.

Traffic and trust are the other two factors.

People who are considering these topics are looking for answers online. Would you prefer people to come to you for an answer? Or would you rather they go to a third-party site and have other (often ignorant) customers answer it for you?

Furthermore, search engines prefer this material and rank it considerably higher than a self-serving sales pitch.

Here's what you'll need to do next.

After you've created that list, write down your responses and begin converting them into blog articles, e-books, webinars, and other forms of content.

Let me preface this part by noting that what you are about to hear will seem insane. They will, however, work if you accept them, just like the other strategies you've learned thus far.

"Who is the greatest _____?" is a question that people frequently ask. So, Sheridan produced a blog article titled "Who are the Best Pool Builders in Richmond Virginia (Reviews/Ratings)" in classic “They Ask, Your Answer” style.

He listed the five businesses he considered to be the greatest. And, just for good measure, he left out his own corporation. That's the bit where I said you could think I'm insane. Why would he do such a thing?

The first reason is that you immediately lose all credibility once you put your name on that list. It devolves into a puff article, jeopardizing the trust you're attempting to establish with this method.

The second factor is less evident but no less significant. When they're reading this, where are those prospects? They may be found on your site. It can't be a competitor's or a third-party website. This implies that you have complete control over the messaging.

While you may not want your organization to be included on the list, you may position yourself as an expert. Tell them about all of the other useful information on your site that relates to their concerns. Don't be hesitant to ask them in for a tour of the house now that they've arrived at your front door.