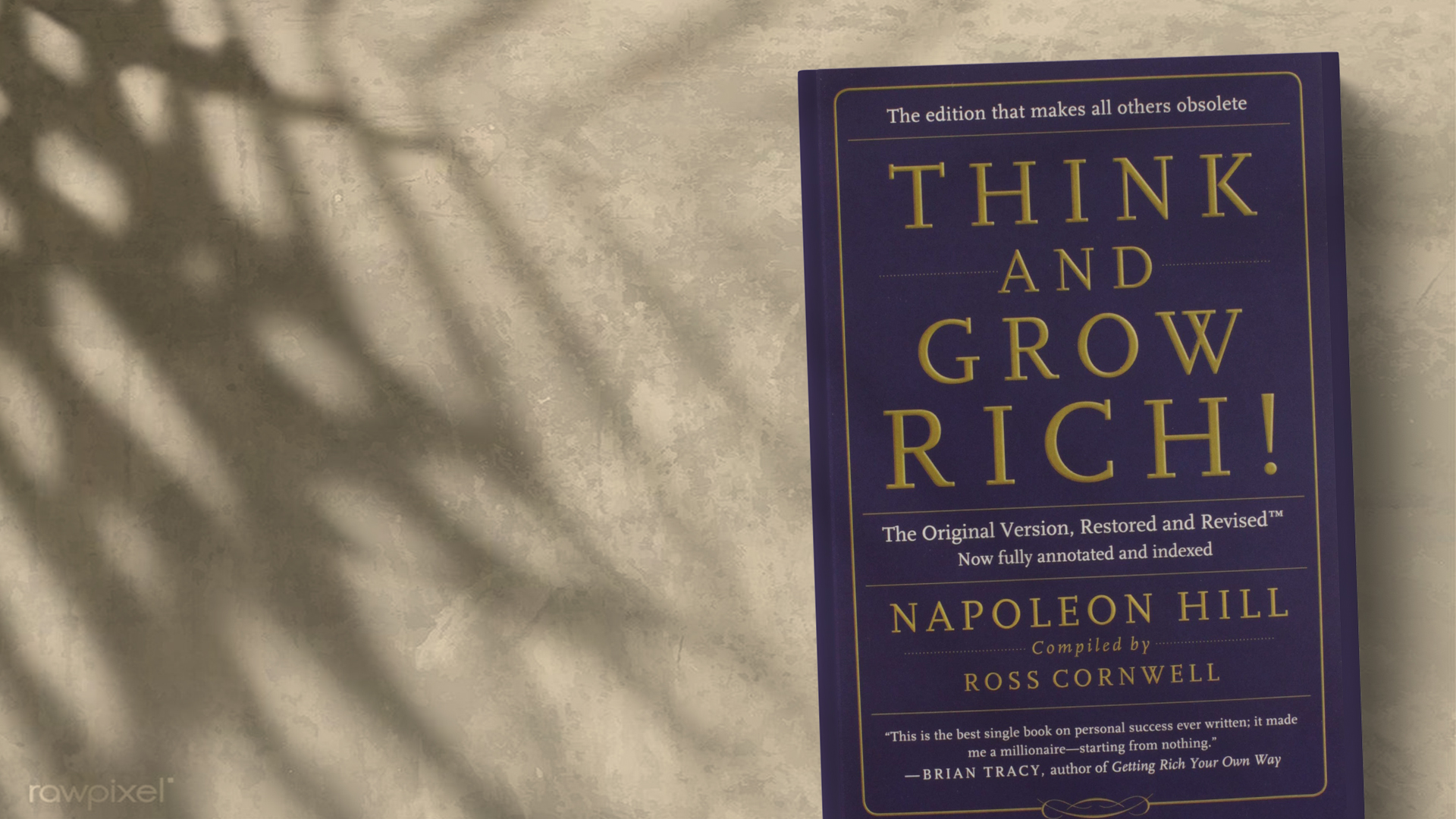 It was 1937, and the planet was under the grip of the Great Depression. The situation was particularly difficult in the United States, where the unemployment rate reached 25%, up from an average of 5% before that tragic day in 1929.

People devoured Napoleon Hill's book Think and Grow Rich when it was published. It offered them hope that by studying and following his 14 ideas, they could take charge of their financial destiny.

It sold out its first production run in three weeks and sold over a million copies by the end of the Depression.

It was among the first best-selling self-improvement books, alongside Dale Carnegie's How To Win Friends and Influence People (released a year earlier). It is widely regarded as one of the finest personal development books ever written, having sold nearly 100 million copies to date.

Let's look at the 14 concepts Hill says we should learn if we want to be wealthy.

Principle #1. Desire: The Starting Point of All Achievement

How badly do you desire it?

The cornerstone of achieving what we want in life, according to Hill, is a state of mind known as "a burning desire to win."

This is not the same as wanting. Everyone wishes they were wealthier, in better health, and in better relationships. On the other hand, successful individuals have a strong desire to do it, as seen by their accomplishments.

The following is Hill's six-step strategy for translating your burning desire to achieve into financial success:

Principle #2. Faith: Visualization of, and Belief in the Attainment of Desire

This idea is believing—deep down—that you will succeed in carrying out the strategy you've set in action.

There must be no uncertainty in your subconscious mind, or else you'll come up with all kinds of excuses not to carry out your strategy.

By providing your subconscious a consistent diet of positive thoughts, you may train it to support you.

You should focus your mind, especially on two things.

With this one, Hill was ahead of his time. Many studies have shown that "acting as if" may put you in a more optimistic frame of mind, causing your behavior to alter consistently with your objectives.

Autosuggestion: The Medium for Influencing the Subconscious Mind

This is a continuation of the previous idea. According to Hill, we'll be more likely to achieve our goals if we utilize affirmations and visualization.

According to the notion, if you desire more money, you should picture yourself with more money.

However, Hill adds a crucial twist here. You must also imagine yourself doing the job you'll provide in exchange for those riches, enabling the two to become firmly linked in your memory.

Hill specifically instructs us to state how much money we desire to get and how we aim to obtain it—aloud. This should be done twice daily, in the morning and evening.

The catch is that your subconscious will remember that if you want to make more money, you must do more of the activities that will make you more money.

According to Hill, the only way to get wealthy is to possess specific knowledge that the market will appreciate and pay for. To establish an empire, you'll need to know a lot of things.

This is divided into two sections.

The first step is to figure out what expertise you require. Depending on the present status of the market, this will vary over time.

Many years ago, someone who could teach you how to create leads for your business using your fax machine (what is a fax machine?) was in great demand. Not that much these days.

The second step is to determine how to obtain that information. This necessitates having trustworthy information sources, which you may get by:

Ultimately, through actual planning, the third component organizes the knowledge and uses it for a specific goal.

To complete the cycle, because the marketplace is always evolving, your knowledge base must as well.

As Hill puts it in his book:

Imagination: The Workshop of the Mind

Man can construct everything he can conceive. The fifth premise boils down to this.

Two types of imagination exist, according to Hill.

He claims that really fresh ideas and concepts emerge when the conscious mind is aroused by the feeling of tremendous desire, such as accomplishing one's greatest objectives and aspirations.

He also makes the case that hard effort alone is insufficient to generate wealth. It necessitates the integration of ideas, a clear goal, and specific strategies.

The adage goes that the greatest method to have a fantastic concept is to generate a lot of alternatives.

Organized Planning: The Crystallization of Desire into Action

Hill was somewhat more practical than many of today's "self-help" books, which claim that you can generate your reality solely with your thoughts.

We'll need a foolproof strategy to get there if we're going to meet our objectives. He proposes that we form a Master Mind group to assist us to solidify the strategy since the only way to ensure that your plan is genuinely foolproof is to associate yourself with individuals who can support you to get where you would like to go.

However, you must ensure that your strategy is updated regularly. As Hill put it, "temporary defeat" will nearly always stand between you and where you want to go.

The key to your eventual success is comprehending this and continually changing your strategy as you receive input from reality.

This concept is best illustrated by a statement from Dwight Eisenhower:

"Planning is everything; the plan is nothing."

Decision: The Mastery of Procrastination

The decision is the complete antithesis of procrastination. And we must combat it at all costs.

Hill discovered that rich individuals tend to make rapid judgments and alter them slowly, if at all, after researching the world's most successful people and comparing them to unsuccessful ones.

The failed folks have a tendency to take their time making decisions and then altering them frequently.

It's crucial to remember that what permits successful individuals to make rapid decisions is that they have a very clear idea of where they're going and how they will get there. That makes most choices a breeze to make.

According to Hill, "The world has the habit of making room for the man whose words and actions show that he knows where he is going."

If we want to achieve our goals, we need persistence, a mix of desire and willpower.

"A few carry on despite all opposition until they attain their goal. These few are the Fords, Carnegies, Rockefellers, and Edisons."

It's a tired cliché to talk about Edison's numerous failures in creating the light bulb and his retort that "I have not failed. I've just found 10,000 ways that won't work."

Consider this: how many times are you willing to fail to achieve your objective? When is it time to call it a day? If the idea in your mind isn't "I will never give up," you may need to work on some of the other ones.

Power of the Master Mind: The Driving Force

The Master Mind is one of Hill's important beliefs, and it's a strong one. He refers to it as "coordination of knowledge and effort, in a spirit of harmony, between two or more people, for the attainment of a definite purpose."

Hill claims that "Men take on the habits and power of thought of those with whom they associate in a spirit of sympathy and harmony" through these groupings.

Things went well for those guys, and since then, groups of accomplished individuals (typically CEOs) have met regularly to assist each other in addressing their most pressing problems.

You might think about joining or establishing your own group no matter where you are on your path.

The Mystery of Sex Transmutation

I'll simply say it right now: this one is kind of (a great deal?) strange.

Here's what he said, so you can decide for yourself:

"Fortunate, indeed, is the person who has discovered how to give sex emotion an outlet through some form of creative effort, for he has, by that discovery, lifted himself to the status of a genius."

He's suggesting that if you can find out how to redirect your sexual energy into a creative or productive endeavor, you'll have a better chance of succeeding.

I'm not going to say anything more about this one.

The Subconscious Mind: The Connecting Link

Now, this seems less contentious, and it has been the subject of a slew of self-help books since then.

The main point of this part is that your emotions have an impact on your subconscious mind. Therefore you must be careful to only expose it to good feelings rather than bad emotions.

According to Hill, desire, faith, love, sex, enthusiasm, romance, and hope are the seven good emotions.

You'll be on the right track if you feed your mind with more positive emotions than negative ones.

The Brain: A Broadcasting and Receiving Station for Thought

We return to some strange, untested concepts in this portion. Keep in mind, though, that most of what Hill recounts in this book would not have been verified by science at the time of publishing, and perhaps (just maybe) he was ahead of his time on this one as well.

Hill compared the brain to a radio, saying it had a "sending station" and a "receiving set" (note that today's metaphor is the computer, which again fails to accurately represent our most essential organ).

The basic concept is that by using the other techniques in the book, we may tap into the brains of collective human intellect by placing our thoughts in a high vibrational state.

We'll have to make do with the collective intellect of the globe we have access to through the wonders of technology until this hypothesis is confirmed (I hope people are working on it).

The Sixth Sense: The Door to the Temple of Wisdom

Hill outlines what we now refer to as intuition in this concept. He thought that our bodies include an organ that receives information from sources other than our physical senses.

If nothing else, Hill's method for accessing intuition is innovative.

Hill formed his own "Invisible Counsellors" made up of persons who possessed the characteristics he desired.

In his imagination, he had fictional meetings with these figures, including Edison, Napoleon, and Abraham Lincoln. He would vividly picture these interactions, subsequently attributte all of his hunches and instincts to them.

Give it a shot.

How to Outwit the Six Ghosts of Fear: Clearing the Brain for Riches

Finally, Hill advises that we must rid our thoughts of fear to be successful, which leads to hesitation and doubt in our everyday lives.

We are not focusing on what we need to focus on to be successful if we are worried about these things.

We may erase our worries by simply opting to concentrate our attention elsewhere. Because these anxieties are nothing more than states of thought, and we have control over our minds.