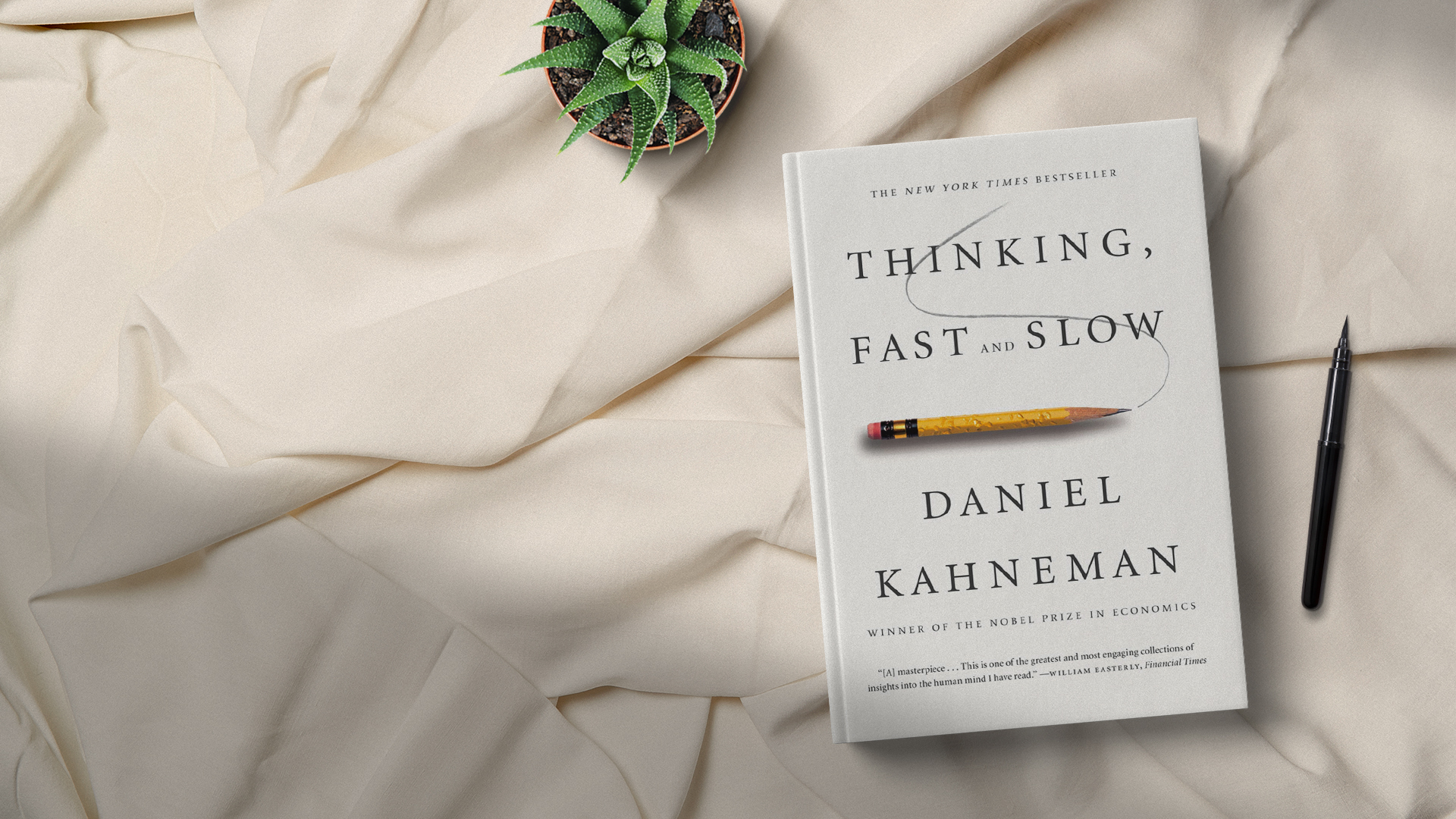 Every day, we make hundreds of decisions, beginning with the minute we wake up...

We've already made a lot of choices before we've even gotten out of bed. Many of these choices are made unintentionally. When you're getting dressed, for example, which leg do you put through your pants first?

For the greater part of your life, you've probably been doing it the same way every day. To make the solution, you probably had to imitate the process of putting your trousers on.

Other choices are intentionally made. For example, what is the solution to 23 x 18? Most of us would need to take out a pen and paper (or our smartphone's calculator) to determine an answer. What's the goal of it all?

We regularly ask others to make judgments in business and in life. Yet, we know very little about how our brains operate to make them. Shouldn't you know how someone's brain works if you want them to utilize your products and services?

In this overview, you'll discover why the brain has two "systems" for making judgments and why those decisions aren't always made as you expected.

A world-renowned psychologist and researcher named Daniel Kahneman authored an entire book about these two systems. He explains how we may utilize them to make better judgments and influence others to make decisions in our favor in the book.

You have two systems for making choices, according to Kahneman.

System 1's job is to keep a functional mental representation of your surroundings up to date. That model comprises co-occurring linkages between concepts, circumstances, events, actions, and results. This system operates in an automated and timely manner.

Here are a few illustrations of how System 1 works:

These tasks don't need much of your time or attention. And you can probably complete many of them at once.

If I asked you while you were putting your trousers on in the morning, you could probably give me the answer to 2+2. These are things that we can accomplish on "autopilot," if you will.

In fact, one of System 1's distinguishing features is that it cannot be switched off. Suppose you have presented a word on a page in a language you understand. In that case, you will read the word unless your attention is completely focused on something else, as Kahneman shows out.

System 2 is the slow, analytical mode of thinking, according to Kahneman. It devotes its attention to mentally taxing activities that need it.

Although System 2 has a lot of functions, each one of them requires your full attention to perform and is interrupted when your attention is diverted. Here are a few illustrations of how System 2 works:

These tasks need a lot of your concentration, and you'll probably only be able to do them if you offer them your undivided attention. If you were also trying to evaluate two identical items for total worth, you wouldn't be able to figure out the solution to "23x18=?"

The link between System 1 and System 2 is one of their distinguishing characteristics. System 1 is constantly offering perceptions, intents, and sensations to System 2. System 2 accepts System 1's proposals for the most part and only jumps into high gear when System 1 fails to respond.

For example, you were probably able to say "2+2=?" without "actually thinking about it." Still, you didn't have an intuitive answer ready when you looked at "23x18=?" and System 2 kicked in. System 1 excels at weaving tales together to generate coherent knowledge. When there is a lack of information, System 1 leaps to conclusions.

Because this prejudice is so common, Kahneman invented the term WYSIATI, which stands for "what you see is all there is."

System 1 is not prone to uncertainty, but System 2 is responsible for picking up the slack left by System 1. Our minds are pattern-seeking and sluggish creatures. In fact, since we are uncomfortable with the idea that much of what we perceive in life is random, we frequently detect patterns where none exist.

Even if our mind loves to come up with stories that support it, we can't extract the correct information from limited samples. We pay greater attention to message substance than to information about their trustworthiness.

The anchoring effect is a psychological phenomenon. The first number we perceive in a scenario sets the tone for all subsequent numbers.

The estimations are consistent with the number of persons who considered it — therefore, the anchor picture. Any number you see will anchor you, and if the stakes are high enough, you should activate System 2 to counteract the impact.

A mental shortcut is referred to as a heuristic. The availability heuristic is a method of determining frequency based on "the ease with which cases come to memory."

For example, suppose you watch a lot of spy movies. In that case, you'll be more skeptical about conspiracies in real life since your mind will have an easier time obtaining examples. This is why many people assume the world is more frightening and violent than it is — the media gives unusual events undue prominence.

Heuristics are incompatible with logic, although they play a significant part in human decisions. When System 2 is more engaged, the ease with which instances come to mind is a System 1 heuristic that focuses on content.

Several lines of evidence point to the conclusion that persons who allow System 1 to guide them are more vulnerable to availability biases than others.

System 1 can make improbable forecasts. These forecasts are frequently unreasonable since System 1 does not require evidence to make decisions.

Causes take precedence over statistics. There is a significant disconnect between how we think about statistics and how we feel about individual instances.

Non-causal information has a bigger influence on our thinking than statistical data with a causal interpretation.

On the other hand, even shocking data will not modify long-held ideas or beliefs based on personal experience. According to Kahneman, performance outcomes have a tendency to normalize to the average value, a phenomenon known as regression to the mean.

Our brains are always trying to make sense of the world, and we frequently seek explanatory stories to help us do so. When telling a story about the past, we often create a compelling story based on a fascinating narrative rather than on facts.

Google, for example, is one of the most profitable businesses on the planet. You could think they were successful due to a series of solid judgments, but the fact is that chance played a significant role in their success. The ultimate test of a theory is whether it could have predicted the outcome in advance.

Most of our favorite stories fail this test, but it provides us with a false sense of comprehension that makes us feel better.

Our overconfidence in our opinions indicates the coherence of the tale that System 1 and System 2 generate for us, and System 1 is intended to leap to conclusions based on little evidence.

However, some of our most fundamental ideas are based on no evidence at all. System 1 doesn't require a lot of data to get too bold conclusions and make aggressive forecasts. We have a lot of faith in our judgments and views, yet faith is primarily based on cognitive illusions.

Because the world is unpredictable, even experts make blunders. Coherence, on the other hand, helps us feel good. Therefore it's critical to be confident in our choices.

The illusion of validity, which assumes that our talents, and nothing else, decide the end outcome, is another illusion that makes us feel better.

According to studies, a basic algorithm can typically match or exceed the accuracy of experts. Formulas are always preferable to depending on human intuition when making judgments. This might be due to specialists' attempts to go outside the box and examine complicated combinations when simplicity is preferable.

This information may be applied to tasks such as interview processes. To begin, make a list of roughly six characteristics that are required for success in this role.

Then, rank a list of questions that can accurately measure such attributes. Score each response and vow to employ the candidate with the highest overall score, even if another prospect appeals to you more.

If you follow this approach, you'll be more likely to locate the best candidate than if you go with your gut.

This is because people want to know what will happen and avoid taking a chance. Changes in one's reference point affect utility.

Losses are more painful than wins, and our motivations reflect this. This might be one of the reasons why individuals don't create high-achieving objectives. A loss occurs when you set a lofty goal and never achieve it. You make it again if you place a low aim and execute it. We are more prone to seek out danger when a certain loss is guaranteed.

We are more prone to regret our decisions when we deviate from our usual behavior. You will be happier if you do something unexpected and receive a superior result than if you conduct your normal behavior and get the same result. Many of the decisions we make are motivated by a dread of regret.

We are prone to focusing on the specific incident rather than the overall picture when evaluating a decision.

Consider the decision as one of several to avoid undue caution caused by loss aversion. Single judgments elicit emotional reactions from System 1, whereas comparisons need a more thorough examination, which engages System 2.

We prefer to believe that we make decisions in our own best interests. On the other hand, our choices are heavily impacted by our memory, a System 1 function that developed to reflect the most intense moment of a pain or pleasure episode and the sensations experienced after the episode ended.

We are prone to recall the negative aspects and frequently rely on such recollections to make future judgments.

Most individuals are unconcerned about themselves, just concerned with the memories gathered to feed various storylines. As a result, peak highs with a short duration provide us more pleasure than intermediate highs with a lengthy time.

Happiness does not have a straightforward definition, and it should not be employed as if it did. Because people have various values, well-being implies different things to different people.

Furthermore, determining total life satisfaction is tough. System 1 is concerned with the current mood, but System 2 is plagued by biases and heuristics.