Book Summary: To Sell Is Human 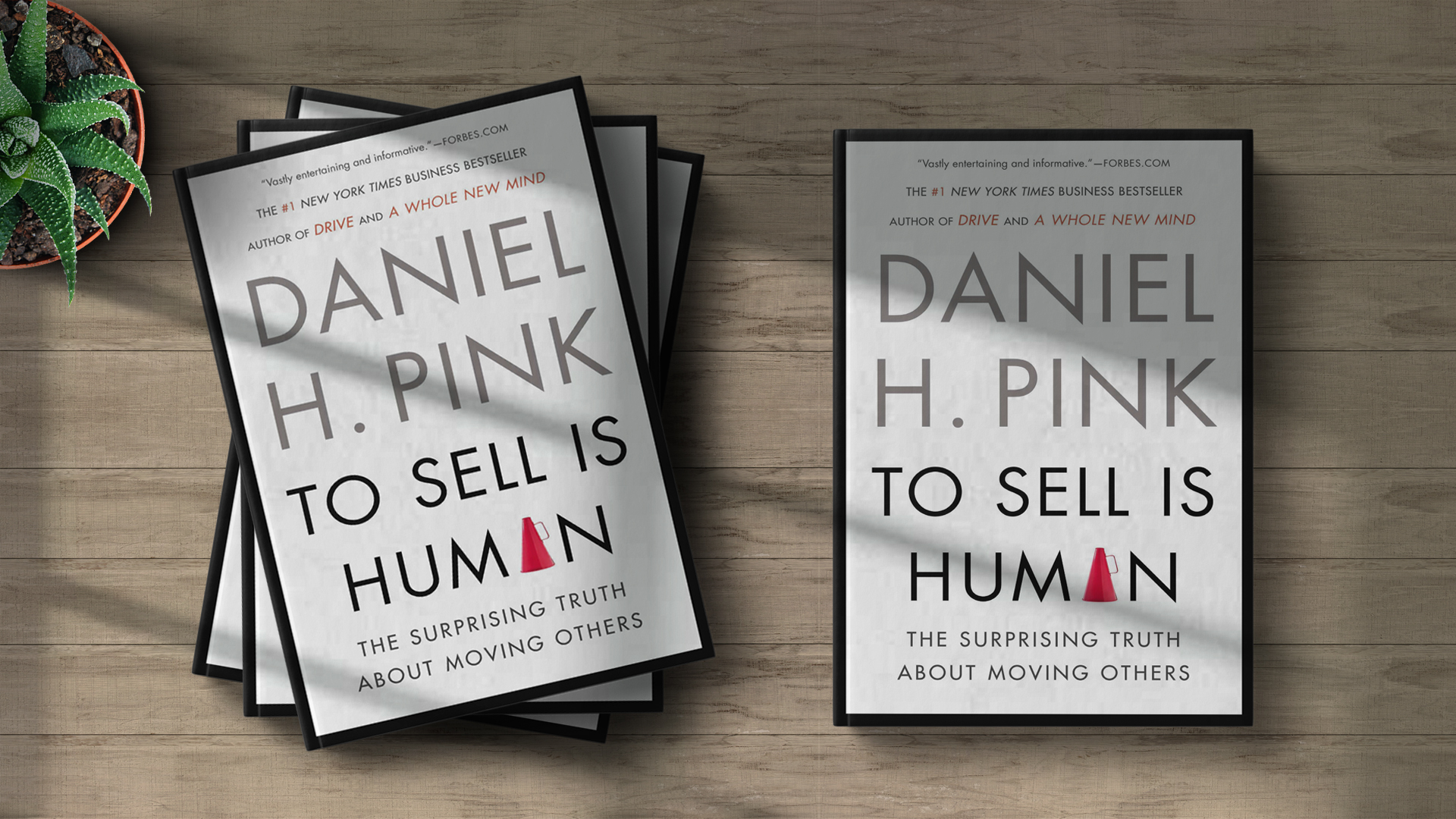 Back in the old days, the closer was the most important part of the sales process. It's all about getting the consumer to sign on the dotted line so you can go on to the next prospect, contract in hand.

What mattered was determining what a person needs and "fixing" their problem by persuading them that you had THE solution to their problem.

That was valid when information was dominated by a few people. You had to trust a salesman to educate you about the benefits of a product and that they understood what they were talking about. And, maybe more crucially, that they were selling it to you at a reasonable price.

The salesman's job moved to that of the problem solver as technology made information more available and allowed customers to study, explore, and buy goods and services online. People nowadays may fix their own issues, but only if they are tackling the correct problem.

Dan Pink discusses how marketing now entails sifting the huge volumes of information to discover the most relevant and clarifying elements. That's what's in his book, To Sell Is Human.

Pink's revised ABCs, "Attunement, Buoyancy, and Clarity," is part of a change in the sales industry away from a mentality of "Always Be Closing." He views selling as a way to help people and, today, we'll look at how you can do the same.

There seem to be three steps to achieving attunement: putting oneself into harmony with persons, organizations, and environments in its most basic form. It's about seeing things from other people's perspectives and aligning your behaviors and outlooks with theirs.

To begin, Pink claims that you must reduce your power to enhance it. He claims that if you enter a conversation feeling like a person with lesser power, you will be more inclined to try to see things from the perspective of the person you are interacting with. That will make it a lot easier for you to enter inside their thoughts and manipulate them.

Those who feel strong have a tendency to focus too much on their own point of view. They fail to adjust to the viewpoints of others. They come away with a negative impression of the scene in front of them.

Pink also believes that you should utilize your mind as well as your emotions. He refers to looking at a sales scenario from the other party's perspective as a cognitive activity he refers to as perspective-taking. That's not the same as empathy, which is a feeling-based emotional reaction. However, he contends that both are critical.

He cites research that mimicked the sale of a petrol station and found that the top bidder paid less than the sellers desired. But there were common interests between the two parties that may help cement the deal.

One group was instructed to envision what the other was thinking, while the other was asked to ponder how the other felt. The last group served as a control, with merely general instructions.

The emphasizers produced more bargains than the control group. Still, the perspective-takers outperformed them all: 76% came up with deals that satisfied everyone. They could extract what they needed from the circumstance and the demands of all parties involved to arrive at a clear solution that helped everyone.

Reading how people in groups engage and interact with one another is just as significant as seeing a scene from one man's point of view. This mental picture of how people interact is known as "social cartography."

It's a useful tool for ensuring you don't miss out on a crucial member in the group – or spend time pitching to the incorrect person.

The third and last aspect of attunement is imitation, which is a physical act. You've certainly heard a million times that you should gently emulate the other person's behaviors during a job interview. Still, Pink takes it a step further as a way to connect with people and build trust.

It's a technique you should employ with caution because if others suspect they're being copied, they'll turn against you. However, strategically copying speech patterns, emotional responses, or overt behaviors might help you build attachment and improve your capacity to influence others.

It gives the impression that you are in sync with other people and are both on the same page.

All of these strategies, according to Pink, can help you become a better salesperson while also building deeper relationships with consumers you'll have a better knowledge of.

One of the most important abilities for moving people is buoyancy, or the ability to stay afloat in a sea of rejection.

He identifies three aspects of buoyancy, which apply before, during, and after attempting to move others.

The first is self-interrogative self-talk before attempting the sell. Hundreds of books have promoted the concept of giving oneself a pep talk before a big event, claiming that doing so can improve your confidence and help you succeed.

A good approach to frame your affirmations is through interrogative self-talk. That is because asking yourself if you can do something forces you to justify the methods you can. This gives you more confidence. Why? Because it prompts you to recall occasions when you have succeeded in a similar scenario.

And it reminds you of the talents you know you have and can use to a challenge or difficulty. It may also remind you of the underlying motivations for pursuing a goal. As a result, it will motivate you to achieve it more than if you were doing it only to satisfy external constraints.

The second factor is optimism. Consider times when you were preparing to purchase a product. The salesperson was either friendly or impatient, eliciting pleasant or negative feelings.

Do you think you would be more inclined to buy from someone you liked and treated nicely rather than a person who made you feel harassed?

Pink mentions a study in which participants were separated into three groups. They were informed that a wedding was in the works.

They had made a deal with a catering firm to pay $14,000 for the meals, but the seller suddenly contacted them and said the price had actually risen. The merchant was nice in one case, aggressive in another, and neutral in the third.

Although the conditions were the same, individuals who heard the positive-style presentation were twice as likely to accept the contract as those who listened to the negative-style pitch.

Positivity demands that you believe in what you're selling, but there's a catch. Too much optimism isn't necessarily a good thing. It has the potential to make you crazy and prevent you from learning and analyzing unpleasant emotions. Negativity is necessary to keep you grounded and allow you to get criticism of your work.

The last component, which Pink refers to as the explanatory style, occurs after the fact. It's the narrative you tell yourself to explain how things turned out. How you think about your day and how you define the bad portions may have a big impact on whether or not you remain afloat.

You will have a lower likelihood of success if you surrender too readily. And if you believe all failures are your fault and feel helpless in the face of what you think is a permanent predicament.

Instead, view rejections as transitory, particular, and external.

With the correct combination of those two world perspectives, you may become a realistic optimist - someone who sees positive things but keeps their eyes open.

If you put these concepts into practice, rejection will still hurt. Still, you'll probably be able to rise above it a bit easier.

One of the really crucial qualities the "new" salesman must have, according to Pink, is the ability to help others understand their position in new ways. They should identify issues they didn't think they had - or clarity.

Framing is one of the most essential tools salesmen (or anybody) use for providing clarity.

Rosser Reeves, an American advertising executive who made a legendary bet with a colleague, was with Pink. The two guys came upon a homeless man begging for money and holding a homemade sign that stated, "I am blind." He wasn't doing so well and he appeared despondent.

Reeves advised his buddy that by adding four words to his sign, he could greatly boost the guy's amount of money. The wager was made, and Reeves changed the sign after conversing with the individual. Strangers stopped to chat to the man and replenish his cup as he sat back.

The words "It is springtime and," which he had added, made the sign read: "It is springtime, and I am blind." The contrast generated by those four phrases prompted people to help the guy. People were able to relate their reality to that of the man and experience empathy due to this disparity.

It's why, while seeking or attempting to offer clarity, one of the most critical questions to ask is "Compared to what?" Pink outlines five frames you may utilize to help folks you're trying to persuade to relocate.

The first is the "less frame," which claims that restricting people's options might help them perceive their possibilities more clearly. Everyone enjoys alternatives, but too many of them may become annoying, causing individuals to abandon the project.

The "experience frame" follows, which informs us that people's feelings are stronger and remain longer around events than material items. If you want to sell somebody a car, focus on the travels they'll take, the sights they'll see, and the friends they'll know rather than the vehicle's attributes.

Customers are more inclined to buy into a concept if they can envision themselves experiencing it.

The "label" frame may help individuals identify something by answering the "compared to what" question. It can put acts or experiences into perspective and describe what is anticipated, keeping people in line.

People are much more likely to choose the "blemished" product over one that is fully good. That's if you bring up one unfavorable feature of a product after touting many of its virtues, according to the "blemished" framing. This appears to work best for busy or preoccupied folks and seems to be making a hasty judgment.

The "potential frame," on the other hand, argues that people are more interested in and intrigued by what someone could accomplish in the future rather than what they have previously done. It's why strong prospects might be more exciting to a team than a veteran player.

Or why an up-and-coming designer can attract everyone's attention if they are dubbed "the next great thing."

On the journey to clarity, Pink gives one more tool: the off-ramp. He believes that you should not simply guide people in the proper path without providing them with a blueprint to follow.

You must give clarity on how to behave and how to think if you want people to move or buy what you're selling. Pink claims that you would have no issue persuading others to agree with you if you do that.

So there you have it: a crash course on applying the new ABCs of selling to arrive at your desired destination.