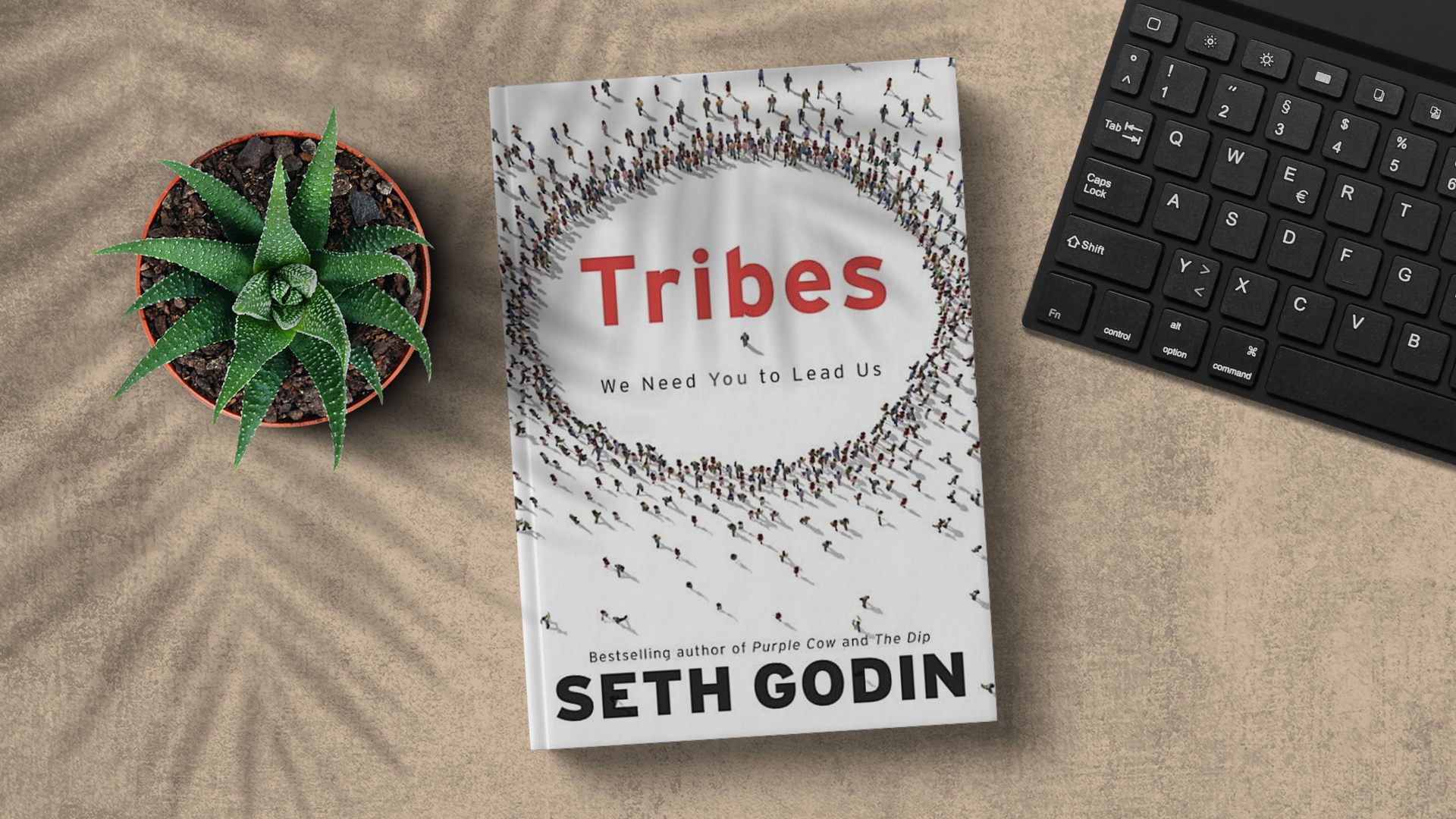 Don't we all want to be a part of something?

It is indeed one of the most effective survival strategies we acquired from our caveman forefathers. You were doomed if you didn't have a tribe back then.

A tribe, according to Seth Godin, is a collection of individuals linked to one another, to a leader, and to an ideology. That concept was to keep alive in the prehistoric days.

And, while it may not be a life-or-death situation these days, we all have a deep yearning to be a part of or lead a tribe.

Tribes may be found almost anywhere. All around the world, within and outside companies, public and private, NGOs, and classrooms. Each of these tribes yearns for authority and a sense of belonging.

This book is your guide to making things happen.

Why Tribes Are More Important than Ever

As Godin puts it, three events have come recently as a result of the Internet's expansion, all of which point to the same conclusion:

In a nutshell, we've come to "the end of the average."

Since tribes are thriving all across the world, Godin believes there is a severe leadership deficit.

As his main argument, Godin weaves together the following five points:

So, how do we go about doing it?

There's a distinction between managing and leading, as you've surely heard before.

When average was the accepted standard, you could simply tell people what to do, and they would follow through - that was management.

In today's world, inciting a movement is the most effective approach to persuade people to act. This is what modern leadership entails.

Great leaders start movements by giving their tribes the ability to connect with one another. Rather than forcing others to follow them, they lay the groundwork for them to develop relationships.

In reality, all it takes to convert a group of individuals into a tribe is a common interest and a means of communication.

Here are the four modes of communication:

While most individuals are concerned with the size of the tribe, Godin provides an excellent example to demonstrate why this attitude is incorrect.

He claims that, despite having millions of members, the American Automobile Association has considerably less effect on the globe than the two thousand individuals who attend the TED conference each year.

The quintessential example of a tribe is Wikipedia.

Jimmy Wales, the co-founder, gathered a small number of individuals (the great majority of articles on the site are written by 5,000 people) and enlisted their help in realizing a vision.

He didn't give them any instructions. He didn't just supervise their job; he was in charge of it. He led it by using technology to link the tribe, making it easier to interact with one another and the outside world.

CrossFit is another excellent example. Crossfit.com was a tiny group of people practicing insane exercise regimens uploaded to the site by Greg Glassman when this book was launched.

CrossFit is now a worldwide phenomenon, thanks largely to Glassman's understanding of how to create a tribe. He was able to establish an atmosphere in which the tribe desires and can interact with one another.

But Will You Do It?

Now is the time for us to make a decision. Will we make an impression or not?

It's understandable why we wouldn't want to. Being unique attracts attention, and we secretly fear that someone may despise what we accomplish. After all, before Elon Musk became a billionaire, he was chastised for being an idealistic dreamer with little possibility of success.

At best, doing something exceptional is unpleasant, and at worst, it's terrifying.

But therein is the opportunity: just a few people are ready to put themselves in the uncomfortable position of leading. You've located the location where a leader is required after you've recognized the source of pain. You are needed where you are.

This concept assumes that your tribe will not be for everyone. Some people will look down their noses at your group and go on. On the other hand, others will lean in, becoming an enthusiastic member of your tribe and assisting you in finding all the other individuals on the globe who belong there.

Nobody is going to personally deliver an invitation to join a tribe's leadership team. You must take charge of your own destiny.

Picture Jim Delligatti, a McDonald's franchisee in the third tier outside of Pittsburgh. Jim violated the rules in 1967 when he created the Big Mac, a novel sandwich. It was on the menu in McDonald's restaurants all over the world in a year.

He wasn't asked to make the sandwich. He was well aware that he was going out on a limb by doing so. But he went ahead and did it because he believed it was the proper thing to do.

People like Jim see the distinction between things that happen TO you and things that you DO.

There seems to be one thing you should know about going first: the new thing is rarely instantly better than the old thing.

Facebook wasn't as good as MySpace at first. However, this did not deter Mark Zuckerberg from getting started.

At first, Amazon.com wasn't as wonderful as going to Barnes & Noble and purchasing a book. That didn't stop Jeff Bezos from getting started.

The Tesla Roadster wasn't quite as excellent as other sports vehicles initially. That didn't deter Elon Musk from getting started.

What's the point? You'll never get started if you expect the new thing to be better than the old thing right now.

The Key Elements of Launching a Movement

Every action begins with a little step. And, thanks to the Internet and social media, movements may start with only a few individuals and quickly grow into a global phenomenon.

What is the purpose of your movement? Why should anyone be concerned? Why should they want to be a part of your team? All of these things may be explained in a manifesto.

Give it free and make it as simple as possible for it to spread. It doesn't have to be printed or even written, as Godin points out.

What's important is that it serves as a slogan or motto for your way of life. It should bring your tribe members together and provide structure.

Make it simple for your followers to communicate with one other.

Allowing individuals who share the same purpose to connect is one of the most effective things you can do as a tribal leader.

When Harley Davidson motorcyclists pass each other on the road, they give each other a knowing nod. For example, the bond formed among volunteers for a major event or product launch.

Find out how to construct these relationships such that they are as connected as possible.

Recognize that the goal of a movement is not to make money.

Money exists to facilitate mobility; it is never the goal. As Godin puts it, the moment you try to cash out, your movement's development is stifled.

Keep tabs on your progress.

You may help everyone realize how healthy the activity is by publicly recording your progress. Make it obvious how your supporters can help you correctly move the needle.

Here are the six guidelines you must adhere to.

1. Transparency is the only way to go.

You will be discovered if you are not transparent. You might go down in flames, as many televangelists have, or your movement could suffer a gradual death because people know you aren't completely dedicated. In any case, your followers will be able to smell something fishy a mile away.

2. Your movement must be larger than yourself.

Publishing a book about your views isn't the same as starting a movement. It achieves this by getting people to do things in new ways and connecting them in the process.

You're on the correct road if your mobility continues to develop. Just don't attempt to go too quickly, or you'll risk a flameout before you "get there."

4. Compared to the status quo or movements that operate in the other direction, movements become more apparent.

Ensure you're not pointing out how you're competing with other activities with similar aims to maintain the sightlines open. Make a point about how you're all working together to change the current quo.

6. Bringing down others is never as beneficial to a movement as raising them up.

Make sure your ultimate objective isn't to demolish the institution but to forge your own unique route.

Painting an image of the future and organizing a tribe to get there is the essence of leadership.

You have the power to change the world if you have the guts to become a leader and stay with it long enough for your detractors to recognize that you'll get there one way or another.

There has never been a more exciting time to be alive or to start a tribe. It's all up to you. Will you take the initiative, or will you follow?