Book Summary: You Can't Teach a Kid to Ride a Bike at a Seminar 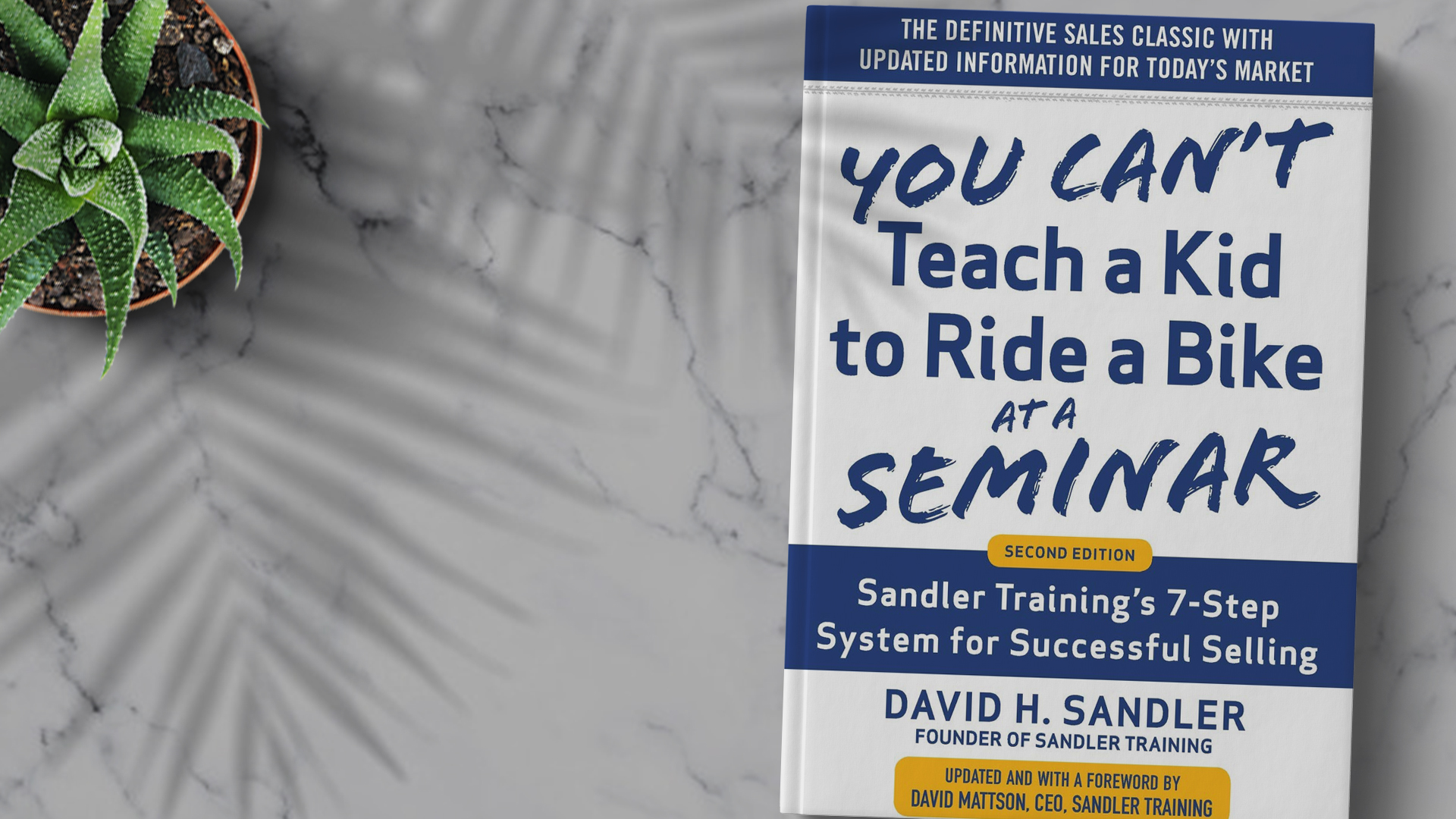 David Sandler was an enthralling individual.

He was a young salesperson in 1966, and he was struggling. He was doing everything he'd been taught, but he didn't have much luck closing sales. He wasted too much time cold calling and giving presentations to prospects who lacked the authority or financial means to become his clients.

He resolved to take matters into his own hands and attempt something completely different. It was the polar opposite of everything he had been taught, and it worked. Exceptionally beautifully done.

Sandler began forming "verbal contracts" with his prospects and developed a whole sales strategy to reclaim control of the sales process from the client.

His technique is still employed by tens of thousands of firms worldwide, and it works just as effectively now as it did in 1966 because it is based on basic psychological principles.

Let's take a look at the Sandler Training 7-Step System for Successful Selling.

Strategies to Help You in Each of the 7 Steps

A few Sandler ideas will assist you in being more successful in each step.

The first is the "dummying up" approach. The notion is that the most successful salesmen would appear and act quite similar to those just getting started. The only difference is that the professional would do it on purpose, unlike the dummy.

When a prospect asks a question, they don't give information; instead, they receive it. To demonstrate the idea, below are a few examples from the book:

Prospect: Have you been in business for a long time?

Salesperson: That is a fascinating question... You had to be asking for a purpose.

Prospect: Is it a sure thing?

Salesperson: What if I said it was? So, what's next? [Pause] What if I told you it wasn't?

Prospect: It's more than we had planned to spend.

Salesperson: This isn't rare. How much did you expect it to be, off the record?

Prospect: [gives a number as a response].

Reversing is a similar but distinct approach in which you ask your prospects questions rather than providing the answers. There are several reasons for this, but the most important reason is that your goal is to persuade the prospect to do the majority of the talking.

You'll keep the prospect interested, and you'll have more time to emotionally engage them. Furthermore, because you'll be getting to the heart of the prospect's problems, you'll earn credibility in their eyes.

People love to purchase, but they despise being marketed, as Sandler points out. The skilled salesman recognizes this and uses Negative Reverse Selling to allow their prospects to close independently.

To explain, he utilizes the metaphor of fishing. When a novice angler gets a bite on the line, they begin reeling furiously. The expert angler lets out a bit of extra line, allowing the fish enough time and space to securely put the hook in their jaw. It's incongruous, yet it works.

Prospect: I believe I agree with what you're saying.

Salesperson: Fascinating. I would not have thought you were interested in my product based on what you've said so far. What did I overlook?

Prospect: Perhaps you missed how I view your product resolving my issue.

Salesperson: That's fantastic, but I'm still a little perplexed. Could you explain how you perceive the fit in greater detail?

Prospect: Of course, I'll put it to good use when...

Let's take a look at the seven stages you can use to start closing more sales.

Bonding and rapport may be summarized as follows: always make the prospect (or client) feel better than you do.

Making oneself "not-OK" on purpose is the simplest method to achieve this. It's a good idea to start with dummy statements like "I don't understand" or "What precisely do you mean?"

Even if you have solutions at your fingertips, make sure you don't appear to have them. Don't use buzzwords, and give your prospects the impression that they "know it all."

This is a strange piece of advice. However, as Sandler points out, selling isn't about satisfying your basic wants. It's all about completing the transaction. This method, as strange as it may appear, actually works.

Mirroring, in which you replicate your prospects' body language or voice intonation and loudness, is another strategy you may employ.

You may also listen for the predominant communication style of your prospects, which will be visual, auditory, or kinaesthetic.

In the Sandler Selling method, the upfront contract is the most forceful stage. It's intended to establish a mutual understanding of what will be accomplished during the sales call once you're with the prospect.

Five things should be included in an upfront contract:

Accepting the upfront contract allows you a variety of benefits. It will enable both the prospect and the salesman to ask questions.

Most importantly, it compels consensus on the next stages in the sales process and aids both parties in determining whether the partnership is a good fit.

People are either heading towards pleasure or away from suffering when they make decisions.

To be effective in any sales circumstance, you must have a prospect who knows their problem and is eager to solve it.

To get over this phase, Sandler devised a three-part method.

Amateur salespeople are afraid of bringing up money, although it's the most crucial part of the process.

You'll bring it up early in the Sandler process for a few reasons.

First, suppose there's one moment in the process when they'll be willing to spend whatever it takes to solve their problem. In that case, it'll be immediately after you've made their problems obvious in their minds.

Second, if they don't have the money to pay to get rid of their discomfort, now is the moment to find out. Do it before you spend additional time and energy trying to close.

The following is an example of an excellent beginning phrase to start a conversation:

"Do you have a budget set up for this, Mr. Smith? Is it possible for you to give it to me in round numbers?"

"Mr. Smith, presuming your problem and what I'm proposing is a good match, the cost of my solution will be between $4,000 and $5,000. Is that something that you'll have to deal with?"

In most cases, they will reply in one of three ways.

If they say yes, they'll almost certainly give you their specific budget.

Even if they do, they're more likely to say they don't have a budget. You'll remark something along the lines of "This isn't unusual. What are your plans for this investment?"

Finally, they could be forthright and say they don't want to share it. In such a scenario, you'll reply by bracketing the opportunity by presenting them with a variety of possible investments with you.

Of course, the money and the final choice are controlled by someone at your prospect's firm. It's now your responsibility to figure out who that person is.

Pro tip: Titles aren't a reliable indicator of decision-making skill, so thinking it's the person you're speaking with is a bad idea.

You should adopt the news story method to really grasp your prospect's decision-making process.

What exactly is involved in the procedure? What exactly are the practices? What will the decision-maker be listening for in particular?

When: Does the prospect desire or need to finish the transaction by a certain date? When do you need to make your choice to fulfill any implementation or delivery due dates?

How will the final conclusion be reached? Where do choices get made in an organization? Where are choices decided in terms of geography?

Who is engaged (and what is each person's role) in the decision-making process? Who has the power to sway the outcome? Who makes the final purchasing decisions? Who has the last say?

Why does the prospect make judgments the way he does?

You will then, and only then, propose your solution.

When you give your presentation, you'll start by going through all of the conclusions you came to with the prospect, such as the pain, budget, and decision-making approach agreements.

Then you'll go over the features and advantages of your product or service, focusing on how they help alleviate your prospect's pain—which is the only thing that matters to them. Don't go on and on; simply say what you need to to show that you are alleviating their pain.

You'll go over how to get rid of each of their pain points individually. When you reach the end of the first ache, halt and ask whether they are completely confident that your service will relieve their suffering. Then you may go on to the second source of discomfort.

Then, towards the conclusion of the second or third pain point, take a breath and use the thermometer approach to determine how much they've already sold.

Stop right there and close the transaction if they pick a ten.

If they pick less than six, you'll have an issue to deal with.

"Based on everything you've told me so far, I don't understand why you claim you're a 4 - can you help me comprehend?" you'll ask.

They'll most likely offer you a number between 6 and 9 as an answer. You'll ask them what it will take to bring them to a ten in this scenario. Then show them everything they've requested, but no more.

When they've reached a ten, ask them this easy question: "What do you want me to do now?"

To begin this final stage, Sandler adds, "The sale is concluded when the money is in your bank account." Just because you went out the door with a purchase agreement does not imply it will be fulfilled.

Even after the deal or purchase order is signed, buyer's remorse may set in, and the prospect may cancel the transaction.

One way to reduce the likelihood of this happening is to address the issue directly through a third-party narrative. You'll tell your prospect about a past situation in which a buyer backed out and ask for their assurance that this won't happen again.

Because individuals have a tendency to back out, this will make it much more difficult for the prospect to back out.

That concludes the seven stages to completing a transaction the Sandler way.

Understand that being a dummy and asking many questions are your greatest friends in the sales process, even if you'll be a master of it. If you combine those two items with the seven stages, you'll be well on your path to closing more deals than you ever have before.